Won't somebody please think of children? It's a familiar refrain from conservative Australia. Unless, of course, those children happen to be Muslim. Those ones be damned. 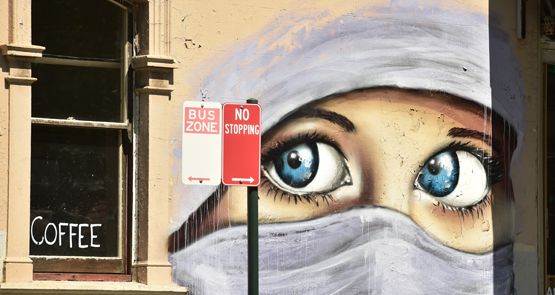 A sheikh in our apartment building in suburban Melbourne gives Koran classes to children, and a few of the women who bring their kids here for lessons wear niqab. After passing each other coming and going a few times, we started to exchange brief greetings and introductions (yes, it’s possible to recognise them despite the face veil, even on occasions when they don’t have the children in tow to serve as an identifier). The kids’ response to these exchanges — equal parts surprise and delight — indicates that they have probably come to expect hostility from strangers on the street.

Of course, the anti-niqab crowd would say that the children are more likely looking to me for rescue from their mothers’ abnormal behaviour, but their pleasure in these interactions encompasses their mothers as well as themselves. A little boy of about five greeted me with immense excitement. “I know you from before!” Then he started telling his mother about it, as though I were a special treat for her, and directed me, “You come with my mother!” His mother and I laughed together at his enthusiasm (yes, niqabis can laugh).

Afterwards, I remembered the kind of language that is being used about Tara Nettleton‘s children after reports that she is seeking to return to Australia from the Islamic State-controlled area of Syria where she has been living with her husband, Khaled Sharrouf.

Sharrouf’s family achieved global notoriety last year after he tweeted a photograph of his then-seven-year-old son holding a severed head. His 14-year-old daughter (or at least someone using her identity) has been tweeting about the delights of living under the so-called Khalifah, and in March triumphantly announced that she had just become the wife of her father’s friend (and fellow Australian) Mohamed Elomar.

The below-the-line comments describing the Sharrouf children as “demon spawn” and hoping for their grisly deaths are only fractionally more toxic than many of the descriptions from politicians, journalists and commentators. Prime Minister Tony Abbot and Immigration Minister Peter Dutton could have responded to requests to repatriate Nettleton and her children by referring to the government’s inability to assist Australian citizens in IS-controlled territory, but of course they didn’t forego the opportunity to display their tough-on-terrorism credentials — even when the terrorists concerned are children.

They will face the force of the law along with their parents, and even if they are not guilty of any crime they may end up in state care. This macho talk further diminishes the already remote prospects of having the children returned to safety in Australia. (Sharrouf himself has shown no desire to return.)

David Penberthy endorsed the government’s response in an article headlined “Australia is not their home anymore”:

“There is every chance that the Sharrouf parents have created the next generation of domestic terrorists, should these children somehow return home.”

Damned, then, for the sins of the father (and the mother) — with no hope of redemption.

But, like it or not (and of course Abbott and Dutton most certainly do not), Khaled Sharrouf is an Aussie as well — a product of the Australian educational, legal and mental health systems, who is now triumphantly and joyfully committing horrific crimes against Syrian civilians as well as abuses against his own children.

It goes without saying that those children must be immensely damaged by their recent experience. That ought to be a reason for facilitating their return, if at all possible, not scoring further points against their already reviled parents.

But why should any of this come as a surprise? Australians tolerate sending children into offshore detention camps to suffer all manner of abuse even when their parents’ only “crime” is to seek asylum by boat. We’re obviously capable of seeing children as monsters, as demon spawn.

If Tony Abbott succeeds in stripping people of their citizenship, I can only imagine that non-citizens cannot be found to indulge in treason; treason being a crime against the State.

The only people to benefit from this preposterous law will be the legal profession. They will have a ball, at the expense of the taxpayer, of course

+ : for LNP: create a enemy then demonise them to the next election and the one after that (the Tampa principle);
– : r.i.p the rule of law for Australia.

Worse still. On Q&A last night there seemed to be quite a few people who interpreted the image of Sharrouf’s son holding a severed head as epitomising all foreign fighters’ exploits. But, like Man Monis, Sharrouf had been engaged in ‘deranged’ activities in Australia for some time, and is therefore far from being a typical IS ‘terrorist’.

I could dismiss a few of our politicians as deranged, but I have very clear memories of John Howard in his 2001 election campaign demonising refugees as people who threw their children overboard – long after the images that this claim was based on had been exposed as fraudulent.

He went on to win an election that he could well have lost otherwise, so I don’t see our current government as deranged – except perhaps regarding their policies in response to global warming.

I confess, sadly, the thought of that child with the severed head as a “monster” flashed through my mind when the story broke: deeper reflection led me to the thought he proably only did what his dad told him. But still…easy to snap to judgements: and I like to think of myself as open-minded and small-L liberal. But you’d hope politicians would think more before speaking.

What can we do, though? What can I in my little world in Albury do? I ask honestly. The ravings of the right seem so toxic…yet some views from “the left” seem equally troublesome as well. Much like the marriage equality debate where abuse is thrown around and any reasonable discussion across the divide seems useless: when did we all become so angry?, and I include myself there. I’ve tried speaking to friends and family on the other side but debate seems useless: people are entrenched, and vociferously so, their views. Perhaps I need to stop reading the news!

Shakira continues with her apologia for the intolerant & inexcusable, shrouding, religious obscurantism & separatism.