Assisting, advising, accompanying. The recent success of Islamic State forces in Iraq and Syria is creating some divisions between Australian neocons. Peter Jennings, head of the taxpayer-funded “independent think tank” ASPI, last week said merely training Iraqi troops is no longer enough — we must send our troops into combat alongside them (“advise, assist, and accompany into battle”), presumably to ensure they at least retreat in good order in the face of vastly inferior IS forces. But former army chief Peter Leahy disagrees. Leahy, who wants us prepped for a 100-year war with Islam, says committing our troops to combat would go “too far”, and he wants Iraqi troops fighting for their country, not our troops.

Enter former Coalition staffer Jim Molan, who has gone from declaring the war against IS “remarkably successful” to a “stalemate” in a matter of months. Molan joined The Bolt Report yesterday (Bolt kindly declined to pretend to be an indigenous person threatening him with a spear) and declared he too supported sending our troops in to fight alongside Iraqi troops. “We have a traditional history of failure of the Iraqi army to … where we’ve trained them in barracks,” said Molan. “Particularly the British in southern Iraq in the second Iraq war, and we pushed them out the barracks and they were destroyed.” Odd that Molan said nothing in 2007 when John Howard boasted of how “the Australian Army has been involved in the basic training of more than 12,500 Iraqi soldiers” and “the Australian Army Training Team is working hard together with Iraqi Army Instructors to ensure Iraqi forces have the capacity to assume greater security responsibilities”. “Such training is absolutely vital to the Iraqi Army developing as a non-sectarian national institution capable of attracting the support of the Iraqi people,” Howard declared at the time.

We have a better name for the strategy proposed by Molan or Jennings: “Advise, assist, accompany into battle, leave, watch the whole joint fall apart because we screwed it up in the first place”.

We’ve all been there. Motoring Enthusiast Senator Ricky Muir has written a blog post on his website titled “unintended consequences of track closures”, arguing that 4x4s should have access to areas like the Tarkine forest in Tasmania. The Senator has quite a way with words, and Ms Tips really enjoyed his opening paragraph — he really knows his audience:

“Have you ever experienced that moment where something which was intended to be a good idea had a different result than you thought? Perhaps for example, you put 3.9 diff ratios in your car to help get it off the line quicker on the drag strip, only to discover that you now have major traction issues on the launch pad and actually lose time.

“Maybe you converted your 4×4 to a straight gas turbo set up so you have a little more power for when it is needed, only to discover you no longer have the range you need to do the trip you have been planning from Marysville, through to Woods Point to Wonnangatta Station before ending up at Dargo.”

We know exactly what you mean, Senator.

Just a coincidence? A tipster at Canberra airport this morning noticed a pattern on the billboards:

“Couldn’t help but notice that three of the four billboards above the QANTAS baggage carousel in Canberra feature huge photos of submarines or destroyers, advertising companies Raytheon, ThyssenKrupp and BAE Systems. One would almost think there was a shipbuilding contract up for grabs.” 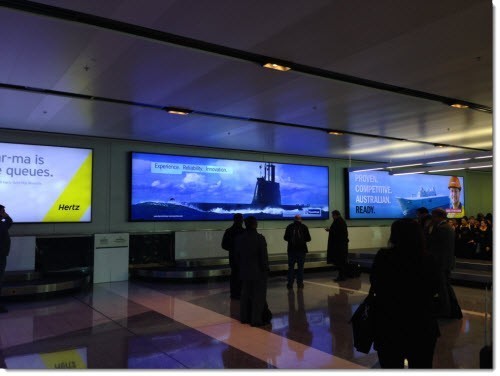 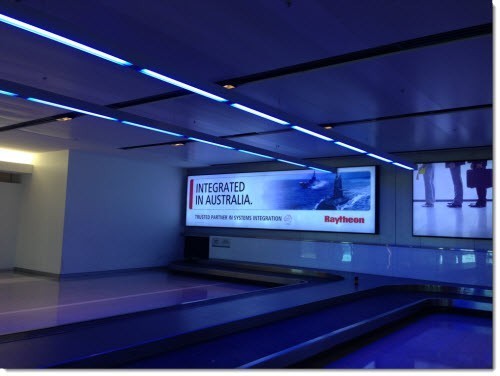 E-book bargain bin. A tipster tells us that News Corp’s giveaways might not be as generous as we think:

“News Corp Australia is promoting a wonderful ebook offering for readers of their Sunday papers around the country — from Mills and Boon, which just happens to be part of Harlequin publishers, which was bought last year by News Corp for just over $US400 million. Beats remaindering the unwanted ebooks through Amazon?”

No Powershop for pensioners. While GetUp has already made more than $1 million from recruiting more than 6000 people to change their electricity to Powershop, we hear from a tipster that the switch is not all it’s cracked up to be. GetUp has already been criticised by some who found the declaration of its commercial interest in the switch a little too subtle, and another tipster had let us know that the for pensioners in NSW, the provider is not covered by the pensioner discount scheme. Victorian pensioners do get the discount.

Where is the danger here? The streets of Richmond in Melbourne were disturbed yesterday by conflicting protests by the United Patriots Front (anti-Islam protesters associated with Reclaim Australia) and counter-protesters Campaign Against Racism and Fascism, with a violent scuffle breaking out and one person found to be carrying a knife. After the protests a Richmond resident found this graffiti on the fence of the local multicultural kindergarten, which is around the corner from where the protests took place. It seems that their targets are now political correctness, “traitors” and four-year-olds. 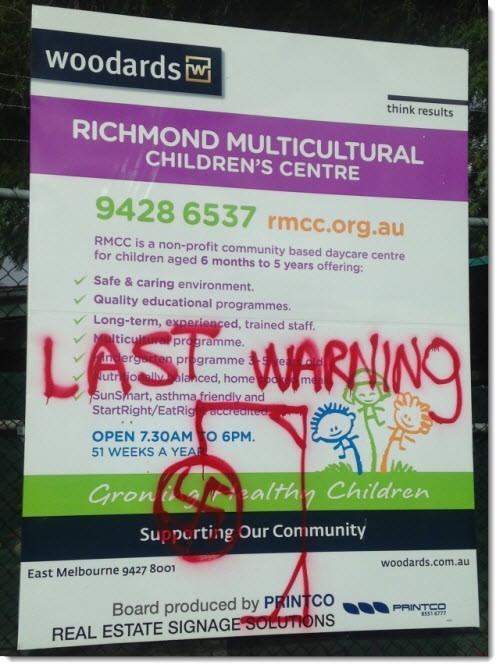 No booze for you. The Royal Hotel at Temora in the Riverina today received a NSW government order to shut its doors for 28 days for repeated underage drinking breaches. The pub’s closure until June 29 was ordered by Troy Grant, Deputy Premier and Justice Minister, a former police inspector based at Dubbo. “Over the past eight years the hotel in question has racked up 11 breaches, including four incidents of selling to minors,” Grant said. His tough application of the law will send waves of apprehension through publicans in regional NSW where teenagers below 18 are regularly sold alcohol at the bar and from bottle shops. Grant, the leader of the NSW Nationals, has given notice he will be uncompromising: “Selling alcohol to minors is illegal — there are no exceptions.” His warning isn’t aimed only at publicans but at his former associates in the police force whose policy is “live and let live” when it comes to the sale of grog at bush pubs. Are we seeing the end of an era?

Going out with a bang. This headline was spotted in Friday’s edition of News Corp’s commuter newspaper mX, which will print its last edition on June 12. As a tipster remarked to Ms Tips “the subs have nothing to lose”. We will miss them. 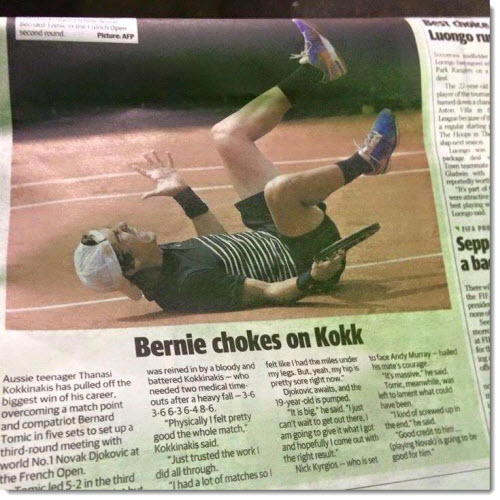 Molan is a conservative, Limited News Party glove puppet – on 7:30 a couple of days before coming out with Toad and Scrott over “Operation Sovereign Borders” as an “independent expert” and didn’t say a thing about that?

Klewso is right. It is amazing and more than a little saddening that Molan’s extraordinary views are not subject to critical scrutiny. Instead our media give him space to repeat the idiocies about our past and future involvement in the Iraq debacle that WE created.