Rundle: the tragedy of gentrification, and London’s ‘ghost bohemia’

Platform 9 3/4 is an abomination, but it is not the real problem with modern London. 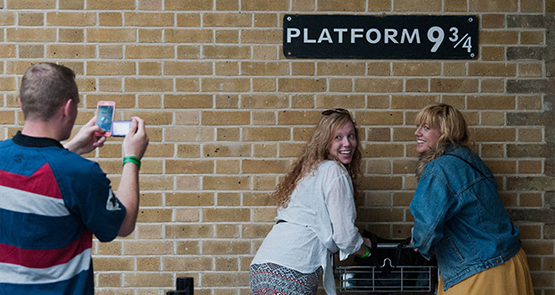 Sometimes, someone has to write the article you had thought of in order to be reassured that you are not going mad. Thus it was last week, that a UK writer for Salon, Andrew O’Hehir, rounded on the city that hosted him with all the bitterness of a disappointed lover. London, he said, more or less, was over, and the degree to which it was over was symbolised by Platform 9 3/4 at King’s Cross station. Here’s O’ Hehir:

“Nothing quite so blatantly sums up the victory of neoliberalism in 21st-century London, and that city’s relentless commodification of every aspect of its literary and historical legacy, like Platform 9 3/4 at King’s Cross. If anything, the vulgarity and banality of Platform 9 3/4 are too blatant; it’s a crack in the facade that demonstrates how thoroughly London has become Londonland, a nearly convincing scavenger-hunt simulation of itself, chock-full of royal bones and references to Dan Brown novels.”

Reading that was like a liberation, because, passing that tourist trap many times myself en route to getting a train, I had felt the same sense of dismay and vague depression and the great sense of whooshing as all air and meaning left the place. That a city such as London should be a place for people to take endless photos of themselves is one thing; that the souvenir shops should clog the central city is of the same order; but to have a great municipal body such as King’s Cross station and National Rail incorporate it into the architecture of the station seems another thing entirely. One feels displaced by it, as if the act, mundane and instrumental, of rushing for a train had become a support act to the tourist tableau.

King’s Cross station, the place itself recently refurbished after decades of torpor, is the sort of place that is simultaneously a functioning station, and, with its magnificent terminal double arch, with the iron cathedral of the platforms behind, a tourist attraction by virtue of being a functioning station. It even has its own real quirk — a platform ‘O’, which has existed for more than a century, the result of some 19th-century idiosyncrasy — arising organically from its history. Why an irritating tie-in with a book? Why a statue of Paddington Bear at Paddington station? And so on.

Why then not write the article — about the way in which London has been made over for the interests of anyone but its own populace — which, having spent 12 of the last 18 years here, albeit coming and going, includes myself? There’s always been something that held me back. It wasn’t the thought that claims of authenticity are somehow spurious though they are — almost every cosy Victorian-style local pub is really a refit, a simulacra, the real Victoriana was torn out in the ’50s and ’60s and replaced by arid bare-wood walls. The Trevi Fountain is an obvious Renaissance Disneyfication of Rome to rob gullible pilgrims of their coins and so on — but that platform 9 3/4 wasn’t the main culprit.

Its cheesy demoralising air would not have been so in a different context, it seems to me (something I have only realised since reading O’Hehir’s piece). Were the city otherwise, platform 9 3/4 would be something else — merely quirky, even generous in its frivolity. What makes it so awful is what surrounds it — quite literally in King’s Cross station itself. As part of its renovation, King’s Cross had a side annex put on — a magnificent semi-circle — which is supported from a single core column of hundreds of white filaments, which rise and fan across the roof as supporting elements. And in that simple and austere work they have put — a shopping mall and a food court.

The dozens of high-end outlets engulf the station itself, crowd out its collective and secular-sepulchral spaces with the invocation to spend. One’s guard is down, unlike in a real mall, which is surely the point; one is exhausted by the semiotic assault. It’s worse in St Pancras, the station next door. There, where the Eurostar comes in, the station disappears altogether behind two rows of luxury goods outfitters. There is little signage between the three different privatised rail networks, because that would disrupt the Gruen transfer process of disorienting you to maximise purchase. The thing is not the thing it is, to a degree of maximum dysfunction — all the normal shops you need in a railway station, chemists, newsagents, everything that gives the place its bustle — are hidden at the back.

Who’s all this for? It’s for no one, really, save for the subject conjured into being by the shops themselves. The genuinely well-heeled are not going to shop in St Pancras station.

That is London now, in microcosm. What has happened to the city, over the past decade, has been extraordinary: London, having come to a creative peak with a reasonably democratic spirit in the mid-’90s — the so-called “cool Britannia” period, as much as that made such a spirit possible — has been dissolved, not merely by the currents of global change, nor even by an inadequate response to them, but also by a seemingly concerted effort to kill off any point from which it might rally.

The city is becoming a vast mausoleum, a diorama of itself, in which its cultural and bohemian capital is deployed as image in the selling of a fantasy lifestyle to those servicing the vast industries — financial services, startups, online retail, etc, etc — who demand dull and undifferentiated work, which must be packaged. The life, which provides the motifs — neighbourhood London, boho London, edgy London — is being crowded out by the process itself.

Neighbourhood after neighbourhood in central London is losing even a vestige of the balance between everyday life, and a more prosperous, new class presence. Of course this has been happening for decades, and people have been complaining about it for the same amount of time — but the fact of that shouldn’t obscure the possibility that there are moments when thresholds are crossed.

People say of Paris that the centre of it became a mausoleum decades ago, losing its distinctive pattern of living — in which the poor, middle and well-off might live in the same five- or six-storey terrace — as the poor became squeezed beyond the Boulevard Peripherique. London was always counterpoised to that experience, not least because its sheer size seemed to render the same process impossible.

But those who believed that did not count on the sheer mass velocity of globalisation — and in particular the tides of movement unleashed in the EU by expansion and freedom of movement. London has swelled to an official population of nearly 9 million, up more than 1.5 million in a decade and a half, and with barely a fifth of that covered by new home building.

The lack of new build is ceaselessly referred to, but it’s a bit of a furphy, since what there was of it was going on in the outskirts. And everyone wanted to live close in. At the same time, 20 years of selling off council properties to occupiers had culminated in a more comprehensive process wherein whole estates were sold off (such as the vast Heygate estate near Waterloo station, home to thousands, and sold off for about a 50th of the value developers are realising from it with private apartments).

There are other processes — the vast Crossrail project, putting a new railway station at the edge of Soho, and turning that inner area into a deadened extension of Oxford Street — and the knocking-through of terraces that once held 30 or 40 flats into one home, three terraces long, for a Russian or Qatari who does not even live there (but by virtue of the residence does not need to pay tax in their own country), to name but two. But it is, above all, the class cleansing that has killed the city’s spirit, removing much of the sense of vestigial equality that gave the place life.

The poor create culture, the rich consume it. The poor because they have no choice, having no money, but to innovate and improvise, from pub rock to street art, cabaret to writing and much more. Once it bubbles up from there it is packaged and sold on. People who have an idea what the city is, know this, and they keep a balance between the various groups — knowing that the ultimate democratic right is to have equal access to the centre of the city, the freedom of the streets. In driving out the poor, many of whom had lived there for generations, the killing of the city had begun.

What that has done for the place is that the rich — or their representatives in the London assembly, the city’s council — stopped caring about that. Last week, a friend noticed an ad for new apartments in Morning Lane, Hackney — a few streets that constitute a neighbourhood going back centuries — which featured the standard bearded, granny-glassed hipsters promenading.

The ad wasn’t meant for them — they couldn’t afford those apartments — but for the next tier of professionals, from whom hipsterism would constitute some sort of authenticity. Yet, as she noted, “the hipsters haven’t made it here yet”. The entire ad was a ghost bohemia, constructing that part of an area’s transformation as a middle stage that could be dispensed with, in going straight from remnant working-class life to deathful apartmentism.

That’s a very British thing, too: the country that turned advertising into high art has always been more postmodern than the continentals, and it’s that which ties the mass process of change, the endless apartments and shopping opportunities to Harry Potterisation, the creation of a simulacra city within the city, which the city then falls into, like a station consumed by a platform between the platforms.