Media briefs: ABC restructure backlash … citing The Onion … everyone gets a paywall …

ABC faces a backlash. And other media tidbits of the day.

Regional shakeup backlash. Tensions over the ABC’s new planned regional restructure escalated significantly over the weekend, after a union meeting on Friday had many ABC staffers expressing significant fears over the restructure. In a statement by Media Entertainment and Arts Alliance members, staff noted that while the ABC has said there’ll be no “net” job losses, they had been assured for months that redundancies would be only minimal, only now to hear 50 people will have to reapply to keep their jobs.

“We condemn the announcement that 50 staff will have their positions made redundant and then be made to reapply for similar or roles of less complexity and standing in their workplaces, and condemn the process by which the ABC is proposing to do this.”

The body also noted the loss of several key positions, and also expressed deeps scepticism about the catch-all management role proposed to replace the old roles in regional bureaus:

“Members hold grave concerns about the newly-proposed chief of staff position. The position description the ABC provided for the job rolls a number of key managerial, editorial and training roles into one, and we are unable to see how one person will be able to meet the brief the ABC have proposed.

“Further, MEAA members condemn the lack of clarity that remains regarding reporting lines, and the lack of detail the ABC has provided in their proposal regarding day-to-day operation and management of staff on site and the gathering of news … and entirely oppose any move from the ABC to cut pay for current staff as part of this restructure.”

Everybody gets a paywall! No wonder Time Inc has moved to start a paywall for its magazines. US magazine news-stand sales in the US and Canada fell a nasty 14.2% in the March quarter of this year, from the first quarter of 2014, according to US group MagNet, which tracks magazine sales.

And MagNet’s view is that with the fall in sales and other trends the outlook for the North American magazine industry is gloomy: “Unfortunately, we see nothing on the horizon that provides hope that newsstand sales will have a significant turnaround in the foreseeable future,” MagNet said in its release. “The continued rise in social media and mobile technology use is influencing how consumers view and absorb content,” the group added.

Time CEO Joe Ripp said on Friday the strategy will begin with Entertainment Weekly’s EW.com, but will be repeated at other Time magazines such as Time, People, Money, Health and Real Simple in the next few months, once they see how consumers react.

Time said the paywall offer will include a monthly unlimited Web access pass, new fee-based apps, and an “all access” bundle with web access, print and digital magazine subscription, newsletters and more. Cost wasn’t mentioned by Time on Friday, but US media reports suggest it could be as low as US$20 a year for EW, with another US$5 for a subscription to the print magazine. — Glenn Dyer

Network Ten: will they, won’t they? The sharemarket sends a similar story to the one it has been sending for months now (and ignored in a succession of stories in the AFR and The Australia). On Friday, Network Ten’s share price rose 1.5 cents, or nearly 7%, in one of the biggest rises of the day. That means investors reckon there’s no chance the Foxtel deal will be done at 18 cents a share. If the board and Foxtel try, there will be a chorus of protests from shareholders, led by Lazard, the big US fund manager and most aggressive buyer of Ten shares in the past couple of months. Foxtel and the Murdochs will have to offer more to win the deal (and raise more money for Ten into the bargain), which is what the tortuous negotiations are supposed to be about, not gifting the company to the Murdochs.

And by the way, the AFR published a lengthy story by James Chessell (described as an “Inside Story”) on Pages 1, 36 and 37 on the soap opera that is the sale process of the Ten Network. the story took several thousand words to tell us that Bruce Gordon, the 14.9% shareholder in Ten and owner of the rival WIN (regional TV affiliate of Nine), was proving to be difficult, and frustrating every attempted deal. As of this morning, there’s still no deal.  — Glenn Dyer

Video of the day. Eight years on and still people are falling for The Onion‘s withering satire. This time it’s former FIFA vice-president Jack Warner, lamenting what he thinks is some blatant American hypocrisy in the handling of FIFA’s ongoing corruption scandal … 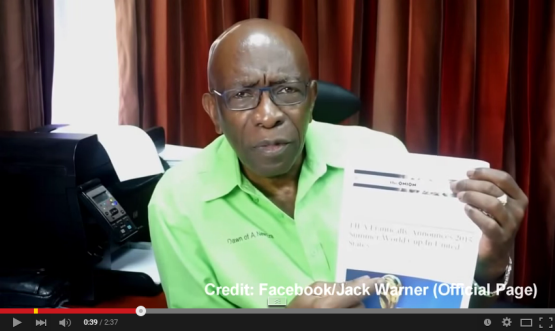 Front Page of the day. The Herald Sun‘s campaign on family violence has provoked a strong policy reaction from the Victorian government. Campaigning journalism done well: 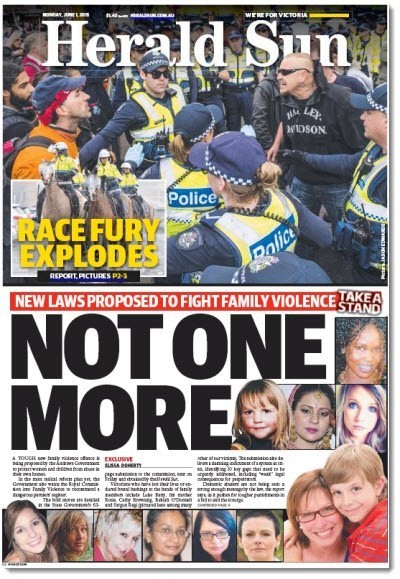