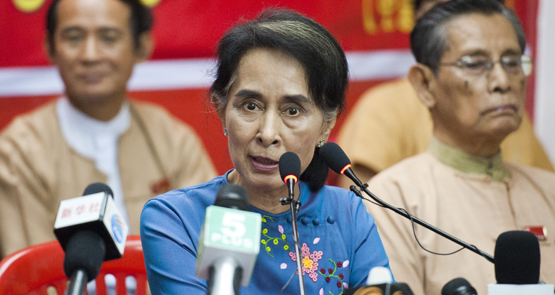 Last week, The Australian’s formidable south Asia correspondent Amanda Hodge scored herself a global scoop when the Dalai Lama took the Myanmarese opposition leader to task during an interview that was part of a larger project on Buddhism that Hodge has been researching. The story was picked up by pretty much every news outlet of note and has helped ratchet up pressure on Suu Kyi.

The Tibetan spiritual leader said he had spoken to her twice in recent years on the plight of the Rohingya. “It’s very sad. In the Burmese case I hope Aung San Suu Kyi, as a Nobel laureate, can do something,” he said. “I met her two times, first in London and then the Czech Republ­ic. I mentioned about this problem and she told me she found some difficulties, that things were not simple but very complicated. But in spite of that I feel she can do something.”

His comments coincided with a meeting in Oslo last week of Nobel laureates, during which others joined the chorus of people outside Myanmar taking Aung San Suu Kyi to task. But inside the country, it’s barely an issue. The Rohingya have few friends among regular Buddhist Myanmar people. Anti-Muslim feeling is strong, and last Tuesday in Yangon radical monks staged an anti-Muslim march attended by several hundred people.

Suu Kyi and her National League for Democracy believe that they can win the election scheduled for October or November this year. That is very much their primary focus, and it is unlikely there are many, if any, votes in supporting the Rohingya. The party could well lose votes if seen to be “Muslim lovers”, as one senior NLD MP described it to me in Yangon last week.

The flight of the Rohingya from the Western state of Rakhine in Myanmar, where many have lived for generations, has gathered pace over the past three years as violence against them has forced many into squalid refugee camps.

Like Myanmar’s military-backed government quasi-civilian government, which replaced direct military rule in 2010, Aung San Suu Kyi’s National League for Democracy opposition party does not even recognise the Rohingya as a distinct ethnic group.

Both sides of Myanmarese politicians find it hard to agree on much, but on this they are as one. “Bengali Muslims” is how they refer to the Rohingya, and both sides say that many of them should be sent “back” to Bangladesh.

As many as 250,000 live in official and unofficial refugee camps on the Bangladesh side of the border two, most having fled Myanmar’s state of Rakhine after military harassment during 1991 and 1992. About 140,00 now residing in camps in Myanmar, having been hounded out of their homes and businesses by violent mobs. Almost 300 have been killed in sectarian violence since 2012 — at least, that is the official figure.

The only time in recent months that the Myanmar opposition leader has addressed the growing concern among her international supporters was in an in an interview with Canada’s Globe and Mail newspaper in April.

“I’ve always been a politician. I’ve never said that I was a moral organization or anything like that,” Suu Kyi said in the interview. Fair enough, and the pressure must be stultifying.

Last Friday, the Myanmarese government at least attended a regional summit in Bangkok, attended by countries around the region as well as observers from United States, Switzerland, United Nations and International Organization for Migration aimed at addressing the refugee crisis. But Myanmar’s government remains in denial as to its role in the unfolding tragedy.

A number of senior Australian bureaucrats also attended the forum, although, as usual, there has been no official response from the Abbott government. Australia seems as keen as everyone else to avoid being dragged too far into this ongoing crisis. Of course, it’s much easier when the desperate people involved are as unloved and unwanted as the Rohingya.

Suu Kyi’s critics have long accused her of being very much a Bamar, Myanmar’s main ethnic group from centre of the country. In the past they have criticised her failure to try and play a part in the torturous peace process with the ethnic militias that ring the centre of the country. There has been some success, but fighting continues to be particularly intense in Kachin state, and there are regular outbreaks in Shan state.

But the conflict with the Rohingya is different to the other regional conflicts in Myanmar, which are effectively a string of mini civil wars that have racked the country for the six decades since independence from Great Britain, and long before the military took control.

Rather than an ethnic conflict, this one is religious, making it all the more dangerous.

Perhaps the taste of some sort of victory later this year — even though Suu Kyi is unable to run for president — is so tantalising she is willing to risk some of her moral authority, at least in the international sphere. There is an argument that an NLD victory will generally reduce repression around the country, and that is worth the silence.

Still, the disaffected Rohingya must surely be ripe for exploitation and radicalisation by Muslim groups such as the Islamic State and al-Qaeda.

If this should happen — and any full-blown attacks inside Myanmar would surely put the timing of this year’s election at risk — then Suu Kyi and the NLD must wear a portion of the blame.

It is long past time someone called Suu Kyi for what she is, a stooge of the US and UK governments. The NGOs that have supported her for years and directly and substantially underwritten by the UK and US governments, most prominently the National Endowment for Democracy. This is a tool of the US government widely used in the promotion of so-called colour revolutions. Another source of support is George Soros’ Open Society which promotes the same goals as the NED.

One of Suu Kyi’s most vocal supporters is a monk who goes by the name of Wirathu, who describes himself as Burma’s Bin Laden. He is a violent anti-Muslim racist psychopath. She has basically gotten a free ride from the Western press for a long time. when one looks at her sources of foreign support that is not a mystery.

Her silence on the genocide being perpetrated on the Rohingya should not come as a surprise.

Michael, instead of much the same material re-appearing day by day, why not do a concise summary of events there over the past (say) Century?

So often the icons of the bien pissants turn out to have feet of clay and less than pleasant hinterlands – the fascist Alexander Solzhenitsyn so acclaimed by Langley VA and fellow travellers quickly became an embarassment once in the West with his crazed Xtian views and demand for a return to Mother Russian nativism,considered Putin too soft on dissent and excoriated the West for decadence.
Be careful whom you put on a pedestal.