Michelle Obama popularised the idea that “food deserts” with too few healthy food stores (and too many fast food outlets) are a key cause of bad health outcomes, but it misses the underlying problem 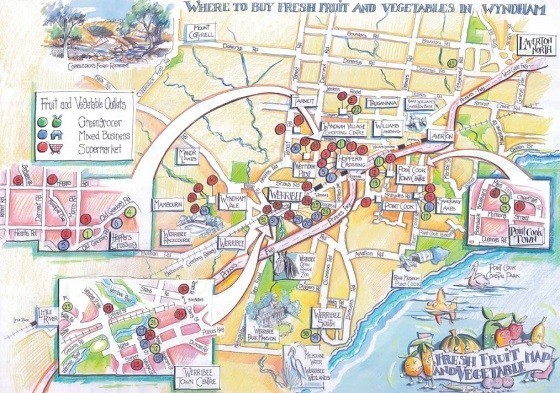 That comparison might look ominous at first glance, but as I’ve discussed before, the geography of food access has little to do with topical issues like diabetes and obesity.

In this case, there’s no reason to think 34 fresh food shops is too few. It’s one fresh food outlet for every 1550 households; that’s not a gross deficiency in a car-oriented outer suburban growth centre like Wyndham.

It’d be amazing if there weren’t a lot more fast food outlets than fresh food shops, just as there are vastly more clothing retailers than mercers like Spotlight.

The fresh food shops identified by the council are mostly supermarkets such as Coles, Woolworths, Aldi and IGA; the greater scale economies and market restrictions associated with the grocery industry means there’s bound to be many fewer of them than fast food outlets.

I discussed the “food deserts” claim before when Michelle Obama decided to kick the can. As I noted then, research in the US indicates that that low-income areas don’t in fact have a significant shortfall in supermarkets and grocery stores.

Dr Helen Lee of the Public Policy Institute of California studied a national sample of 11,400 children over the period from kindergarten to fifth grade and compared changes in body weight against their access to various food establishments. This is an important study because it’s both longitudinal and national.

She found the density of fast food convenience stores in predominantly minority and poor neighbourhoods is indeed higher than in more affluent and majority areas, but so is the density of supermarkets, large-scale grocers, corner stores and full-service restaurants.

“The more relevant factors for understanding unhealthy weight gain are the socio-demographic characteristics of children and families and proximate behaviours within the home context.”

The director of Yale University’s Rudd Center for Food Policy and Obesity, Kelly D. Brownell, agrees. She told the The New York Times that “it is always easy to advocate for more grocery stores … But if you are looking for what you hope will change obesity, healthy food access is probably just wishful thinking.”