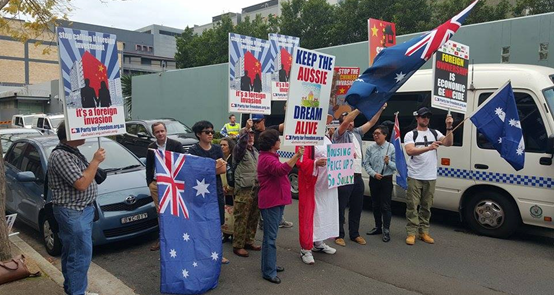 While anti-Muslim protesters clashed with anti-anti-Muslim demonstrators in Melbourne on the weekend, Australia’s right-wing Party for Freedom’s rally in Sydney against Chinese investment in the property market did not make much of a splash.

Before the rally, the Party for Freedom distributed around 5000 pamphlets throughout Sydney, advertising the rally to the general public. It was made to appear that Chinese nationals are a primary cause of rising property prices throughout Australia and also within Sydney.

However, despite all the well-stylised propaganda, both online and at the demonstration, it was more whimper than bang.

It was set to begin at midday on Saturday. By 12.05pm there had not been any visible rallying activity. Eventually, there came a small group of about a dozen individuals, marching towards the barricades holding placards with a vicious message.

There were more anti-protesters, media and police officers than members participating in the rally. The turnout was undeniably lacklustre.

Chairman of the Party for Freedom Nick Folkes was asked whether his campaign was resonating with the Australian public. “It’s not so much about the number that we’ve attracted here today. But it’s the coverage that we’re getting and the conversation that we are starting,” Folkes said.

Much of the discussion prompted by media officials resulted in responses that drove home the message of disdain towards Chinese nationals, the role of the Australian and Chinese governments, and how foreign ownership is the road to economic genocide.

Folkes likened the perceived growth of Chinese investment in areas such as Chatswood as both a “ghettoisation” and ethnic cleansing.

Andy, a supporter at the rally, discussed his opposition to non-English-speaking Chinese nationals coming to Australia and “ethnically cleansing” the local Australian population.

“The government is not doing enough to stop the flow of Chinese nationalists,” said Andy.

Another supporter at the rally, Jim, was concerned with the sovereignty of Australia and said Chinese nationals were a fundamental reason as to why property prices had been rising, in Sydney specifically.

“It affects the supply. It has distorted the market very badly,” said Jim.

There was a reasonably large police presence aiming to separate the anti-rally protesters from the supporters of the rally.

One member of the opposition, Nissa, was there to protest against racism in Australia. “This group is trying to put forward the idea that they are purely concerned with foreign investment in housing, which is really just a smoke screen to the continual racist attacks that they make,” Nissa said.

The rally signified at least two things. Firstly, that there was limited public approval of the general message. And secondly, the message itself was met with passionate opposition.

Right-wing nationalist groups have seen some success throughout Europe within recent years, but Australians have voiced continual opposition to Pauline Hanson’s One Nation Party, as well as significant disapproval of movements such as the Islamophobic Reclaim Australia.

The intensifying public activism of right-wing groups in Australia could signify the beginning of a new political era at home.

Tanya Plibersek, Deputy Leader of the Labor Party and federal member for Sydney, discussed her opposition to the rally that has seemed to pit Australians against each other. “Australia is one of the world’s most successful multicultural communities. That’s something precious and worth protecting,” Plibersek said. “It always troubles me when I see organisations trying to profit by turning Australian citizens and residents against each other.”

Folkes says it is a shame we have no patriotic parties in the Australian Parliament. Maybe that is just the way we want it.

The whole event was farcical, but then again so are most ‘protest’ events in Sydney.

Do the anti-Chinese brigade wish to drag Australia back 150 years? It was fear of the Chinese that caused Australia to
advance the ‘White Australia Policy.’ And with it we became a country of spavined and mini-politicians capable of intoning “Two Wongs don’t make a white;” The late Arthur Caldwell being responsible for this little gem.

Michael West has written a good article in today’s Age re this issue, he seems to think that the govt could solve the problem easily by investigating the source of the payments for Aust properties as he thinks that they may be ‘irregular’ according to Chinese financial rules.

Venise, if you had a sense of humour you might have had a chance of understanding the background behind that “little gem”. And speaking of background, it’s a shame you remain unaware of Caldwell’s close and warm relationship with the Chinese community, helped in part perhaps that he was fluent in Chinese without parading it like a holy relic as another more recent pollie did.
I shan’t suggest you TRY to learn more about the White Australia Policy because you’d never manage to rein in your emotive prejudices.

This reminds me of those anti-japanese investment protests on the Gold Coast in the late 1980s. Look what happened to Japan a few short years later. Where are they and their economy now? It’s seems the protesters are just being somewhat hysterical…