Wednesday’s GDP figures could spell the end of Hockey

Next Wednesday's GDP numbers could be a disaster for Joe Hockey, with negative growth a distinct possibility, Bernard Keane and Glenn Dyer write. 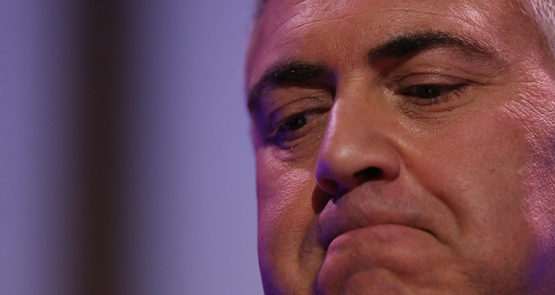 After a successful reboot of the Abbott government in the budget — creating Abbott 2.0, the cheap populist — Treasurer Joe Hockey’s stocks might be thought to be on the up, but yet again everyone, including his colleagues, is wondering whether he has the discipline for the job.

The correct response for Hockey on Q&A to the question from an “activist” (Abbott’s word) aka student and online petitioner Subeta Vimalarajah, was to say that it was ridiculous that condoms weren’t subject to GST while tampons were and that would be easily remedied by removing the exemption, not extending it. Indeed, everything should be subject to the GST, and the childish legacy of political history footnote Meg Lees’ efforts to socially engineer Australia by inserting exemptions into the GST should be removed.

Instead, Hockey created the impression of another gap between himself and Abbott and drew attention yet again to how, when you don’t really know what you stand for, it’s easy to look like a weathervane. At the moment, the only thing that looks likely to emerge from the government’s tax white paper is an exemption of sanitary products.

Next Wednesday now looms as a much more serious moment in Hockey’s treasurership. That’s when the March quarter GDP result will be revealed, and there’s a real chance it’ll be flat or negative. Beyond that, there’s a chance of a recession over the coming year, but this is a government living from one moment to the next, and a bad GDP number on Wednesday morning will be a disaster for Hockey.

Yesterday’s capital expenditure figures showed us both non-mining as well as mining firms are planning to slash investment in the year ahead, cutting total investment spending by 21% — an outcome that is at odds with the budget forecast of a 4% lift in non-mining investment. Mining companies plan to cut investment by 34.9%, manufacturing firms by 24% and other firms by 6.1%. In question time yesterday, Hockey blamed Labor for the numbers, saying they reflected the election of the Victorian and Queensland Labor governments — although it was Hockey right before the budget who declared “our economic plan is working“.

But it was an unremittingly bad set of numbers (even the growth between the first and second estimates for the year was based on a write-down of the first estimate) that means the next few days of data reports for the March quarter will be carefully studied for signs of whether Wednesday’s GDP will be low, flat or even negative.

A negative or flat number would be a massive shock to confidence, which has just started to recover courtesy of Hockey’s handouts to small business in the budget. Suddenly the talk would be of recession — and once consumers hear the “r” word they instinctively close their wallets. It would also put on loudspeaker the mutterings about Hockey’s position — and whether he should be replaced by the remorselessly self-promoting Scott Morrison or Malcolm Turnbull.

Bear in mind that the last time we had negative growth was in the March quarter of 2011, as the Queensland floods hit output in that state’s coal industry and rural sector (and heavy rain in Western Australia affected iron ore exports). The horrible 1.2% slide into the red that quarter grabbed the headlines, but by the December quarter last year that had been revised to a much less damaging fall of just 0.3%. A weak GDP number may not survive revision in future years — but no one will be thinking that at 11.30 on Wednesday morning.

Yesterday’s equipment, plant and machinery spending spending numbers — the only category that feeds directly into the GDP calculation  — fell 0.5% during the first three months of the year. Coming on top of the 2.4% fall in Wednesday’s construction work figures for the March quarter, with much of that also due to the slide in mining, and the failure of housing construction to grow quickly enough to offset that fall.

Next week will bring reports on retail sales, building approvals and the trade account for April (i.e. after the March quarter) and the final round of March quarter data on business stocks, wages and sales and company profits on Monday. The big thing to watch next week will be the size of the inventories adjustment. In recent quarters, it’s been swinging from positive (which boosts GDP) to negative (which detracts from it). A positive number could keep the economy line ball, or slightly in the black in the March quarter. And the current account will be weak, possibly slightly positive or negative, while government finance (Tuesday) is a magic pudding whose influence is only clear when the GDP figures are released.

If the number is positive, it won’t be strong enough to lift our overall rate of growth. The December quarter grew 0.5% for a 2.5% growth rate through 2014. A slightly positive reading (0.1 to 0.3%) on Wednesday will pull growth below 2% as the strong 1.1% result from the March quarter last year falls out. If that’s Joe’s economic plan working, you wonder how grim things would be if it weren’t.

Remember when some people saw him as a “shining light”?
…… Now he’s a sputtering candle?

There are even worse prospects on the horizon. China has recently signed very large deals with a Brazilian iron ore producer, reducing thereby demand for Australian iron ore with devastating consequences for Australian foreign income and GDP. Also this year China, Russia and other Eurasian nations have signed up for an estimated $8 trillion of infrastructure investment. That will open up a huge potential for all the natural resources that we currently produce.
Do our policy makers really believe that they can pursue an anti-China, anti-Russia foreign policy without their being economic blowbacks? The tampon tax will be the least of the Coalitions worries as the price of lackeydom to the US begins to be felt, and very soon.

With all this potentially embarrassing stuff coming out next week, what’s Toady’s next distraction?
Are they working on it already in PMO Hall?
Who can they pick on next?
Who can they blame – No Surprises/No Excuses aside, of course?
…. Can’t wait for next week’s instalment of “Daze of Our Lies”.

The only things the Government stands for are less tax, less spending and less government (and tribal wars with political opponents). Australians have indicated that they don’t agree with these attitudes/policies and the Government has nothing else to offer. As they don’t stand for anything else they are ill-equipped to deal with the complex problems that Australia faces.

As James O’Neill and JMNO have both said, this isn’t about Hockey. It says more about your notion that the government can wave a magic wand and fix it when it can’t.

Replace Hockey if you like or even put Bill’s team in and the task is still extremely difficult.

Increasing flexibility in the country’s economy is the best measure in the long term, which you and Labor oppose. Then there’s the government deficit, but that’s getting bigger under Hockey – something you’ve ripped into him over already.

Stop the shallow politics and say something that might make a difference if you know.