No questions here. A tipster tells us he tried to to call MP Jason “genetically modified orgasms” Wood to ask for his views about same-sex marriage but didn’t have much luck:

“Yesterday my daughter who is a local high school teacher rang our Federal MP Jason Wood’s office to inquire how he would vote on the Marriage Equality issue. Interestingly she was told by staffers that Mr Wood had not informed them which way he was leaning and she should send him an email directly. She did and received no reply. From there she contacted him via Twitter, again no reply instead he simply blocked her.

“I was pretty incensed about this as we are constituents and at least deserve the respect of a professional reply. So I too made contact via FaceBook to inquire which way he is likely to vote. My comment was deleted and when I posted again pointing out he had blocked my daughter on Twitter I found myself blocked from commenting on his Facebook page. Watching his page last night this seems to be the norm, if anyone questions his position the comment is deleted and they are then blocked.”

Our tipster says that he and his daughter weren’t trolling and were respectful, including her tweets: 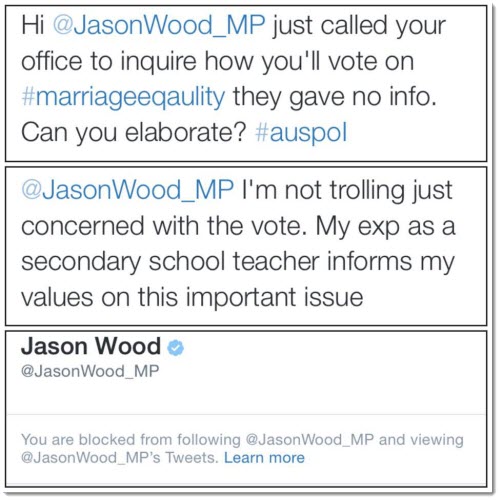 We called Wood this morning to find out why people asking about same-sex marriage were being blocked and he told us:

“My social media accounts are clearly used for me to distribute messages to those who are interested in what I’m doing. It is not a platform for others to push their political agendas against myself or the Government, and those who choose to do so will have their comments/accounts block or deleted — just as if someone were abusive or threatening.

“In relation to same-sex marriage, local Labor activists are attempting to politicise the issue creating a political division — sadly this will not help the plight of those supporting same sex marriage. I am very much looking forward to hearing the views of constituents of La Trobe … to understand how my constituents would truly like me to vote on the issue. I have already publicly stated that I support a conscience vote, but in being a responsible representative, I have not declared which way that vote will go until I get a decisive response from my electorate.”

Debt Monster. We know it can be hard for politicians to think of something original to get the public’s attention to their message, but perhaps the opposition in Western Australia has taken it a bit too far. This week Labor Leader Mark McGowan has been taking a new friend to his media appearances — the Debt Monster. In what seems like a Cookie Monster gone wrong, the idea is to highlight the state’s debt position under the Barnett government. 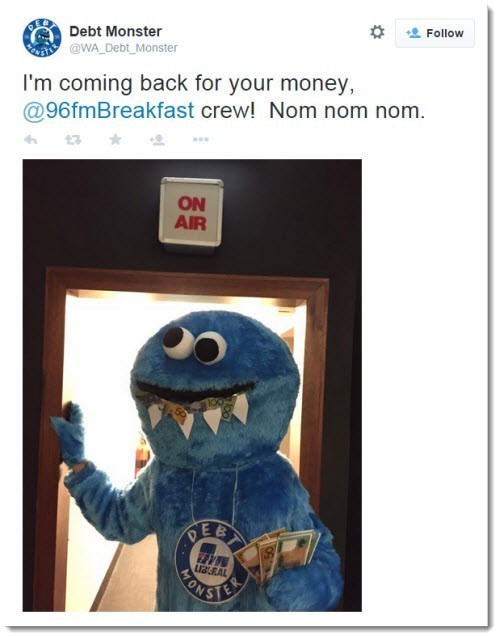 The Debt Monster could work, but we think taking it on buses where it yells about light rail won’t win Labor any friends (or votes).

Rinehart could fall even further. The BRW Rich List is put to bed a few days before release, which has caused problems in the past when elderly Rich Listers die in the week leading up to release. This year’s list is topped by Gina Rinehart, and although she’s still with us, yesterday’s court ruling (awarding management of the $5 billion Rinehart family trust to her daughter Bianca) could have a big impact on her wealth.

Ms Tips wondered if losing the $5 billion trust should mean Rinehart swaps places with second-placed Anthony Pratt on the list, but was told by an insider that the wealth of families is generally considered together in the Rich 200. In Rinehart’s case, lumping her in with her children might not be wise. Nonetheless, she’s certain to appeal the court ruling, so the $5 billion wouldn’t necessarily be taken out of her top line $14 billion listing right away.

The ruling could, however, cause her to lose her spot as Australia’s richest person by this time next year. Already Forbes’ contributor Tim Treadgold (Forbes of course has its own Rich List) reckons the ruling could cut 24.3% off Rinehart’s fortune.

Rinehart’s wealth has been falling rapidly in recent years, largely due to falls in the price of iron ore. Like most richies with assets in mining, her Rich List valuation has never been about money in the bank, but rather, ore in the ground.

“Today’s Financial Review magazine — the annual Rich List edition — gives a chilling insight into how journalism is now subservient to the interests of advertisers. The first story in the magazine is a glowing interview with Australian Test captain Michael Clarke, who talks several times about his great relationship with his sponsor, watchmaker Hublot, whose double-page ad spread appears five pages earlier. Then we come to magazine’s cover story — a big, gushingly positive five-page interview across America with Australia’s richest man, Anthony Pratt, written by AFR staffer John Stensholt — who, it is revealed at the end of the story ‘travelled to the US with Visy and Pratt Industries’.”

No Land Tax investigated. Yesterday, we reported that No Land Tax Party workers were concerned that the Fair Work Ombudsman wasn’t investigating their case, but yesterday afternoon the FWO released a statement saying it was taking the matter “very seriously” and that an investigation was continuing, including into “potential enforcement actions” against the party’s secretary Peter Jones. The statement didn’t mince words when it came to Jones:

“Mr Jones is not fully co-operating with the investigation and has been asked to meet with Fair Work inspectors to provide further information. Mr Jones has made misleading statements to his former workers regarding their eligibility for Fair Entitlements Guarantee assistance.”

ABC radio bosses doubt their chances. Yesterday we told you about the radical shakeup in management at the ABC’s regional division. According to local radio sources, many of the station managers believe they’re unlikely to be successful in applying for the chief of staff positions, as their experience is all in radio, and it’s anticipated such positions will need digital experience as well. Needless to say, many of these senior radio managers are afraid of being made redundant — a possibility the ABC didn’t rule out in meetings this week.

Radio stars kill it with great video. Fans of RN Breakfast got to see a new angle to Fran Kelly, James Carleton and Gregg Borschmann this morning, as the crew uploaded a video of themselves lip-syncing to Video Killed The Radio Star. It was an homage to comedy group Sketch She, who were featured on the show this morning after their video lip-syncing to Queen’s Bohemian Rhapsody went viral, clocking up more than 23 million views.

We called RN Breakfast’s Executive Producer Sharon O’Neill to get the goss on the video, and she said, in true ABC style, the video was made very “efficiently”, with just a few takes in an hour yesterday afternoon. The costumes were scrounged together from the ABC wardrobe department, although Carleton refused to wear the original red dress chosen for him. O’Neill says “James didn’t realise what we had in store for him”. There were no divas on set, but “there was some issue about who should be in the front seat”. Of course, we are not surprised that Kelly is such a musical natural — she was part of an all-girl new-wave band in Melbourne in the early ’80s called Toxic Shock. 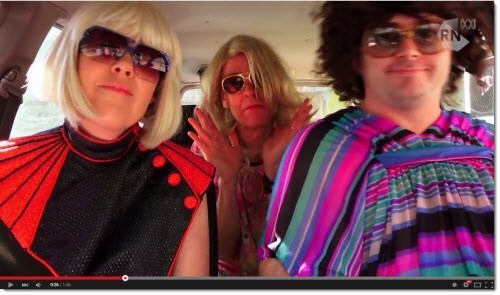 Deeply ashamed to admit I started singing along to that RN Breakfast video. Hell, I even knew all the words!

Don’t be ashamed Paddy, it’s a classic! Been in my head all day now!

@JasonWood_MP is clearly a Twitter twit and a worthless MP. Shouldn’t be surprised though.