Just how do you determine who the richest people in Australia are? 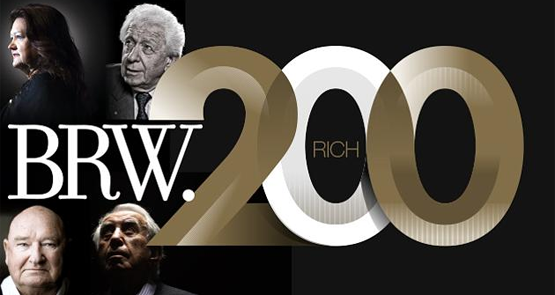 The BRW Rich List, out today, is a journalistic institution without peer in the Australian media. A three-month effort involving six researchers and numerous journalists, it charts the fortunes of around 250 of Australia’s wealthiest, to come up with a list of the 200 richest. At its height, it sold 10 times as many editions as the average issue of BRW, despite frequently selling at a higher price on news stands. At 220 pages, around 30% of which were ads, the revenues it would bring in would more than justify the investment.

This year’s edition, the second in the new format, is far more extensive than the last. While still significantly smaller in size, it looks more like the list used to look, with in-depth interviews, long features and analysis of the changing content and character of the list. That’s despite a largely new editorial team in charge. Last year was Rich List editor Andrew Heathcote’s last doing the list — he was offered a job by Bloomberg to do the company’s European list, after five years running the BRW list. And Tom Brentnall — BRW’s long-standing flagship editor, who had seen through 30 years of Rich Lists, starting with the first — has taken redundancy.

Heading up the Rich List now is John Stensholt, who returns to a role he last held from 2007 to 2010. As well as being Rich Lists editor, he also writes on the business of sport for the Fin.

BRW Rich List alumni were praising the list this morning, telling Crikey that Stensholt has done a fantastic job with the features (though few weren’t lamenting the smaller size of the list compared to the glory days).

Understandably, the exact specifics of how Fairfax comes up with the Rich List aren’t spelt out in the edition. The millionaires BRW track are kept at arm’s length throughout the process of determining their wealth. BRW’s researchers are wary of people becoming aware of their methods and taking further steps to hide their wealth, as many millionaires are keen to do. But so many people have worked at BRW over the years that one can find out quite a bit about the process behind the Rich List.

Every year, Fairfax hires six to eight researchers, starting in January, to work on the list. These researchers are not journalists — in fact, journos are actively weeded out, with BRW‘s editors instead preferring fresh graduates from courses like commerce, accounting, finance or economics. After a brief training period, each of these researchers are then given, on average, one Rich List file a day to update.

Given the high threshold to qualify (this year it’s $286 million) and the lengthening lifespans of those at the top, the list is very stable. Few researchers are thus working entirely from scratch — their role is to instead update the numbers. There’s a set process to figuring out how much someone is worth, though, in some asset categories, a certain amount of “black magic” is applied. Every file is split into five categories: public assets, private companies, property, cash, and other.

Private company holdings are more complex. Often holdings in such companies are held in the names of family members, so these will be included in the final figure. If a private company is big enough, its financial reports will be available through ASIC after a lag period. Based on the earnings for the most recent financial year, researchers can run valuations on these companies based on comparable sale values and valuations for similar companies. This will vary depending on the industry, and editors will make judgements based on their knowledge and experience of the sector. Some sectors are more difficult than others — farms, for example, are notoriously hard to value.

Property is more straightforward. Title searches allow researchers to figure out how many properties the Rich Lister owns. Agents can easily give estimations on property values if they haven’t recently been sold.

An estimate is also made of how much cash a millionaire or billionaire holds. This can include things like dividends, recent sales of assets, wages and the like. It’s difficult if not impossible to tell how much debt a Rich Lister holds, and it’s often ignored by the researchers. Failing to account for debt is the reason Nathan Tinkler, for example, soared so high in the ranking before crashing violently down to earth — it wasn’t clear from the Rich List that much of his wealth was threatened by mounting debts.

“Dick Smith, finding out BRW was considering him for the list, called up and demanded to know how much money he needed to give away to get off it.”

The final category is a catch-all for everything else — yachts, planes, art, etc. This is loose change most of the time, but worth keeping track of somewhere.

The researchers come up with 250 or so files, which are then split up among the researchers and journalists to write up. Those who make the list are eventually contacted and told the estimation BRW has come up with. Some call up to complain, while others send through their insurable asset statements. Attitudes towards being on the Rich List vary wildly, and some millionaires have historically gone to great lengths to stay off it. Dick Smith, finding out BRW was considering him for the list, called up and demanded to know how much money he needed to give away to get off it. He was told, subsequently donated the requisite amount, and avoided the list.

Of course, not everyone who should be on the list is — a point of pride in some circles.”If you’re smart, it is possible to stay off it,” one insider with a hand in compiling the list conceded to Crikey. “But it means you can’t enjoy your wealth. If you don’t go to social events, if you don’t buy expensive property, if you don’t donate to political parties or participate in politics, and if you never list [your company on the sharemarket], then sure, you can stay off the list.”

Given all the “black magic” and guesstimation involved in putting it together, how accurate is the list? “Reasonably accurate” was how another insider put it, saying BRW aims for a minimum rather than maximum valuation.

Over the years, the presentation of the list has changed. It wasn’t uncommon for early editions to be illustrated with pictures of Rolls-Royces with women in stockings draped over them. Today the list is more demurely presented — corporate power is still celebrated, but through finely cut suits rather than overwhelming extravagance. The current iteration of the list in the Wealth issue of The Australian Financial Review Magazine is something of a throwback to earlier times, given today’s magazine also includes high-end fashion spreads and a feature on rental properties in Palm Springs.

There’s no point denying the way the list is presented can be “soft”. The most damning things about how people acquired their wealth aren’t rehashed every year. BRW and the Financial Review are, after all, read more by people who aspire to great wealth than by those who deplore it.

Nonetheless, everyone Crikey spoke to had enduring affection for the list and what it set out to do. One person pointed out that the list was something Australia should be proud of — so many of the names on it are migrants, often from eastern Europe, though more recently from Asia — who came to Australia with nothing and worked over a lifetime to build up their fortunes. Some of them have done it more than once — Len Ainsworth, for example, lost control of his Aristocrat gaming empire when he handed it to his children, anticipating he’d die of cancer. It turns out he was misdiagnosed, so he set about founding a new company — Ainsworth Gaming Technology — which has him on the list once more.

“The Rich List shows that Australia did and does have a really deep business knowledge and experience. There are folks here who can make billions and millions of dollars — who are real wealth creators. It gave us deep insight into who those people were, and how they made their money, and works to inspire a younger generation to aspire to massive wealth creation. I think those are reasonably significant contributions,” a former BRW journalist said.

“Whatever you think of the massive amounts of money they have, they create hundreds and thousands of jobs.”

Several others pointed out that story of the Rich List is the story of the Australian economy, presented vividly, in the rise and fall of names and industries. Without the Rich List, many of Australia’s most powerful people would slip under the radar, unexamined and unscrutinised despite their enormous power. “People who say it’s glorifying wealth are missing an opportunity to use the information there,” another former Rich List journalist said. “It’s an important social document, and it should be used more to argue for more equity.”

In recent years, the Rich List has charted Australia’s property boom, its fluctuating resource prices, the rise of local tech titans, the emergence of Asian-born Australian property and finance magnates, and the continuing and persistent lack of women who control vast wealth. Everyone Crikey spoke to was adamant about the value of the list and viewed it as a crown jewel that mustn’t be allowed to deteriorate as Fairfax cuts costs. Today’s edition shows that while the list might not be exactly what it was in the past, the tradition is still going strong.

I used to work in a wealth management dept for a major bank. There are lots of very wealthy people who stay under the radar and don’t make the list. Not top 10 but certainly top 100.

“Whatever you think of the massive amounts of money they have, they create hundreds and thousands of jobs.”

It’s important that they continue to justify their exorbitant wealth and the disparity of incomes in Australia through whatever straws of rationalisation they can grasp.

Sure, some of them are genuine wealth creators, but the vast bulk were handed their wealth through inheritance, and without exception none of them suggests that luck and good timing were as instrumental in their wealth creation as any great skill or hard work.

It’s for people who believe that wealth is a measure of something of the worth of an individual. I’m not one of those people.

How would the names on the rich list compare in order of rank if there was a parallel list of names for those paying the most tax? Would any rich listers make it onto the tax list?