If FIFA wanted to avoid trouble, it should have gone into banking

The US prosecution of FIFA is extraordinary hypocrisy from a country that treats systemic and constant criminality by the world's biggest banks as the financial equivalent of a parking offence, Glenn Dyer and Bernard Keane write. 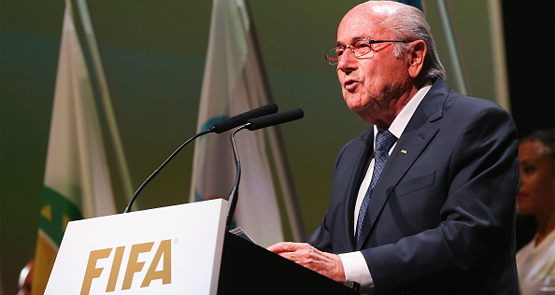 Few inside or outside soccer aren’t cheering the sight of officials of one of the world’s most corrupt institutions, FIFA, being arrested. But what an extraordinary display of hypocrisy and arrogance from the United States the pursuit of FIFA is.

The US prosecution illustrates the extraordinary capacity of the US government to, in effect, achieve extraterritorial application of its laws. If you do something that doesn’t break any laws here but does in the US, and if you have any involvement in the US (bank accounts, credit card payments, etc), the American government will find a way to get you if it wants to.

The Russians immediately complained about the arrests, and however self-interested they are, and however kleptocratic the Putin regime is, they have a point about the extraterritorial nature of what’s happening here. But worse is the hypocrisy. American authorities find it easy to fine BHP US$25 million for alleged corruption in inviting non-Americans to the 2008 Beijing Olympics, can have a British man arrested for nonsense charges over the 2010 Wall Street Flash Crash, they can spend years trying to extradite a British hacker who broke into the Pentagon’s poorly secured system over a decade ago and didn’t steal anything — but they’ve yet to put any banker in jail over the financial crisis, or interest-rate or currency rigging, or funding drug cartels and terrorism.

If FIFA president Sepp Blatter and his crooked cronies wanted to avoid being targeted by the Americans, they should have acquired a banking licence. Once you’re a big bank, you’re allowed to get away with pretty much anything and negotiate a wrist-slap fine if you get caught. Even if you admit to criminal conduct, the US Securities and  Exchange Commission will then automatically issue you a waiver that allows you to go on being a bank … over and over again, no matter how often you’re caught. Even an SEC commissioner dissented from the commission’s decision to issue such waivers after the most recent round of wrist-slaps. Commissioner Kara M. Stein ended her dissent with this:

“There are compelling reasons to reject these requests to waive the automatic disqualifications required by statute or rule. Chief among them, however, is the recidivism of these institutions. For example, in the face of the FX criminal action, a majority of the Commission has determined to grant Citigroup yet another WKSI waiver, its fourth since 2006. It is worth noting that Citigroup was automatically disqualified from WKSI [well-known seasoned issuer, a key requirement for big banks] status between 2010 and 2013 for unrelated misconduct, meaning that it has effectively now triggered WKSI disqualifications five times in roughly nine years. Further, through this latest round of Orders, the Commission has granted:

Now, Stein’s dissent was in relation to exchange rate manipulation. That comes after the Department of Justice’s actions against UBS, Barclays, and RBSG for another matter — their collusive manipulation of the London Interbank Offered Rate (LIBOR), a benchmark used in financial products and transactions around the world. The manipulation of LIBOR was flagrant and “impact[ed] financial products the world over, and erode[d] the integrity of the financial markets”. As part of the settlements in the LIBOR matters, UBS, Barclays, and RBSG each entered into (yet more) agreements with the Department of Justice in which they undertook not to commit additional crimes during the term of the agreements.

The US waivers have allowed these banks to remain in business, not only in the US, but around the world, including here in Australia, running investments for Australian individuals and super funds, governments and companies, managing money and arranging loans. And yet they are all criminals and recidivists under US law.

There’s a further domestic US hypocrisy involved here. In California, for example, ordinary folk face a three-strikes-and-automatic-jail criminal system, which actively discriminates against poor African-Americans, but also poor whites (although the latter have a much lower chance of being arbitrarily shot by police). But not bankers, whose theft has an additional six or nine zeroes on the end.

The scale of the criminal conduct by these banks runs to hundreds of billions, dwarfing the corruption of FIFA. And, frankly, it doesn’t matter a great deal if soccer is corrupt. But it matters a very great deal that the institutions at the heart of the global financial system are systematically, constantly, criminal in their conduct. Until we see big bank executives being arrested overseas at the behest of the Americans, their pious words about fighting corruption are crass hypocrisy.

And then there’s Formula 1 where a German court found Bernie Ecclestone paid a bribe of $44m to a banker. The banker got jail but Bernie bought his way out by paying $100m to have the case dismissed. Small change for Bernie but he guessed right: the German justice system is the best that money can buy.
There’s also the matter of Bernie’s good friend, Ron Walker, who negotiated on behalf of the Victorian government to get the grand prix. Ron also helped his friend sell a tranche of F1 and was rewarded by a ‘success fee’ of $100m, paid by the intermediary company that moved the tranche on. The Victorian government has never mentioned this one as the event has bipartisan support.
FIFA is small change, a million here, a million there.
Bernie learned from the banks: too big to fail, too rich to go to jail.

What a surprise to find Crikey & Putin on a Unity Ticket — oooops, of course not.