It's unlikely the Chinese will buy a major stake in Andrew Forrest's Fortescue Metals Group, but that's not to say they won't enter into the iron ore fray to FMG's advantage ... 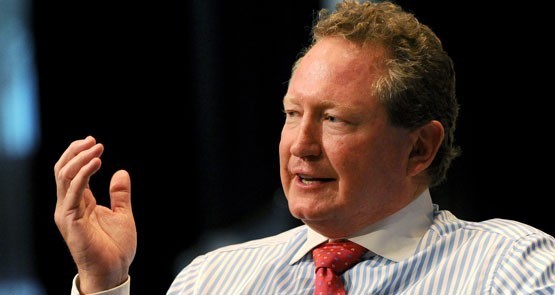 There’s been an extraordinary amount of unnecessary commentary in the past week about what may happen if a Chinese company wants to take a major stake in Fortescue Metals Group, somehow gaining control.

Relax folks, they ain’t even going to try. However, that the Chinese will come to the rescue of FMG and its major shareholder Andrew Forrest is hardly a surprise. It’s a scenario with which Crikey readers are familiar, as we predicted it in these pages in April.

And the Chinese have form: they rescued FMG in 2009 when iron ore prices plunged, and Hunan Valin Iron and Steel bought a stake of about 16% to shore up the company.

Here they go again, and the logic is simple: the Chinese are not remotely interested in rocking the boat. All they want (and are determined to make sure of) is the survival of the world’s fourth-largest iron ore miner. They would be utterly aghast at a return to the old days (well, in 2008, anyway) when they perceived that Rio Tinto, BHP Billiton and Vale were oligopolistic price-setters. Though they weren’t really. They just hadn’t picked Chinese demand; they belatedly plowed money into new mines as smaller rivals, led by FMG, sprung up around them. The Chinese now face an iron ore industry structure that they like, one with excess supply and lower prices. And they will pay to keep it that way.

When provincial steelmaker Hunan Valin bought into FMG, the company deliberately kept Baosteel and other Beijing-controlled mills away from its share register.

FMG also rebuffed big Chinese mills in 2006, when it was initially capitalising the company, preferring US bondholders to Chinese equity.

But now FMG is well established, supplying 160 million tonnes into the Chinese market, the game has changed. It needs a white knight with billions of dollars, and that will only come with one of the big players.

The latest mooted Chinese rescue of FMG comes off the back of FMG chairman and major shareholder Andrew Forrest shaking plenty of trees in China in recent months. Crikey hears that Forrest initially went to China to push his swelling cattle business in March but changed tack as the iron price tanked. He was rebuffed by Chinese banks for long-dated loans, but they suggested that he talk to their customers, the steel mills and Chinese miners. Voila.

But the likelihood of a Chinese state-run company — major steelmaker Baosteel (yes, we tipped that company, too) and conglomerate CITIC are the two that have been mentioned — taking anything but a minority stake in FMG head stock, or Forrest giving away control, are so remote it would be a waste of time even contemplating that scenario.

The apparent move to help FMG restructure its balance sheet to remove debt could take a number forms; the two most likely involve investments in assets, rather than the company’s head stock. One option is to buy shares in FMG’s original mines at Christmas Creek, shoring up the group’s balance sheet and securing supply and possibly marketing rights. The other option is to take a larger stake in the “Iron Bridge” joint venture between FMG, Baosteel and Taiwanese company Formosa. The Iron Bridge site in the Pilbara has deposits of magnetite, with relatively low iron content but also less-polluting iron ore that needs processing to be used in mills, unlike traditional Pilbara hematite. It’s the same type of iron that China’s high-cost mines dig up. The development of Iron Bridge would allow China to take these mines out of production and still keep supply levels up — and the price down.

CITIC, the other company that reports say has an interest in FMG has been in its own world of pain dealing with the $10 billion-plus Sino Iron project — the dummy sold to them by Clive Palmer. While CITIC would be keen to buy in at the right price to average down its iron ore cost, it has new and much cannier management, who will only deal at the right price, or perhaps on Beijing’s signal.

Is there anything significantly new in today’s ‘article’?
There isn’t. which might explain why it hasn’t aroused much excitement.
At least this suggests I shan’t receive the customary Crikey Censorship delaying ‘moderation’.