Gerbil-watch. Who says Senate estimates are boring? Today, a plainly grumpy Nationals Senator Bridget McKenzie demanded to know of Australian Communications and Media Authority chairman Chris Chapman why ACMA hadn’t begun investigating “Vile” Kyle Sandilands calling Barnaby “war on terriers” Joyce a “gerbil of a thing”, among other terms of abuse, in relation to an interview on the Depp Dogs Derp Drama a couple of weeks ago. McKenzie is apparently unaware that the law normally requires that ACMA only investigates a complaint once the broadcaster has dealt with it, or failed to deal with it, a system of “co-regulation” long upheld by the Coalition. McKenzie demanded to know what Chapman’s understanding of the term “gerbil” was. “I haven’t turned my mind to it,” Chapman replied, then said, in response to a follow-up question, that he didn’t know. The Collins dictionary defines a gerbil as “any burrowing rodent of the subfamily Gerbillinae, inhabiting hot dry regions of Asia and Africa and having soft pale fur”. We at Crikey are unaware of any other meaning or implication of the term.

Show me the money. It’s now been two months since the NSW state election, and many workers who handed out how-to-vote cards for the controversial No Land Tax Party have received payslips from convener Peter Jones, but there’s still no sign of payment. Around 300 people were promised payment for handing out how-to-votes for the micro-party after answering advertising on a website with the domain name electionwork.com.au. Many of them didn’t realise they were signing up for a political party, thinking they would be working for the electoral commission. Workers from across the state have banded together to try to get paid; the party is believed to owe each worker about $300, or more than $1 million in total. Last week, they received an email from Jones blaming the major parties and the workers themselves for the lack of money:

“I have not previously shared with you the underlying cause of the problems and delays, because they are OUR problems and not yours. They should not have affected you in any way – but of course they have. The election campaigns of political parties in NSW are almost entirely paid for by taxpayers through a system called public funding. The major parties receive tens of millions of dollars each in public funding for each election. In October 2014, the Liberal Government rigged the public funding rules to increase their own funding – and reduce every other party’s entitlement. Even with the rigged rules, the No Land Tax Campaign should have received approx. $1 million in public funding. However, the Liberal Party weren’t happy to play even by their own rigged rules. They (and their supporters) embarked on a deliberate and illegal campaign to discourage our workers from turning up. As a result, only approx. half of the people we hired turned up on the day – and many who turned up left early. This in turn affected our vote – and our entitlement to any public funding (under the rigged rules). If everyone had turned up (indeed, if only a few more of you had turned up) our vote would have been sufficient to entitle the No Land Tax Campaign to public funding (under the rigged rules) — and you would have been paid by now. We were prudent and conservative in our calculations regarding our public funding entitlements. We did not (and nor could we be reasonably expected to) foresee the illegal campaign that would be waged against us by the Liberal Party and their supporters. We will pursuing these matters through the courts – both the Liberal Party’s illegal conduct AND the rigged public funding rules.”

Jones also suggested that workers take up their concerns with the Fair Work Ombudsman, even providing the contact phone number. However, the Fair Work Ombudsman has contacted workers and told them that the issue isn’t covered by the FWO, but the Department of Employment. The email, seen by Crikey, told workers that if they weren’t paid they should consider making a small claims action in court. Ms Tips doesn’t hold much hope they’ll see any money.

Ruddock throws shade. The best insults are ones with very few words, and father of the house Philip Ruddock nailed it on Twitter yesterday, replying to this barb from Greens Senator Sarah Hanson-Young:

Watts swaps sides. Ms Tips is usually a fan of Labor member for Gellibrand Tim Watts, but today he has made an announcement that almost completely undid all his good work. Watts announced that he has decided to change his football team from the Brisbane Lions (Watts is from the Sunshine state originally and grew up supporting the Bears) to the Western Bulldogs. Changing teams is the cardinal sin of being a sports fan, but Watts has made an (almost) convincing argument on the Dogs’ website today:

“I still feel ashamed about it. I’m embarrassed to think that I could disappoint Jonathan Brown or Michael Voss. But the reality of it is that my heart lies elsewhere now. As the Bulldog’s captain, Robert Murphy writes on the first page of his book, Murphy’s Law, ‘Football is tribal’. I might not be a Son of the West by birth, but like the thousands of migrants who’ve come to Melbourne’s West over the past 50 years, the Bulldogs are my tribe now.”

Fairfax journos brace for more cuts. Fairfax metro publisher Sean Aylmer was in Melbourne earlier this week to talk to The Age’s house committee. Coming so soon after the prospect of further redundancies wasn’t exactly denied by Fairfax PR last week, it’s being treated ominously by journos at Media House.

Speaking of redundancies, senior Fairfax economics scribe Ross Gittins’ new book came out yesterday, and he spends quite a bit of time in it talking about the ideal size for Fairfax. He views further redundancies as inevitable. “When you’re a stock-exchange-listed public company, expected to earn an adequate return on the shareholders’ capital invested in the business, it follows as a matter of arithmetic that your revenue must exceed your costs and, should revenue fall sharply, your costs must fall just as sharply,” he writes. “As an accountant turned economic writer, I’ve never had a quibble with this logic.”

Not what you’re looking for. How do you fight a political battle when you’ve got multiple opponents and not a whole lot of policies to talk about? By winning at gimmicks. Republican presidential hopeful Rick Santorum has not had a great history with internet memes, but he’s trying to turn that around with the 404 error page on his website. Including a picture of Hillary Clinton holding her Blackberry, it says “we’re sorry, but we couldn’t find that page. But we do have this search box. You know, ‘for convenience.'” It’s a dig at Clinton’s comments about using a private email server while she was secretary of state. And for reference, the page we searched for to get the error was www.ricksantorum.com/policies. 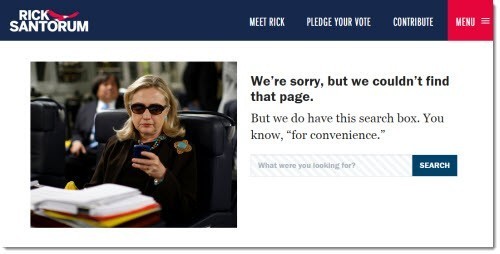 I think I also heard somewhere that Sandilands had called Barnaby a pretentious wanker. I have little regard for the Minister for Agriculture (Gawd help us)but it must be said there was certainly a pretentious wanker present in the interview. It just wasn’t who Kyle thought it was. He forgot to look in the mirror that day I guess.

“The Rodent” was taken, but on that level, I suspect that Barnaby would think he is in good company being referred to one way or another as a rodent.