The tampon tax is a convenient distraction. Period. 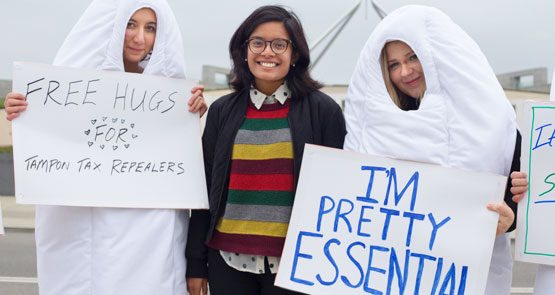 As far as student protest chants go, “No tax on tampons! Or blood will be spilt!” was quite funny, and so it stuck around for a semester or two of dissent as we women raged against this impost on the female body. Here was hard evidence that men and the institutions they had built around themselves saw us as the dark excess the dawn of reason had left behind. It might have been a small tax, but it was one that bureaucratised the hatred for our sex so utterly, it demanded full illumination.

It also demanded an afternoon of fact-checking, probably. There was no tax applied to applicators, sanitary pads or any of the highly profitable products women must purchase about once a month for 40 years. Actually, the Deputy Commissioner of Taxation had released a statement to press a few years before I began protesting to unequivocally declare that there was not now, nor had there ever been, a tax on such items. It didn’t do much good, and the protest virus, likely caught from our UK sisters — who had long objected to the value-added tax on sanitary items with a series of funny slogans — was incurable.

When far-ranging GST reforms were passed into law under Howard, and tax was, for the first time, applied to these items, rage was, understandably, inflamed once more. But by then, there were so many products and services subject to the tax that warranted exemption — notably, the charges that applied to long-term residents of caravan parks — that roll-back efforts by protesters and the opposition could not afford to focus solely on the feminine hygiene shelf.

The GST and its subsequent “tampon tax” hasn’t changed since its implementation in 2000, and for all that it might have done to simplify revenues, it continues to disproportionately collect from low-income earners. If there’s a problem with the GST, it’s not that it afflicts menstruating women unfairly. It’s that it afflicts low-income earners, an increasingly over-represented national group in which women happen to be over-represented.

Also unchanged is the seductive appeal of “don’t tax our periods” protest, which has been reignited this week. After the matter re-emerged on Q&A last Monday, an online petition quickly followed. It has accrued nearly 100,000 signatures, a good deal of front-page attention and social media endorsement from the ALP.

It’s easy to understand the lure of such a campaign, not only to emerging feminists but to the opposition. It’s a grassroots grumble whose putatively practical nature points not only to government detachment — “These guys are out of touch with real lives in supermarkets!” — but to the personal sexism of Abbott, a perception the ALP has been eager to enlarge since the poll spikes that followed Gillard’s “misogyny” speech.

For that part of the electorate generally ignorant of the terms of the GST, which should be, depending on your perspective, universally applied, better compensated or scrapped, this is a naive moment of political glory. For the ALP, it is a cynical moment of political glory. For an excise that will save a woman of even flow around $400 across her reproductive lifetime, it’s a lot of fuss. Most particularly when it implicitly endorses the terms of the GST. Protest effectively says: the GST is fine and it is inevitable. I just don’t want to endure it during my crimson tide. This is now, as it was In My Day, an overtly apolitical protest.

In the weeks leading up to the ALP’s national conference billed as an opportunity to “explore the power of ideas”, it might be circumspect for the party to begin exploring ideas rather than exhuming old, apolitical reflexes. Along with the peculiar decision to reboot same-sex marriage — again, a protest that endorses an institution and strives not to reform it — this moment of easy, crowd-pleasing rage seems to be about as detached from the real needs of the electorate as, say, a politician who doesn’t know the price of milk.

Young women must be forgiven for their simple reading of “tampon tax” as codified misogyny. Old politicians, however, have business elsewhere. The showboating uselessness of this non-battle is to the ALP as the absurd “halal food is funding terrorism” is to the claims of Cory Bernardi.

If the ALP proposes just changes to the GST or to its compensation, we can take more interest. Just as if Bernardi starts getting as angry about claims like “gluten free!” or “all natural!” on food packaging.

On the road to somewhere

Pandemic? Nothing that a good dose of reform wouldn’t fix. No, really

An undeniably catchy “protest” but a flawed one as well. The GST was a mistake full stop. It lands on poor people more than rich people, and is a major component of our current revenue problem now. A GST is great for Govt in boom times, but a millstone in GFC events. For an extended period (yes pun intended) in our household there were four users of tampons for which I was paying. I no more cared about the GST on those than the GST on the dog food….and woe betide anyone who suggested that the dog was unnecessary.

@MikeB Obviously, I agree. Less obviously, I support the claim that dogs are an essential health item.

Since I am considerably older than Ms Razer, and have had the benefit of being on the ‘inside’ of some debates as a one-time senior public servant, I am wondering when we will once again hear of the value of sea sponges as an alternative to tampons. I have ineradicable memories of late nights at APH for Senate Estimates, forced to defend, to the sniggers of (male) colleagues, and the discomfort of (male) Senators, probing questions by (then Opposition) Senator Kay Patterson about a student newsletter funded under some community health program which was promoting the superior morality and ecological qualities of sea sponges as an alternative to tampons. I am surprised to realise that the current students running this campaign ( Greens?) have not yet perceived that sea sponges ought also be GST free ( or not).

“DON’T TAX MY PERIOD!” Is the stuff guerrilla journalists’ wet dreams are made of. If feminism were a political party (instead of nothing) this would be the slogan. So much fodder for outraged protesters, writers, and concerned bons vivants. It’s so monumentally scandalous that only the Illumanati could be behind it. Like if it turned out September 11 was a sexist attack. All this proves is that the next time our government wants to start a war, introduce a tax, or fire a looney tunes canon at refugees (formerly known as ‘the boats’) all they have to is have Abbott do something like offer everyone on the front bench a ham and cheese sandwich except for Julie Bishop. She’ll try and say there was just a simple misunderstanding with the caterers but we’ll know better. We’ll know there is something far more insidious going on and we’ll have the nauseating open dialogue in the form ceaseless distracting fluff pieces and inane QandA questions to prove it.

The years may roll on but I guess that for some who made immature ‘protests’ in their youth, it’s still far easier to trivialise important issues?