Soccer doesn't rate for SBS. Plus other media tidbits of the day.

Soccer doesn’t pay for SBS. A move to SBS One didn’t do much to raise ratings for the A-League, SBS managing director Michael Ebeid told Senate estimates yesterday, in the strongest indication yet that SBS might on-sell some of its football rights.

“We put it [A-League] on SBS One in the hope it would get a good uplift, that uplift didn’t happen,” Ebeid said. “It has meant that we have lost more on the A-League in this financial year than we did last financial year, its hurt us both in terms of audience share and ratings.”

SBS director of content Helen Kellie added that the A-League had actually served to lower ratings on SBS One. “The A-League was significantly lower than our average ratings,” she said. “It significantly brought down our Friday night performance on One, and that’s something were going to have to consider.”

The broadcaster wouldn’t be drawn on specifics about whether plans to on-sell the A-League were in progress, saying discussions were confidential. Crikey has reported that the possibility of on-selling the rights is widely discussed by management at SBS, even openly with staff. — Myriam Robin

Go west? Speaking of the multicultural broadcaster, moving SBS out west from the Sydney north shore suburb of Artarmon would be “a massive waste of taxpayers’ money”, argued the broadcaster’s managing director Michael Ebeid on Wednesday. Appearing at budget estimates, Ebeid responded to calls from New South Wales Premier Mike Baird and the mayors of Liverpool and Blacktown to move SBS to the multicultural west. Earlier this week, Baird said he was “strongly” supportive of relocating SBS: “I think it’s a great idea; indeed, it’s logical,” he argued.

But the SBS boss told the Environment and Communications Committee relocating would be “detrimental” to the broadcaster. “I think it would be a massive waste of taxpayers’ money to spend tens of millions of dollars refurbishing, re-fitting out our TV and radio studio complex,” he said. Moving would take SBS further away from many of the organisations with which it does business, Ebeid argued.

“We don’t have the money to do any of that whatsoever. I would also ask the question: for what purpose would the organisation move out to any other location when a lot of our partners, suppliers, other media companies we work with are all in our vicinity? If we were to move to, for example, Liverpool, we would lose a lot of productivity and efficiency in terms of people going backwards and forwards, flying in and out, being further away from the airport, et cetera.

“I actually think it would be detrimental for the organisation. It’s not about where we’re located, we’re a national broadcaster that covers stories right around the country, and our workforce is incredibly diverse and live in all parts of Sydney.” — David Donaldson (read the rest at The Mandarin)

We pay MEAA rates for commercial content: Guardian. Earlier this week, The Guardian Australia asked Tracey Spicer to write a piece of branded content for ANZ that would appear on both The Guardian and ANZ’s website for 14 cents a word. The experienced journalist was not amused, and took to social media to register her displeasure, prompting something of a shitstorm at Guardian HQ as ANZ distanced itself from the low offer (the bank’s head of corporate comms said he wanted union rates for those doing commercial content — oh the irony).

The Guardian today issued a “clarification” on its low offer to Spicer, saying its content rates had been misapplied. The rate Spicer was offered is actually what the Guardian pays, on average, opinion contributors to Comment is Free. Perhaps whoever contacted Spicer wasn’t aware rates for commercial content across the industry are generally far, far higher.

In its clarification, The Guardian writes:

“Guardian Australia maintains fair standards for commercial content and pay rates are in line with or higher than current MEAA recommended levels.”

The MEAA rates are 90 cents a word, and to your correspondent’s knowledge publishers rarely pay that amount, even for commercial content. — Myriam Robin

Just don’t screw it up. In his column this morning, Andrew Bolt throws in the towel on gay marriage, saying it’s probably inevitable at this stage but he hopes the gay community can protect its sanctity as well as the straight community has. It follows another conservative commentator, Alan Jones, yesterday expressing his own support for gay marriage, though, it’s to be noted, Jones did it in far more whole-hearted terms.

In the Herald Sun, Bolt compares himself to Tony Abbott, who has a gay sister. Bolt’s own sister, Stephanie, has written for Crikey about her own support for gay marriage. In 2011 she wrote:

“Last Monday, my brother Andrew Bolt published a column presenting his views in opposition to same-sex marriage. I belatedly attempted to post a contribution to the lively blog debate. When it wasn’t published, I knew I didn’t want to leave it there — being a lesbian in a committed relationship I want to participate in the conversation happening across the country, tell my story and, in doing so, hopefully make even the smallest difference to the long-running campaign for marriage equality.”

Front page of the day. It’s hard to imagine a photo like this gracing the front page a decade ago … 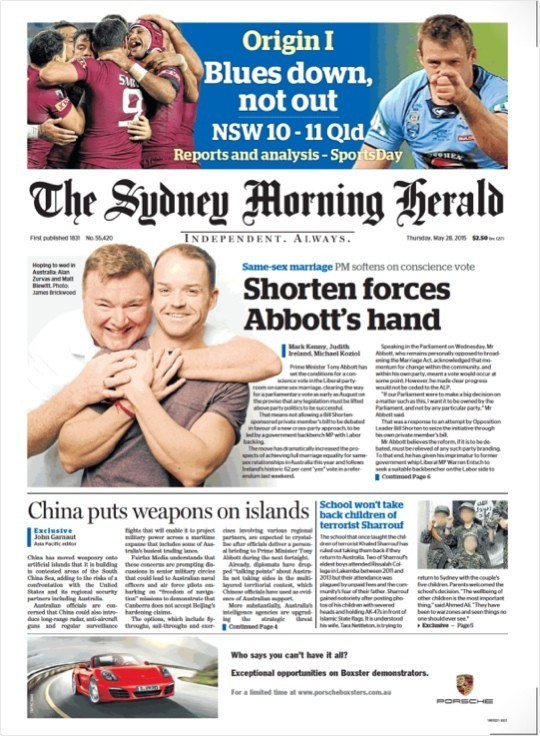