Tampons tax, same-sex marriage and national security were the topics of choice across media over the past week.

The focus swung somewhat away from the economic portfolios this week and towards what the Americans would call homeland security issues, with a side-serving of social issues. Treasurer Joe Hockey was still out and about spruiking his budget though, telling the ABC’s Q&A audience on Monday night he would look into removing the “tampon tax”, and defending it against NATSEM modelling that found the budget will hit those on lower incomes the hardest for the second year in a row.

Foreign Minister Julie Bishop was back into the top four after a few quiet weeks, following cabinet leaks that suggested Immigration Minister Peter Dutton — up seven places — and the PM were considering whether to allow the stripping of an Australian-born person of their citizenship, at the discretion of the Immigration Minister alone. Bishop was rumoured to be among six cabinet members who spoke against the proposal, including Attorney-General George Brandis, with the main objection being against a person rendered stateless without due process and potentially in violation of international law.

Victorian Premier Daniel Andrews made headlines for standing down Small Business Minister Adem Somyurek following allegations of workplace bullying, while Independent Senator Nick Xenophon continued his high ranking of last week speaking against the government’s planned changes to family tax benefits, the release of an audit that found Navy warships have taken $1 billion more in funding than planned, and for a conscience vote on same-sex marriage in parliament. 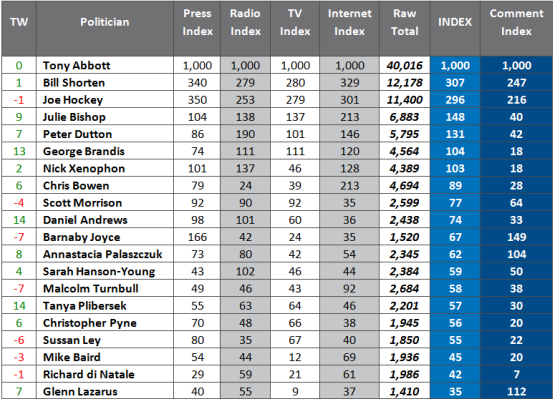 Greens Senator Sarah Hanson-Young put forward a private member’s bill to legalise same-sex marriage before parliament, with a vote scheduled for November 12. As usual though, nowhere close to the PM, who received international coverage for his plan to revoke citizenship of those who join the Islamic State.

I fear that Australia’s entry into the kitsch kaleidoscope of campness and woefully bad music that was the Eurovision Song Contest has coincided with it losing most of its fun. The songs are now almost all in English and generally standard soft pop/ dance FM radio fare. The Europeans have taken away our one chance every year to gently poke fun at them and feel culturally superior. Boo.