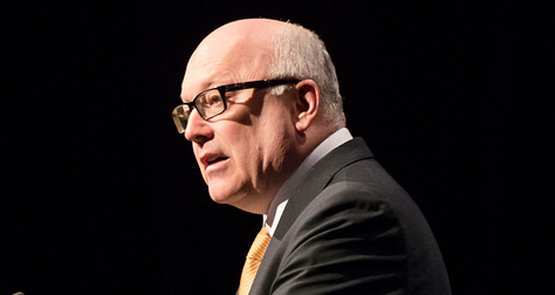 Politicians cannot instruct the Australia Council on its grant-making. It’s protected by legislation, giving it “arm’s-length” independence from government and political favours or prejudice towards individual applicants for funding.

But how would things be without that protection? The question is especially relevant as Arts Minister George Brandis takes $104.8 million in funds from the Australia Council and places them in his own ministry where he could, if he wishes, decide who is to receive funding. The Hansard transcripts from a recent estimates hearing in Canberra might provide some answers to this question.

On November 20, 2014,  the chief executive of the Australia Council, Tony Grybowski, appeared before the Senate Legal and Constitutional Affairs Legislation Committee for a perfectly routine estimates hearing into the Attorney-General’s portfolio.

Three of the five senators on this committee were lawyers, and one was a policeman. They were Brandis (Liberal) as Arts Minister, Penny Wright (Greens) a lawyer, Ian McDonald (committee chair, Liberal), and a solicitor, Barry O’Sullivan (Nationals), formerly a police officer. The fifth, Senator Jacinta Collins (Labor), formerly a union leader, made only one comment at the very end, commending the decision to close the hearing — whether from distaste or boredom, we cannot know. The assembled legal skills were applied with energy and tenacity to question Grybowski. The Hansard transcript for the entire hearing runs to 30 pages.

One of the topics covered in the hearing was on funding to the Australian Festival of Chamber Music (AFCM) in Townsville. McDonald’s electoral office is in Townsville, O’Sullivan’s in Toowoomba, and so both are regional. Brandis is from Brisbane.

AFCM had had a three-year funding commitment from the Australia Council for 2009-11 — something of an honour — but beginning 2014, AFCM was not approved for funding; its competitors were judged to be more deserving. That was what instigated the committee’s discussion in this part of the routine estimates hearing.

Challenged on the decision, Grybowski explained the peer process that selects among funding applicants. He noted that the council was giving AFCM a lot of assistance to maximise the possibility that its next funding application would be successful. (That’s interesting. Does the council now coach applicants for funding? Who is eligible for such assistance and who is not?)

Grybowski spoke from deep within the processes of the Australia Council at a time of major government-imposed re-organisation. To the uninitiated, much of what he said could have been somewhat impenetrable, even if they were interested. The committee members’ interest seemed confined to searching for fault with the council’s process.

THE AUSTRALIA COUNCIL (REGRETTABLY) IS AT ARM’S LENGTH FROM GOVERNMENT

The case was “prosecuted” mainly by the Townsville-based chair, Ian McDonald. Arts Minister Brandis was not there to examine his own department or authorities; indeed, he could himself be questioned.

At the committee hearing, Brandis said:

“… as a Queensland senator and as somebody who has taken a close interest in Townsville Chamber Music Festival having attended it twice now, including this year [2014], I have made my view very clear to the Australia Council that it is the government’s wish, and it is my wish as the minister, that that music festival continue to be supported.

Is this the government’s view because it is Brandis’ view, or did he take a vote? And what exactly is this Minister’s view of arm’s-length funding? (The wise people who set up the Australia Council gave it statutory independence in order to minimise political pressure on its selection of funding recipients.) His recent decision to shift $104.8 million out of the Australia Council to the Ministry for the Arts to establish a “National Programme for Excellence in the Arts” — where he could personally direct grant funds — might suggest his real opinion.

Since the Senator is willing to make the judgement that the AFCM is the principal chamber music festival in Australia, could he list the others he has attended?

The discussion had earlier revealed that the committee chair, although heading a committee overseeing the Australia Council’s activities, had little knowledge of some fundamentals …