Barking mad, or cat-astrophe? Small dogs all the rage

Small dogs are ousting larger dogs in the affections of Americans and, it seems likely, Australians too. One popular explanation is we’re living at higher densities but it’s likely there’s more to it. 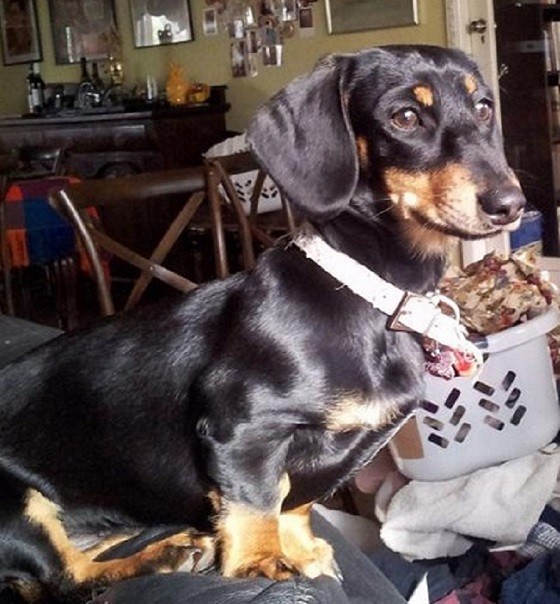 Who wouldn’t want to have a cat like this little cutie, who can also bark menacingly at sparrows? (source: one of the author’s hounds)

According to a report earlier this year in The Washington Post, tiny dogs are taking over the  United States. Back in 1999 Americans had a clear preference for both medium dogs and large dogs over small ones. But there’s been a big change:

“Now you might want to slow down here as you read this, because what comes next is a pretty astounding bit of information: Since 1999, the number of big dogs has fallen off by nearly one million pets, the number of medium-sized dogs has dipped by roughly half a million pets, and — wait for it — the small pet dog population has grown by almost 15 million pets.”

There are now more small dogs in the US (27.5 million) than there are medium dogs (19.7 million) or large dogs (24.5 million). While the total dog population grew strongly over the last 10 or so years, small breeds’ share of the canine population went from around 22% in 1999 to 38% in 2013; that’s a phenomenal increase in “market share” (see second exhibit).

I can’t find any comparable Australian figures, but the US pattern seems consistent with what I’ve noticed on visits to the Gracie Street Lost Dogs Home in the last year or two. There are few little dogs available for adoption but plenty of larger ones, especially ones that look like they’ve got a bit of staffie in them.

What makes this particularly interesting from my perspective is the Post’s writer puts the change down to “the national migration to urban areas” and the associated preference for smaller houses and apartments. He also suggests that the trend to delay offspring leads Americans to “enjoy the opportunity to care for an adorable mammal”.

I think there might be something in the “child substitute” hypothesis, but the contribution of the claimed shift to smaller housing in denser areas is disputed. It doesn’t seem to be happening on anywhere near a big enough scale to account for more than a small fraction of the change in the dog population.

The erosion of middle-class incomes might be another part of the explanation, as might the GFC since 2008. The ageing population could be in there too; older people find a smaller dog easier to control, cheaper to feed, less intimidating to grandchildren, and less of a threat to other people and, in particular, to their dogs.

Maybe another factor is more and more American dog lovers are pressed for time; a small dog means there’s less waste to pick up in the yard (and less to step in!). Some might imagine smaller dogs require less exercise too, although that depends to a large extent on breed (Jack Russells are full of energy; greyhounds are pretty relaxed).

Like a lot of other things, perhaps it’s as much a change in consumer fashion as anything else. I’m not sufficiently literate in popular culture to point to what might’ve kicked it off, but it seems quite plausible small dogs have simply become more fashionable than big dogs. Maybe some key celebrities have a thing for small dogs?

Whatever the reason for the rising popularity of smaller breeds, there are a lot more yappy dogs annoying the neighbours; that’s especially so if it turns out they’re also displacing cats. There’s also less pet food being eaten and so less greenhouse gas being emitted. 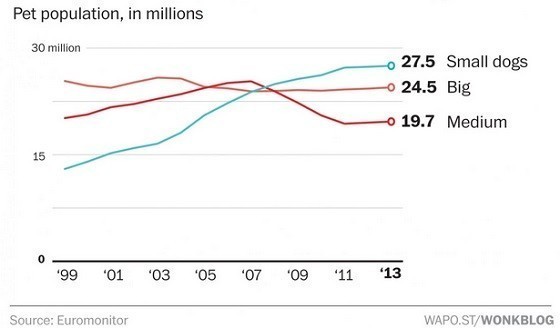