Independent. Sometimes. More than 250 Wollongong residents, including a who’s who of local politicians and community leaders, turned up to the city’s strip mall on Saturday to protest against cuts to local paper the Illawarra Mercury. It’s usual for any rally of that size — particularly one led by such prominent community members — to be reported in the Mercury, and the editor had slated it in for the next edition. But Crikey has been told by several sources that a verbal instruction came down from senior Fairfax community media editorial brass to not run the story. Mumbrella has a piece on the directive, which notes the union’s displeasure at the interference, and Fairfax’s lack of a response. Crikey also contacted those we were told were responsible for the directive seeking confirmation, but we didn’t get a response by deadline. One Mercury staff member noted that the paper’s been through three rounds of redundancies since 2012, and had always covered the community response in an even-handed manner. Barring journalists from reporting on a rally about the company isn’t the way things are normally done at Fairfax.

Loose lips sink ships. When will politicians learn to keep their leadership chats to private places? They haven’t yet, according to this tipster:

“Having faced Sunday Mail headlines of lackluster leadership polling, Queensland LNP Deputy Leader John-Paul Langbroek was overheard lamenting the results in Rockhampton airport. Having spent the day with proponents of a casino rejected by the former LNP government, Mr Langbroek was speculating on leadership options. Unsurprisingly JPL fancied himself a replacement of Lawrence Springborg on a joint ticket with little-known frontbencher Deb Frecklington. Safe to assume this would be a pre-emptive ticket against the popular [Tim] Mander/[John] McVeigh option.”

We put this tip to Langbroek’s media representative this morning to see if he really was planning a challenge, and were told: “A spokesperson for Mr Langbroek said we don’t comment on gossip and rumour. Mr Langbroek is very happy in his current role.”

Sound Alliance selling SameSame? A tipster says niche, youth-focused publisher Sound Alliance is in advanced, “exclusive” negotiations to sell gay and lesbian title SameSame to an unknown buyer. Sound Alliance also publishes music titles FasterLouder, inthemix and pop culture title Junkee. It’s the first time the publisher, to our understanding, has looked to sell a title, and follows a bit of a shakeup in the gay media sector (see Media Briefs today). SameSame is one of the younger breed of gay and lesbian titles, existing exclusively online where many of its predecessors relied on print (a reliance now, understandably, being scaled back). Ms Tips contacted Sound Alliance CEO Neil Ackland to ask about the tip, and was told the company had no comment. Guess we’ll wait and see what pans out.

Tough crowd for Lambie. A tipster tells us Senator Jacqui Lambie made an appearance at University High in the Melbourne suburb of Parkville on Friday and that, as usual, she didn’t hold back when giving her honest opinions. Our tipster said that Lambie told the gathered students that women shouldn’t wear hijabs, despite there being students in the audience who were wearing the head coverings. If you’ve ever thought Lambie might be wary of voicing her opinions to some audiences, we know now that she’s definitely not.

Parliament House Cryptoparty. Greens Senator Scott Ludlam has been making his way around the country hosting Cryptoparties, where attendees are trained in the ways of anonymising their online communication as a way to dilute the power of the government’s data retention laws. The parties are hosted by software development company ThoughtWorks, with experts in different areas carrying out a range of workshops. Now the concept is being brought to Parliament House, where members of the press gallery have been invited to learn about communicating securely and protecting their sources on Friday afternoon. It seems unorthodox for journalists to be learning this from a pollie, but these are the times we live in.

Is this thing on? Monday night on the ABC is a bit of a must-watch night for news junkies, but last night the news and current affairs were interrupted by transmission issues that plagued the ABC signal for about an hour. Ms Tips originally thought it was her own TV, but fortunately Twitter confirmed that we weren’t alone in watching blocks of colour and for one quick moment even Antiques Roadshow. It was even annoying ABC managing director Mark Scott, who promised he might be fixing it personally:

We’re not sure what Scott would do with said screwdriver, but it was a moment that made us miss ABC News Intern, who tweeted at the start of the month that he’s going on a hiatus (too much working for free, we think). We also asked the ABC this morning what happened and if the issue was fixed, and this is what we were told:

“ABC TV started experiencing technical problems affecting the broadcast of ABC News, Four Corners and Media Watch last night. The situation became worse affecting both ABC and ABC2 channels. After midnight network systems were taken offline for a reboot in order to fix the problem. We are currently investigating the cause. ABC TV apologises for any inconvenience.”

Chicken dance. We’re not sure why this happened, but we’re glad it did. Prime Minister Tony Abbott resorted to flapping yesterday in question time. It’s kind of mesmerising to watch: 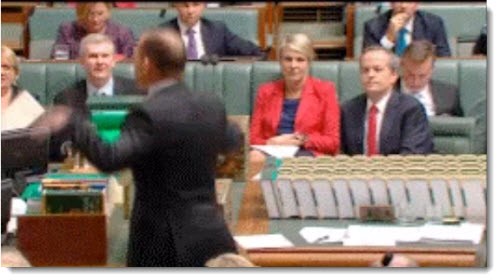