Is it faster to drive, or take the train?

Policymakers should look at these numbers. Journeys made by car in Sydney are much faster than journeys made by train; they’re a long way from being substitutes for each other. 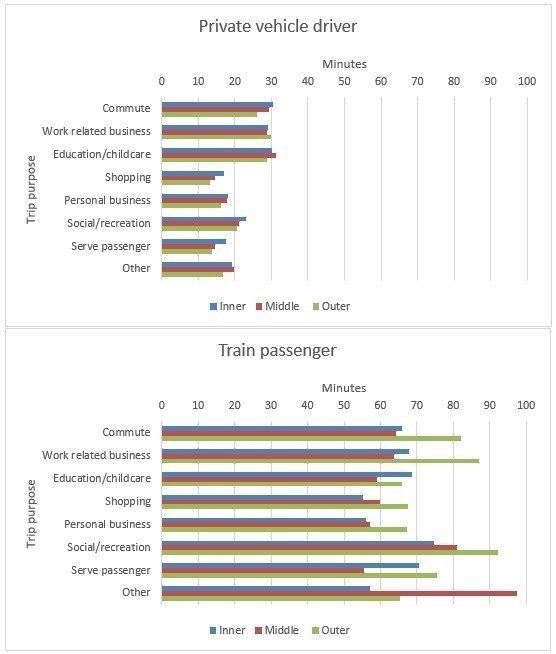 One of the perennial issues in urban transport policy is the duration of the journey to work. Time spent commuting by car is frequently said to be implicated in a range of social problems, from diabetes to family breakdown (e.g. see here, here, here, here, here and here)

So it’s worth taking a fresh look at just how much time we spend on commuting and other trip purposes. The exhibit shows the average duration of one-way commutes and other journeys in Sydney using data from the NSW Bureau of Transport Statistics (BTS) household survey.

Average journey times (in minutes) are presented separately for residents of inner-, middle- and outer-ring suburbs. The first panel presents the data for car drivers, and the second for train passengers.

Since the data is collected via a household survey, note that according to transport researcher David Levinson, Vierordt’s Law says “people are more likely to over-estimate short times and under-estimate long times”.

Sydney’s a good choice for comparing car travel with public transport and thinking about the implications for the future. It’s Australia’s most populous city; it’s got by far the highest population density; easily the highest mode share for public transport; and it has a stronger system of suburban centres on train lines than the other capitals.

There are some very interesting things going on in the exhibit, but the key ones are:

Train journeys take significantly longer on average than car journeys for a number of reasons:

The land use and infrastructure patterns underlying train trips and car trips are very different. Car journey times are shorter in part because there’s no waiting time, no stopping time and they mostly travel door-to-door. A more important factor though is that the great bulk of activities people want to get to have “decentralised” from the centre to the suburbs, along with population.

Car-oriented cities deal with traffic congestion in part by building more roads but mostly by keeping densities relatively low and accommodating growth at the periphery (i.e. growth centres). Local destinations are no longer within a manageable walk like they once were, but they’re now within a relatively quick drive (e.g. the average shopping trip by car in Sydney’s outer suburbs is 13 minutes).

The BTS data indicates that, other than for a small range of trips (e.g. commutes to the CBD), trains are a long way from being good substitutes for cars in Sydney. It also suggests a number of challenging questions, including:

I’ve focused on trains here to keep the discussion manageable, but note that the average duration of trips by bus is also significantly longer than it is by car. That holds for all purposes in all rings, according to the BTS data.

Although the differences are not as marked, the data shows a similar pattern with average trip distance (kilometres). The average length of trips by car in Sydney is appreciably shorter than it is by train in all rings and for all purposes (I’ll look at distance in detail another time).

The numbers in the exhibit are all averages for large areas, so there’ll be plenty of variation at the local level (e.g. some trips much faster, some much slower). The “big picture” takeaway though is that cars still offer a compelling proposition relative to trains, even in congested Sydney.

It’s deluded to think cars are on their way out. Policymakers need to stop ignoring the obvious and start thinking seriously about how to ration demand in congested locations; how to make cars cleaner, quieter and more fuel-efficient; how to make them safer for other street users; and how to make them more respectful of urban amenity.