Paid parking has caused a parking mini-crisis in Parliament House, but no one seems to have much clue what to do about it. 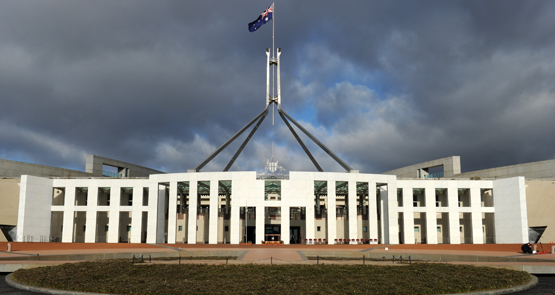 By the standards of the state capitals, it’s small-scale. But in a sleepy ville (or, as it will feel for the next couple of months, a cryogenically frozen ville) like Canberra, it’s significant: Parliament House has a parking problem.

For several months, since the introduction of paid parking in the public carpark at Parliament House, getting a parking spot in the Senate or House of Representatives carparks, where most people who work in the building park for free, has become ever more difficult. Weeks ago, if you didn’t arrive by around 8.50, you missed out on a spot and had to either go park in the public carpark, where you’d be hit for upwards of $20 to park for the whole day, or roam the streets of nearby suburbs like Red Hill looking for a spot, then hike over to the House. Getting a spot before they run out is increasingly becoming a blood sport.

Now it’s not uncommon for the carparks to be chockers well before 8.50, with long queues of cars to get into the Senate entrance — where press gallery types like your correspondent would typically park — forming before 8.30. People working in Parliament House who have to drop kids off at school, or who don’t start work til later in the day, now stand no chance of parking anywhere but the public carpark and facing thousands of dollars a year in parking costs. Or they can get the bus (provided by the ACT’s CRAPTION bus service), which doesn’t run especially often in peak hour and even more rarely during the day.

Yesterday the Department of Parliamentary Services, minus sacked secretary Carol Mills, fronted up to the Finance & Public Administration estimates hearing to discuss the issue, which has attracted concern from senators whose staff have struggled to get into the building on time.

Paid parking was introduced in the public carpark because paid parking has been progressively introduced throughout the “parliamentary triangle” — the area of Canberra south of the lake that houses Parliament, central agencies like Treasury and PM&C, the “national institutions” like the Gallery and Library, and a bunch of other departments besides. Increasingly, public servants who didn’t work in Parliament were parking in the free public carpark in Parliament House and walking to work. As DPS explained yesterday, it set the fees in Parliament House to address this: its parking charges encourage short-term visitors, like tourists, and discourage long stayers, such as working parents luckless enough to make it into their place of employment at 9am.

Some public servants sneakily avoided all this by using the special pass departments have for bureaucrats travelling up to see the minister, which gives access to the parliamentary carparks. But according to DPS, that’s now been stopped, and only people with photographic passes can get in. There are also, helpfully, some staff now posted at places like the entrance to the Senate carpark to check that people aren’t tailgating into the carpark, as apparently happened recently, DPS said, when a confused tourist tailgated someone into the Senate carpark.

That kind of defeats the purpose of the entire infrastructure put in over the years, at great expense, at these carpark entrances — there used to be a DPS staff member sitting in a box checking passes and raising a boom gate. Then they were replaced with a pass scanner and a boom gate, and the boom gate was later replaced with an actual, heavy-duty gate. That’s different to the boom gate installed recently at the public car park, which is so slow that huge queues form inside the public carpark if more than three people want to leave at once. DPS is “in discussions with the manufacturer” about that, and has people permanently at the ready to rush out and lift the boom gate up if they decide things are moving too slowly.

But despite conducting a “before and after” survey of traffic, DPS doesn’t actually know why carpark usage in the Reps and Senate carparks has surged since paid parking was introduced. It has a list of every single vehicle that has entered and the pass on which the driver entered, but DPS haven’t made much effort to check which passholders are suddenly piling into the Senate and Reps carparks. But they have put together a “parking plan”, they insist, that will go to the Speaker and the President before too long. The only problem is, the “parking plan” can’t deal with the fact that there are about 5000 passholders entitled to get into those carparks and only 1000-odd carparks.

There is, of course, only one real solution: having advocated infrastructure pricing for everyone else, your correspondent must accept the need for consistency and propose that a price signal be introduced, even though that is likely to incite actual violence from some of his press gallery colleagues. Either that, or there’s a lot of open space on top of Parliament House itself that could probably fit a few hundred cars. Wouldn’t be too flash for the grass, though.

Senate committee slams parliamentary department over use of CCTV

Maybe time for the Press gallery to get their hands on a copy of The High Price of Free Parking by Donald Shoup. Governments/business know not to give food away for free as they understand according to microeconomic theory zero price=infinite demand. Somehow parking is considered “special”. Read more at http://www.sensibletransport.org.au/project/high-cost-free-parking-seminar

Welcome to the world of workers in higher education and health for years.

Now we learn there is an Entrance Fee to visit Parliament House. No thought about interested punters visiting Canberra from say Mukinbudin WA being faced with a $30 penalty to park in the public car park and enjoy Question Time. Yes parking on the roof grass has attraction. Then we forget cars take up real estate but architects find this fact a challenge.

…and on the shopping centre line, from the FAQs “customers who spend $25.00 or more in The Parliament Shop (excluding some ticketed events and lost tickets), can present their ticket for validation at the time of purchase” and receive complimentary parking. 🙂