Bernardi scores an apology. Plus other media tidbits of the day.

Bernardi, Pell get apologies. The Saturday Paper has issued an apology to Senator Cory Bernardi, after an article on his business dealings made a number of allegations of impropriety.

The article was published in February, and written by freelance investigative reporter Kate Doak. It’s now been removed from The Saturday Paper’s website, and in its place stands this apology:

“In discussing the financial and business dealings of Senator Bernardi, the article falsely alleged that one of the senator’s companies had been forced to surrender its security dealers’ licence after a review by ASIC, that the senator improperly used his electoral office as a place of business, that the senator withheld funds from a children’s charity, and that the senator breached parliamentary obligations in failing to comply with parliamentary disclosure requirements.

“The Saturday Paper and Ms Doak retract those allegations and apologise to Senator Bernardi for the distress and damage caused to him by their publication.”

The apology was also printed on page 2 of this Saturday’s edition.

In its report on the apology, The Australian said Bernardi had received a “healthy” financial settlement as well.

Also over the weekend, The Age formally apologised to Cardinal George Pell for a status update on its Facebook page that read: “Die Pell”. — Myriam Robin

USA Today, gone tomorrow? Plenty of executives may think it, but rarely do they actually give voice to a view as radical and potentially damaging as what we heard last week from David Callaway, editor in chief of USA Today, America’s third-largest selling newspaper. Media reports say he told an internet conference that USA Today may stop publishing a daily print edition within the next five to six years. It would be like someone at Fairfax Media, for example, publicly saying that The Sydney Morning Herald could stop printing in the next half a dozen years.

USA Today is owned by Gannett, which is about to spin off the paper and dozens of others into a standalone print company. Gannet’s newspaper business accounts for the bulk of the group’s revenue, but without the profits of the TV business, which will remain the core of the former parent. Publishing revenue slid 9% in the March quarter, while USA Today’s average Monday-to-Friday print circulation dropped 17% during the six-month period ending September 30, 2014. In fact, over the last decade, USA Today’s average weekday print circulation halved, from 2.22 million in the six-month period ending September 2004 to 1.08 million in the September 2014 half year. But the newspaper’s overall circulation has risen sharply thanks to changes in the way circulations are now measured and reported in the US. Sales figures now include digital editions as well as USA Today sections that appear in other Gannett-owned newspapers and in an increasing number of non-Gannett papers. These are branded inserts, which count as “sales”.

If USA Today were to close its daily print edition, it would become the second major US newspaper to go online only, following the Seattle Post-Intelligencer, which went all digital with in 2009. — Glenn Dyer

Good news for News? Darren Davidson and his interim boss, Julian Clarke, the stand-in News Corp Australia boss who is said to be about to “retire” again in a succession move, were up to their old tricks in the media section of this morning’s edition of The Australian. A story at the bottom of page 27 was headlined “Newspaper strategy paying off with improved profitability at News Corp, says Clarke”. But the recent third-quarter financial results from News made it clear the company’s news and information business suffered a fall in revenue and earnings. Clarke was really talking about the Australian newspapers — which are the single largest group of assets in the News Corp empire:

“News Corp Australia’s CEO, Julian Clarke has sounded a positive note about improving profitability of the company’s newspapers amid signs of a sustained rebound and taken aim at Fairfax Media’s aggressive cost cuts.”

Clarke and Davidson made this assertion without any evidence except:

“Although the parent company does not split out the results of its local arm in financial statements, figures provided in the recent third-quarter results imply that the Australian publishing division has significantly lifted its earnings before interest, taxes, depreciation and amortisation, a key measure of profitability, compared to the previous year.”

Davidson wrote: “Around the world News Corp has 1.2 million digital only subscriptions at the Wall Street Journal, The Australian, The Sun and The Times and Sunday Times.” But what he neglects to point out that the overwhelming majority of those subscriptions are held with The Wall Street Journal, and The Australian only has just over 67,600 digital-only subscribers at the end of March this year. — Glenn Dyer

Who’s buying APN shares? Irish billionaire Denis O’Brien has sold his 10.2% stake in APN News and Media for around $90.5 million. A filing with the ASX this morning revealed the sale of 102.859 million shares by O’Brien and a company associated with him (on the Isle of Man) called Baycliffe Ltd. The shares were sold on Friday, according to the filing this morning. It is not known who the shares were sold to.

News Corp holds a 14.9% stake in APN. Being a foreign company, News cannot have bought the shares from O’Brien, as it would breach the foreign investment rules, which limit foreign stakes to 14.9%.

A bid for APN from News would have great difficulty being approved by the competition regulator, the ACCC, because the Murdoch clan company controls more than 60% of the country’s newspapers. That is why News’ 50% associate, Foxtel, is limited to buying a 14.9% stake in the Ten Network. — Glenn Dyer

Front page of the day. Ireland has made history as the first nation to put marriage equality to the people. Your move, Australia … 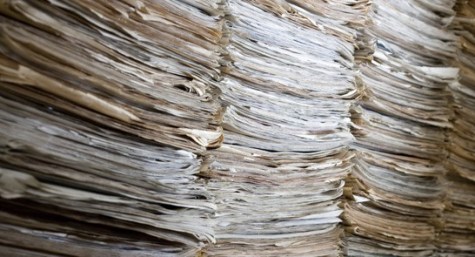 The Australian only has just over 67,600 digital-only subscribers at the end of March this year. It is believed by this subscriber that figure is only about thrice than that subscribe to Crikey.

Re the USA Today story, isn’t it more likely that Callaway was suggesting a weekly print edition? The prospect of the SMH and Age (for example) stepping back to weekend editions only has been on the cards for at least a couple of years now. And according to the Ad Age story you linked, Callaway said ‘a print product of some kind will likely continue for “the rest our careers”‘. This doesn’t sound like the paper is going online-only as Glenn suggests here.

Have you seen the front page of today’s Curious Snail.

all about how Rudd is not gods gift to knowing about China.

All the things that have happened in the world and this is the most important. Somebody there needs to get a life