Armaguard boss sacked ... Bill Leak in trouble ... and other tips and rumours

Australian continues to digest AIBM. Technology Spectator editor Supratim Adhikari is getting a promotion but also keeping his old job. In June he’ll join The Australian formally as the Oz’s editor of AusIT , the once-a-week section that remains the place the industry most likes to get its yarns. It’s had a bit of a shakeup in recent months. Editor Stuart Kennedy left in February, and veteran tech journo Fran Foo also departed soon after, leaving Chris Griffith as the only full-time tech reporter at the masthead (AusIT acting editor Mitchell Bingemann does telcos as well as tech). Melbourne-based Adhikari was flown up to Sydney to get a feel for the newspaper production side of things this week. He’ll also keep running things at Technology Spectator. Newsroom insiders are viewing it as yet another way in which The Australian is digesting the Australian Independent Business Media mastheads it purchased in 2012, which as well as Technology Spectator include Business Spectator, Eureka Report, Climate Spectator and China Spectator. The biggest transition will likely occur whenever Alan Kohler hands over his role as editor-in-chief of Business Spectator to The Australian’s business editor — Crikey has reported that’s expected to take place over the next few months.

Armaguard boss sacked. ABC’s 774 in Melbourne got a tip-off this morning that the general manager of security at Armaguard (a division of LinFox) had been sacked and investigations are underway. We heard from a tipster that “those who peered out the window at Essendon Fields last Wednesday saw Damian Waters sacked and escorted from the building”. ABC is also reporting that Waters has been dumped as a nominee to the Australian Security Industry Association Ltd (ASIAL). The ABC and our tipster both reported that there’s been suspicious circumstances around the sacking, but Armaguard didn’t return our repeated phone calls this morning. Our tipster says Waters’ replacement is already being discussed at Linfox “good news around the office watercooler is that Linfox employee and former head of Purana Taskforce, Jim O’Brien, is slated to takeover at Armaguard”. We’ll keep you updated.

Stella’s Challenge challenged. Yesterday TEDxSydney launched a new initiative called Stella’s Challenge to honour the memory of Stella Young, writer comedian and disability activist who died late last year. Young’s TEDx speech last year “I’m not your inspiration, thank you very much” went viral; it’s been watched almost 2 million times. According to the TEDx website, Stella’s Challenge is ” galvanising their creative and resourceful network to commission a national multi-media campaign, designed to lead the shift towards social inclusion for people living with a disability”. It asks people to donate money and expertise and make videos of conversations with people with disabilities. “Talk to someone with a disability, their families or carers, and find out what they want to see changed. Talk to your kids, their teachers, your employees, your boss, your local shopkeepers and sporting clubs about how they could be more inclusive.”

The campaign has already drawn the ire of some members of the disability community, with a petition started asking TEDx to reconsider how inclusive their own campaign is:

“#StellasChallenge, launched by TedXSydney and a host of other sponsors today, does nothing to address the real problems faced by people with disabilities — the things Stella was actually passionate about. There are no jobs being offered, no new funding for Stella’s amazing website RampUp — a place where people with disabilities had the capacity to share their own stories on their own terms.

“Instead, this campaign is asking able bodied people to speak to, or on behalf of, people with a disability — completely ignoring the fact that people with disability can talk for themselves or start conversations themselves. Like Stella did, every single day.”

Leak in trouble, again. The Australian cartoonist Bill Leak is never one to shy away from causing offence or making controversial points in his cartoons, but yesterday he managed to make an unlikely enemy. The cartoon (you can view it online here), which took aim at potential recruits to Islamic State, included a small parody of the Returned Servicemen’s League logo, which read “returned Jihadists League”, and yesterday afternoon we received a statement from the RSL condemning the cartoon as it connected the RSL to terrorists. The release called on the newspaper’s editors and Leak himself to apologise, but when we called him this morning, Leak hadn’t even heard about it. The RSL told us it hadn’t contacted the Oz but that the outrage was strongly felt among its members. “This came out of the blue,” Rear Admiral (and RSL president) Ken Doolan said. “The entire Victorian board, and the whole national board, have approved that press release. It’s very strongly felt.” As fans of Leak’s satire would expect, he has said he won’t be backing down anytime soon and was surprised that the RSL had taken offence. “I just find it quite unbelievable given the context of that cartoon and where it was placed that they would react in that way.”

Meeting Obama. Toddlers having tantrums in public is always awkward, but the worst possible place for it to happen would be in front of the President of the United States. Except that Barack Obama doesn’t seem to mind at all. 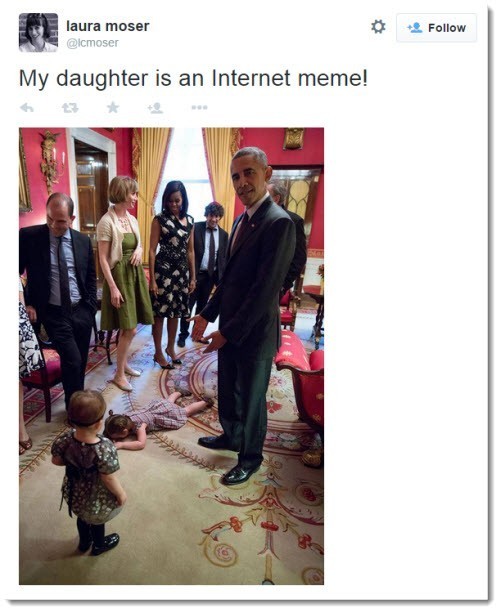