Morale at the Bureau of Meteorology is at rock bottom, amid veiled pressure from the Abbott government, write Crikey reporter Sally Whyte and Crikey editor Marni Cordell. 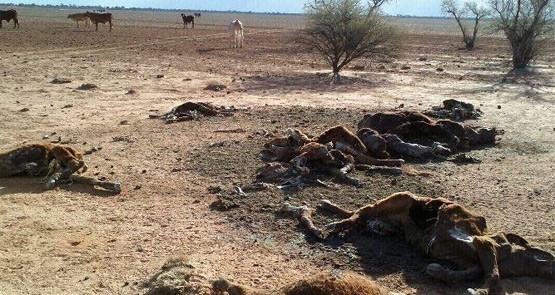 A Bureau of Meteorology insider says climate scientists are under pressure to undersell the influence of climate change in public statements.

The insider says that although there has been no specific directive from the government not to mention climate change, “there’s a high level of scrutiny on anything we put out that mentions it. There’s a perception that it has become political. People have become more concerned with messages that the government wants to hear.”

Staff within the division are trying to fly under the radar so as not to attract negative attention from a government led by a man who thinks climate science is “absolute crap”, and whose top business adviser thinks Australians have been taken hostage by “climate change madness”. They are afraid their funding will be cut and the climate division defunded.

The comments raise disturbing questions about whether Australians are being told the full story about the extent and effects of climate change.

The insider said climate change hadn’t been left out of reports on weather events or climate statements, but that it was not emphasised in press releases or other public communications. “It’s strange that facts about climate science are considered to be political,” the insider said.

Morale at the bureau is said to be at rock bottom, amid veiled pressure from the Abbott government, an ongoing dispute over wages, and hostile media campaigns from the conservative press.

Crikey understands that staff within the climate division are under increasing pressure from concerted campaigns by climate deniers and the activist press, such as The Australian, with staff frequently tied up responding to FOI and other requests. We understand staff at the bureau are under such scrutiny that they feel they are unable to make a single error, which can occur when dealing with historical data, so the processes are hugely time intensive.

BOM is also one of a number of government agencies currently negotiating a new pay deal with its employees, amid claims of ministerial interference. The most recent pay deal expired in July last year, but staff at the bureau are yet to see even a first-round offer. Community and Public Sector Union national secretary Nadine Flood says that the bargaining policy set out by Employment Minister Eric Abetz last year means that no federal public service agency has been able to make an offer to staff that they will actually accept.

“We are seeing an unprecedented level of direct ministerial intervention in this bargaining round, not even under the Howard Government did this happen, so it is unusual,” she said.

After the scrapping of the carbon tax and reduction of the renewable energy target, the Abbott government’s track record on the environment is looking increasingly dire. While Greg Hunt is the federal Environment Minister, insiders say he has been sidelined on climate change. In a broadside against the Abbott government in Parliament last year, Greens Senator Scott Ludlam said: “Your only proposal for environmental reforms thus far is to leave Minister Greg Hunt playing Solitaire for the next three years while you outsource his responsibilities.”

In last week’s federal budget it was announced that 102 jobs will be slashed from BOM, although staff have not been told which departments will lose positions. The government has also slashed funding to the CSIRO — the other main agency undertaking climate research in Australia — with $110 million cut in last year’s federal budget. Dr Paul Fraser, the head of the CSIRO division responsible for climate change research, took a voluntary redundancy as part of the cuts. He said last year “I can’t see how having lost the people we have out of our group that measures greenhouse gasses how we could survive if we had to lose more people out of that group”.

A nice way to conduct a debate

Environmental protection not a luxury good

Why aren’t I’m surprised? This must be the most incompetent government. It can’t make a successful case for its positive policies (yet another backflip on health), and it’s only successful ones are its negative ones (no carbon price, reduce the renewable energy target, stop the boats etc)

Crucially, farmers need BOM’s long-term “weather” forecasts to continue. It can be left up to the rest of us to say, “… and the trend is clear”.

For all of us, we need continued access to the current predictions from modelling and predictions of El Nino/La Nina and the Indian Ocean Dipole. Thought police can’t disapprove of hard science.

It’s not incompetence Wayne. It’s calculated kneecapping of the renewable energy industry on behalf of the coal lobby.

This all sounds depressingly familiar. Very much like the policy of Tony’s good friend Stephen Harper, whose government requires any researcher who gets any government funding to clear public statements through the Minister’s office. At least that’s a formal policy, though, not the subtle suffocation of the quiet word …

Which I noted that they competently did. It’s only spruiking their positive policies that they’re incompetent.