Rundle: roll up, roll up, and watch the right implode

When the right are actually advocating sterilising the poor, the end is probably nigh. 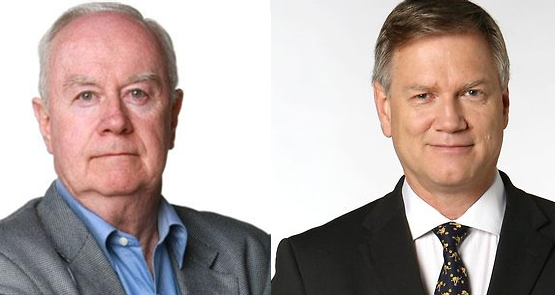 The latest episode of the great right-wing crack-up began a few weeks ago, when Paul Kelly used his bully pulpit in the Oz to thunderously denounce Andrew Bolt for his sustained opposition to the campaign for a “recognition” clause/preamble in the constitution. There are a lot of questions about recognition and the fact that the movement for it has become more or less a state apparatus, but Bolt’s comes from the wacky backwaters of the European right.

Acknowledgement of separate peoples means acknowledgement of white oppression and imperialism, and this would destroy the purity and wholeness of the nation. This is couched in the language of being opposed to “division” and “racism”(!), but its overwhelming concern is that the fracture running through our history not be acknowledged. Some of Bolt’s arguments, it must be said, overlap with arguments from the left — that the recognition process has been turned into a state-driven one, squeezing out dissent. But it’s wrapped up in his particular tormented politics.

For Kelly, this is irrelevant. Recognition is not a complex issue with many meanings and consequences, it’s mostly a way of dealing with some outstanding culture-war issues, so we can get on with the process of “reform”, i.e. the further neoliberalisation of the economy. Kelly wants the recognition process to be automatic and depoliticised, because he wants the subsequent process of restructuring to be the same. Bolt’s objections, which Kelly sees as simply crazy, are not part of the debate, but simply a roadblock.

If our polity denies recognition of this truth in our constitution then Australia probably faces a bleak future.

More amazingly, rather than debate Bolt’s points, he simply wonders if Bolt can be silenced by his editors.

This raises another question: as the referendum advances, how much liberty will be extended to Bolt by his editors to continue his campaign in their newspapers?

This is the same Paul Kelly, recall, who trumpeted that the 18C decision against Bolt was some catastrophe for free speech and a rallying point for freedom blah blah (when the Abbott govt bottled 18C abolition, Kelly groused that it had been turned into an IPA-style ideological issue. Yes, by people like Kelly. He’s hilarious.)

Kelly wasn’t saying that Bolt should be restricted because he wasn’t selling papers, but because he was — his fatuouswa was raising resistance to the state-run recognition push. So the Herald Sun‘s editors should do the state’s bidding in silencing dissenting voices on recognition. But 18C is wrong.

This is a problem that the right has made for itself — News Corp especially — and it will only get worse. The Howard government mobilised “traditional values” as a way of disguising neoliberalisation and globalisation, and Bolt et al were essential to that. But the differences between them, small at the start, have blown open. One section of the Australian right is now nativist, parochial, paranoid and increasingly obsessive — and many of them have columns in News Corp papers — while the other is trying to orient Australia to, well, to the Orient. The more insistent the latter get on being rational, the more obsessive the former become.

“When you reject basic scientific method for short-term gain, you rapidly lose your ability to create rational debate.”

Thus, in Kelly’s own paper, we have the latest entrant — Gary Johns, former Labor right minister — who has decided to reintroduce eugenics into Australian politics, arguing that women eligible for unemployment benefits should be obliged to use contraception to get payments. Last year, Johns was insouciant about the fact that this stricture would fall on indigenous women:

“Such a measure will undoubtedly affect strugglers, it undoubtedly will affect Aboriginal and Islander people in great proportions, but the idea that someone can have the taxpayer, as of right, fund the choice to have a child is repugnant. “

He reiterated it in a piece on Struggle Street, the SBS series, which showed people living lives that were much less than they might be, but which Johns concluded were not worth living at all.

Interestingly, when the UK version, Benefits Street, aired in the UK a year ago, people said a lot of terrible things, but no one raised forced contraception. Why in Australia? Because of our frontier history. It’s an idea that can only come back because a certain type of people are to be discontinued. It fits with Johns’ idea of cultural dissolution — that Aboriginal people should be dissolved as communities, and forced into regional cities through work tests, so that the transmission of Aboriginal culture is interrupted, and ultimately dies away.

Last year, the proposal gained criticism even from deep under the bridge where that sort of right live. But Johns has pressed on, with the announcement of a book, wittily entitled No Contraception, No Dole, from the go-to publisher for conservatives, Connor Court, out of Ballarat.

To even enumerate the contradictions of the proposal — oral contraceptives heighten stroke risk, especially in those with existing poor health; it would never survive a section 116 challenge on religious grounds; the Catholic Church would come out against it; and presumably your dole would be restored if you had an abortion, in which industry it might create a mini-boom — is to grant this abhorrent proposal credibility, but it was worth mentioning in passing to show how deranged it is. Yet there it is, sitting at the centre of the Oz. I doubt it’s much what the centre-right wants to be talking about, or to be identified with.

They have created this situation for themselves. Willing to pay host to a series of political obsessions useful in waging a culture war against the left, the centre-right now finds that these obsessives are more popular than they are. Once that starts, things start to go off in all directions: witness the bizarre wind turbine inquiry. Intended as tactical feints, these become the main game. It’s a lot easier to think about whether the Fabian society has a contract out on Andrew Bolt, or single mums are getting free cars, or a propeller is aggravating your bursitis, than it is to focus on core economic and social policy. Debating with them tends to draw you further into their rainbow-unicorn world, which is why Kelly would simply like the whole thing to be shut down.

It’s an extraordinary thing to demand — that one of your own colleagues be silenced (when you’ve defended him against being censored) — and another measure of the anti-democratic spirit that runs through much of the right at the moment. Their Eeyorish sighs that “reform” is impossible while people still have the vote (something Bolt indulged in as well), their willingness to plumb the depths of the 20th century for a forced sterilisation policy … none of it is serious now, but it will be in times to come.

For the moment, watch them tear themselves apart. Climate change denialism got them into this. When you reject basic scientific method for short-term gain, you rapidly lose your ability to create rational debate. It’s akin to the Nazis rejection of “Jewish mathematics”, e.g. Godel’s incompleteness theorem, which was the basis for Turing’s work, which created the computers that defeated the Nazis*. Having abandoned science, myth crept in, and before you knew it they were funding expeditions to find the hollow points at the North and South poles, which served as portals to the inner Earth, where the Aryans came from. And studies into wind turbines.

Sooner or later, Kelly and others are going to have to talk back to this nonsense, and much else like it — rule a line and establish some credibility. They’ll leave it late, and it’s going to be entertaining to watch, and a lot more deserving of our scorn than the other strugglers on other streets.

*No, I’m not saying these people are the moral equivalent of the Nazis.

I thought that the sentence referring into Nazi research into wind turbos was a typo’, similar to extraneous sentences occasionally creeping into my comments for unknown reasons.

But it’s true. There’s a book ‘die Geschichte der Windenergienutzung’ by Matthias Heymann, which mentions it apparently. It seems it was minor, and the proponents didn’t get much traction in the dictatorship regime.

“Such a measure will undoubtedly affect strugglers, it undoubtedly will affect Aboriginal and Islander people in great proportions, but the idea that someone can have the taxpayer, as of right, fund the choice to have a child is repugnant. “

Uh huh. I wonder how he feels about the vast sums of money handed out to “fund the choice to have a child” in the shape of baby bonuses, FTA, FTB, (potentially) PPL, etc ?

Why in Australia? Because of our frontier history. It’s an idea that can only come back because a certain type of people are to be discontinued. It fits with Johns’ idea of cultural dissolution — that Aboriginal people should be dissolved as communities, and forced into regional cities through work tests, so that the transmission of Aboriginal culture is interrupted, and ultimately dies away.

This sounds like far more is being read into the situation than needs to be.

It’s because of the old-school conservative belief that the poor should be punished, as an incentive to stop being poor. Because only people are who are lazy and irresponsible are poor – the road to wealth is hard work and personal responsibility.

Racism and classism seem to be being conflated here.

I do wonder how many of these columnists actually believe all the theories they spout or if they are just playing to the lowest common denominator?

interesting analysis of the bolt/Kelly issue and the issues this raises on the Right. I think it is similar to the issues for labour and greens on the left.

Just a theory Guy – but maybe the future will look more like one side Liberals (as in the true meaning of the word – i.e. not conservatives) drawn from centre right labour and current centre liberals ( basically the same anyway) and the other the Authoritarians (for want of a better name) with the Paul Kelly’s representing the further right oligarchs & establishment in a strange coalition with the hard left greens (SHY) who will happily dole dole endless rules and instructions for citizens that must be followed entirely for there own good.

If we’re talking about contraception, are the men expected to take responsibility as well?