The only thing worse than losing Eurovision, is winning it. And other media tidbits of the day.

Funding Eurovision. Over the next two nights, hundreds of thousands of Australians will tune in to SBS to watch Australia’s first and likely last performance at Eurovision.

The gig this year is hosted by Austria, who won last year, and funded in part by the European Broadcasting Union, which for 60 years has been putting on the Eurovision Song Contest. The EBU is a coalition of Europe’s public-sector broadcasters (with a few commercial stations thrown in), and makes most of its money organising joint bids for major sporting events like the Olympics and the Tour de France. Eurovision isn’t a large outlay for the body, as countries pay to compete. Five countries pay far more than others — since 2000, the UK, France, Spain, Germany, and more recently Italy — have paid outsized fees to compete, and in return been given guaranteed entry into the final. The exact details of who pays what are closely guarded, but FOI requests have revealed that in the 2009 contest, hosted by Russia, the BBC paid 279,805 pounds ($554,500) to participate, while Irish station RTE’s participation fee was just 55,000 euros ($77,340). SBS, which along with the ABC is an EBU associate member, hasn’t yet disclosed how much it paid.

Aside from the participation fees, the majority of funding to host a Eurovision contest comes from the host country, and has tended to vary wildly depending on who’s hosting and how much of an impression they want to make. Funding Eurovision is a lot cheaper than the Olympics (as there’s no need for purpose-built stadiums and the like), but still pretty expensive, though economic studies have suggested the national exposure and tourism revenues are worth it. 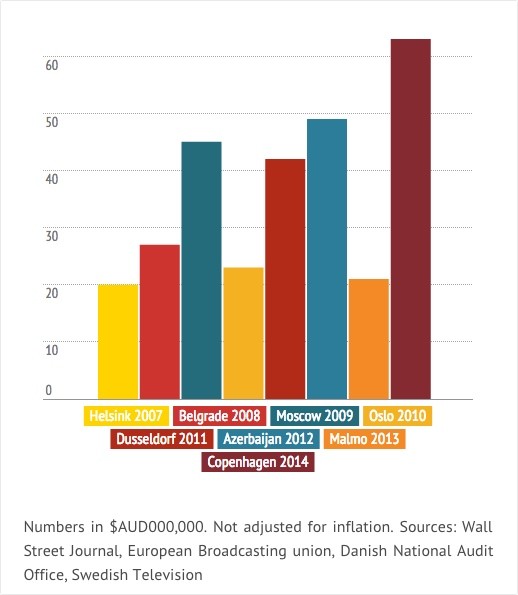 Whoever wins Eurovision one year, gets to host it the next. But the European Broadcasting Union has said Australia, even if it wins this year, won’t be allowed to host the contest next year, so there are rumours Germany will step up, though Guy Sebastian has said there are no concrete contingency plans in place. Rumours have abounded for years of countries purposely picking dud acts so they don’t have to host the thing. The Irish, poor things, have had to host Eurovision seven times by virtue of winning so often. Three of those times were in a row when Ireland won from 1993 to 1995. The only thing worse than losing Eurovision is sometimes winning it. — Myriam Robin

Daily Review will continue its close association with Crikey (including sharing office space, a bar heater and coffee runs), but the change means we are now a wholly independent publisher with our focus solely on the arts, entertainment and culture readership.

Today’s change of ownership comes after we launched the website in November 2013 with our aim of enlivening Australian arts and entertainment coverage with engaging, informed and conversational commentary, reporting and reviews.

Since we launched Daily Review our subscribers have risen to 65,000 people as we’ve published more than 2100 stories prompting more than 7300 comments from readers. We think this shows the great, and growing appetite among readers and audiences to engage in conversations about arts and culture. Whether we are audience members, artists or reporters, we are all active participants in the arts — not just passive consumers.

We don’t always get everything right, but we think Daily Review is unique in its approach in regarding all arts form across Australia as worthy of engaged and smart discussion, where we look beyond just which shows are on, but ask why they are on, and how they got made. We thank our readers, commenters, contributors, columnists and reviewers for becoming part of the Daily Review conversation. — Read Daily Review editor and new owner Ray Gill’s full explanation of the change here.

Letterman doesn’t beat own record. As expected, David Letterman’s final Late Show grabbed high ratings — 13.76 million in the overnight figures, according to Nielsen data. That made it the most watched episode of the program since 1994, when it was watched by 15 million viewers after a lead-in of evening competition in the women’s figure-skating from the Winter Olympics. The highest ever audience for the program was the debut on August 30, 1994 when 23 million people watched. The final night audience was around five times the average for the past year of around 2.8 million people. It was also the highest-rated program on network television on Wednesday, topping all prime-time programs earlier in the evening. — Glenn Dyer

Phone-hacking costs. Trinity Mirror, owners of the Mirror, Sunday Mirror and People newspapers in London, has been forced to boost its phone-hacking cost provisions after a larger-than-expected financial settlement in  the first group of phone-hacking legal cases against the group.

The High Court in London overnight ordered MGN Ltd, a subsidiary of Trinity, to pay a total of around 1.2 million pounds ($2.3 million) to the eight phone-hacking victims. Among the claimants was Sadie Frost, the former wife of actor Jude Law, who was awarded 260,250 pounds. Former soccer player Paul Gascoigne was awarded 188,250 pounds, and BBC executive Alan Yentob will receive 85,000 pounds.

The judge hearing the case said the claimants suffered “serious infringement of their privacy rights”. Trinity Mirror said it was adding 16 million pounds (nearly $32 million) to the 12-million-pound provision set aside in 2014. The new provision of 28 million pounds, or just under $56 million. And it’s no wonder the company boosted its payout pool because there are at least 70 more legal actions coming, according to The Guardian, including one from Sheryl Gascoigne, the wife of Paul Gascoigne.

Plenty of eyeballs but no cash. The half-year results from the Daily Mail and General Trust — owners of the right-wing tabloids the Daily Mail and Sunday Mail and the fast-growing Mail Online news website — has revealed an uncomfortable question for the company and all news websites: how can you keep getting high double-digital revenue growth as the revenue pot gets bigger, along with subscriber/visitor numbers?

The results show the Mail Online (currently the largest English-language news website in the world) boosted revenue 20% to 36 million pounds, or more than $70 million.

But the growth in actual revenue was not quite enough to offset a fall in revenue at the Mail and Sunday Mail newspapers. As a result total revenue across its Mail businesses fell by 4% to 296 million pounds compared with the same period last year (or close to $600 million). Revenues at the Daily Mail and Sunday Mail fell 6% year on year from 278 million pounds to 260 million, with an 8% decline in print advertising revenue and a 4% drop in sales revenues and circulations of both papers fell in the six months.

The print titles lost 18 million pounds (nearly $36 million) in revenue year-on-year for the period, while Mail Online managed to add 6 million pounds (or just under $12 million), a shortfall of nearly $24 million.

The company said Mail Online ad revenues jumped 47% in the US, meaning there must have been a sharp slowing in growth in the UK. Australia was not mentioned in the company’s filings. DMGT expects the Mail Online to gain more American advertising after the purchase of the US-based news and entertainment website Elite Daily.

But like so many other media websites, free and paywall, there now seems to be a trend emerging of where early rapid growth in revenue starts slowing as the number of users/browsers and visitors rises. Rapid early growth seems to mature very quickly, quite often leaving a shortfall with costs of the websites (the next big question for the Mail Online management) and the need to start earning profits to replace those being eaten up in the dead-tree businesses. — Glenn Dyer

Video of the day. Ireland will today hold a historic referendum on gay marriage. A taxi company has released this prank video of the “heterophobic taxi driver” to encourage its customers to vote yes. 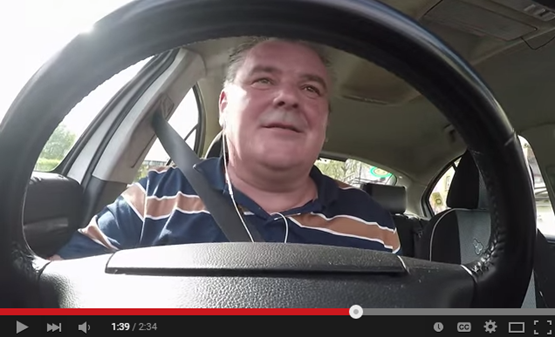 Front page of the day. Model Nicole Trunfio poses for the June covers of Elle. The one on the left is what you’ll see on news stands — the one on the right is being sent to subscribers only. 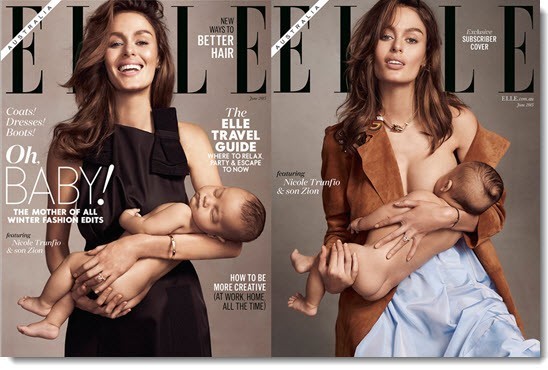 ” Eurovision isn’t a large outlay for the body, as country’s pay to compete. Five countries pay far more than others — since 2000, the UK, France, Spain, Germany, and more recently Italy — have paid outsized fees to compete, and in return been given guaranteed entry into the final.”

Country’s or countries? Has Crikey outsourced its subbing to New Zealand or has it just eliminated it?

Hi Rumtytum. Our chief subeditor was in an accident and so isn’t in the office these days (nothing too serious – she’s just recovering). Thanks for pointing out the error – I’ll fix it.