Whether it's his "cruel" policies on asylum seekers, or a scandal over Johnny Depp's dogs, Tony Abbott keeps getting blasted by international TV, newspapers and radio, writes Alan Austin. 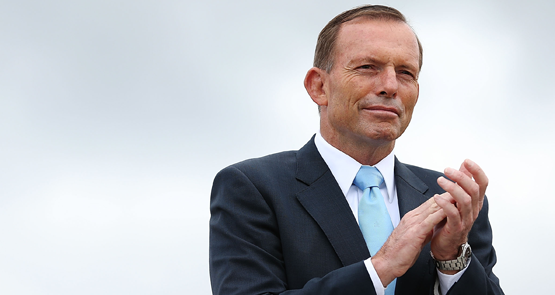 That was the depiction of Australia yesterday in the Daily Mail. This message has now reverberated around the world. An academic interviewed by Malaysia’s Utusan described Australia as “cruel”.

Newsweek Japan castigated the treatment of Manus Island camp inmates as “cruel and humiliating”. The journal noted that Australia is “a wide open, low population density country … yet Australia accepts an extremely small number of refugees compared with other advanced Western countries”.

Japan’s Nichigo Press ran a similarly critical analysis. It quoted refugee advocate David Mann saying, “the government is not only violating human rights” but is “denying Australians and the international community the right to know what it is doing”.

The New York Times ran an op-ed headed “Australia’s Rigid Immigration Barrier” with a harsh graphic depicting a razor-wire fence at sea. “The Abbott government’s strategy is to treat asylum-seekers who arrive by boat so terribly that they simply give up. Unconstrained by a bill of rights, Canberra has implemented a suite of harsh policies to this end.”

The Times was scathing of the Cambodia solution: “Refugees have been told of Cambodia’s ‘wealth of opportunity,’ and offered resettlement packages in exchange for volunteering. But the pitch is a fantasy. In November, Human Rights Watch reported on Cambodia’s failure to support refugees already living there …”

Russia’s Unification journal highlighted the cruelty towards children: “Australian authorities are accused of deprivation of liberty of children … This is a violation of Australia’s international obligations under the Convention against Torture and Other Cruel, Inhuman or Degrading Treatment or Punishment.”

Norway’s Dagbladet expressed a concern felt acutely in Europe: “Australia, which paradoxically is exclusively populated by immigrants apart from their own indigenous Aborigines, is notorious for its uncompromising policies towards boat people.”

Le Monde in France asked the question: “Australia avoids asylum seeker drownings, but at what cost?” It continued, “Canberra boasts that no migrant has died at sea in 2014 and 2015, attributing this change to the migratory tightening by Tony Abbott’s conservative government.”

The author is clearly sceptical: “But what happens exactly in these waters is difficult to verify. Tony Abbott compares his fight against illegal arrivals to a war situation and information on the operation is classified ‘defence secret’. If no boat has landed, this does not mean that no-one has tried.”

Some Italian journals approved Abbott’s approach. An opinion piece in L’Ultima Ribattuta claimed that to Europe’s refugee problem, “the solution seems to come from Australia”. The piece quoted Abbott’s mantra: “If you do not stop these boats you cannot stop the deaths at sea”. It concluded, “We hope this message reaches Italy and Brussels.”

L’Indro ran a similar line with the same Abbott quote, asserting “Canberra has the only effective strategy to capture human traffickers.”

L’Espresso quoted Italian Admiral Marzano who rejects Abbott’s solution: “I’m a sailor who spent twenty years at sea. I intervene to help people. A ship in distress, whether it is a boat full of immigrants or a merchant ship, should be assisted.”

And Abbott’s “nope, nope, nope” wasn’t the only reason Australia was in the world headlines. The Washington Post ran a story yesterday on the reversal of the migration trend from New Zealand to Australia: “For the first time in 24 years, 100 more people moved east from Australia to New Zealand than moved in the opposite direction.” It linked this with “Australia’s economy stumbling and New Zealand’s improving”.

The Wall Street Journal headed a report on another of Australia’s fractious regional relationships, “Australia Risks Snubbing China Over Military Drill”. It continued, “Australia hasn’t yet invited China to a major military exercise in the Pacific involving both Japan and the U.S. for the first time, risking a backlash from Beijing amid escalating territorial tensions in the South China Sea.”

The Washington Post ridiculed Australia with the story “Pup-roar: Johnny Depp’s dogs escape Australian death threat”. As did countless other journals and radio and TV outlets across the world.

The derision generated by the inept handling of that issue by Agriculture Minister Barnaby Joyce was exemplified hilariously by British-American comedian John Oliver in another classic Last Week Tonight report.

Not the first time, unfortunately, an Oliver humiliation of the Abbott administration has gone viral worldwide. Will it be the last?

What these articles omit is that Australia has:
6,468,640 immigrants; which is
2.8% of all immigrants in world; AND
is a massive 27.7% of Australia’s population.

Foriegn papers don’t have a vote

As the people smuggling criminal trade shifts to the Mediterranean and the Bay of Bengal, Tony Abbott risks becoming statesmanlike for Australia’s unqualified success in stopping the boats.

So Refugee media releases are sent to lefty publications around the world who duly publish them and quote from them, enabling Crikey to suggest that the world has risen up to join their hatred of Tony Abbott.

You guys are desperate.