In the final installment of a five-part series, Private Media’s publisher looks at how media moguls wield power behind closed doors, and influence important societal outcomes. 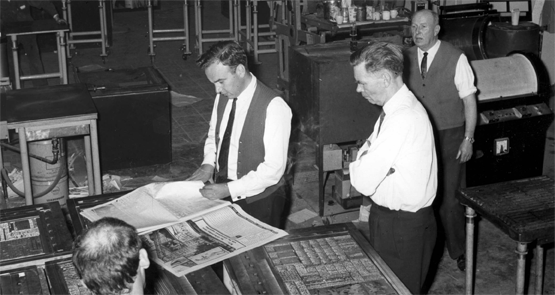 A young Rupert Murdoch looks over a proof of The Australian

“I think it would be fun to run a newspaper.”
— Charles Foster Kane, in an early scene of Citizen Kane

There’s an almost furtive sense of exhilaration in owning, editing or running a big influential newspaper or TV network. You get to decide the issues that matter, pull the strings that make powerful people jump, influence events that everyone else can only read about.

A snapshot of this surreal life was revealed by Phillip Knightley in his memoir, A Hack’s Progress. He tells the story of how, as a young journalist working for Sir Keith Murdoch’s Melbourne Herald in the late 1940s, he was co-opted to be Murdoch’s secretary on a visit to Canberra. Accompanying his father and Knightley around the bush capital was a young Rupert Murdoch, who had just finished school. Knightley writes:

“Murdoch [senior] had lunch with the Prime Minister, Robert Menzies, and I went along to hand out the cigars and field telephone calls. Then he dictated a letter to his fellow newspaper proprietor Sir Lloyd Dumas, of Adelaide. It gave a summary of what had been discussed over luncheon, including four or five paragraphs on what the Prime Minister had said about the likelihood of an alteration in the currency exchange rate between Britain and Australia and advice on what Dumas should do to take advantage of the inside information …”

This is the subterranean world of media proprietors, their lieutenants and their supplicants. It’s a world where power, money and ideas are brokered between those who require good media coverage, and the owners of that coverage, who, in turn, have their own commercial and ideological requirements. This is a world of posturing, greasing and finessing, not usually crass deal-making. There are no rules, just interests, and for media bosses there’s definitely no rule against having a lot of fun in the process.

“You can demonise me by using the word power,” Rupert Murdoch told his biographer William Shawcross in the early ’90s. “But that’s the fun of it, isn’t it? Having a little smidgen of power.”

A lot of people have a little smidgen of power in their own principalities, but none of them spend their entire lives being duchessed by prime ministers and presidents, and fawned over by public figures, business leaders, society toffs and groveling employees.

“The deferences and preferments that this culture bestows upon the owners of great newspapers are satisfying,” acknowledged Conrad Black, who once controlled newspapers stretching from the London Daily Telegraph to The Sydney Morning Herald (and later ended up in jail for almost four years on charges of fraud and obstruction of justice).

“What was most enjoyable,” said Black, “was being at least a presence in the great debates over the foreign policy issues of our time … I had access to cabinet ministers and historians, academics from the best British universities, and thinkers from that extraordinary seam of British intellectual life. The Telegraph’s magic opened doors in Europe and even some in North America.”

Henry Luce, the American magazine publisher who created Time, Life and Fortune, was another mogul who enjoyed the preferments of media ownership. On one occasion, after a dinner party attended by an array of A-list intellectuals and celebrities, he asked his hostess how she managed to attract such important people. “It’s very simple, Harry,” she said, “we just tell them you’re coming.”

Media power is wielded behind closed doors for the obvious reason that the only people in a democracy with that kind of influence are supposed to be elected. Anyone who has spent time at the top of a big newsroom, or inside a proprietor’s inner sanctum, understands how the levers work to influence, and sometimes determine, important societal outcomes. Mostly, it’s influence applied responsibly. Mostly, the decisions are ethical. But if the doors are closed, who would ever know when power is abused?

From the outside, big media businesses try hard to appear like any other commercial enterprises. The difference, of course, is that the widgets manufactured in media factories are words, images, ideas and influence, a composite currency with a premium exchange rate that can’t be measured.

Which is why no media owner today would dare to admit — as Lord Beaverbrook did to a Royal Commission into the Press in 1947, when asked why he published the Daily Express — that “I run the paper purely for the purpose of making propaganda, and with no other motive.”

No other motive except the exquisite satisfaction of controlling the chessboard.

Yesterday: How to manage politicians

Beecher: Why Murdoch defies gravity while other owners have to play by the rules

So. That’s it. Man who claims to be the ultimate media insider actually has not a single fact to convey from his own experience. Not even an anecdote.
Which reflects accurately his career as both a journalist and publisher.

It’s interesting to hear the suggestion Murdoch senior helped a friend make money from “insider trading” on currency, and IF true shows a generosity in sharing info which would work against the financial interests of the giver.
What it says about the CURRENT media world however surely isn’t worth quite so many words?

Yes, Nob. Warung, Beechers product is so worthless you subscribe to, (presumably) read and bother to comment on them.

It’s free Liam. You’re a mug if you’re paying anything