Try calling Centrelink now ... Aston vs Sampson, a battle of brawn and ego ... a young person finds a timecapsule ...

Centrelink to the phones. Yesterday the Australian National Audit Office revealed that nearly a quarter of the 57 million phone calls made to Centrelink last year went unanswered. Fairfax reported that Australians spent 143 years waiting to speak to the welfare agency without any luck. While those numbers won’t come as any surprise to anyone who has had to deal with Centrelink, we hear that the reaction at the Department of Human Services has been swift:

“It appears management are hitting the panic button. There are reports this morning that up to 500 processing staff across the network been told to drop what they are working on and get on the phones. Insiders claim this is a desperate and short-sighted attempt to window dress the staggering waiting times. While it might bring some relief for punters stuck on the phone, it is creating the mother of all backlogs for the hundreds of the thousands of Centrelink clients waiting for claims to be processed and paid. Just heard all training and office meetings have been cancelled across the board and staff ordered on the phones. Crazy.”

There were also reports this month that Centrelink has taken up to 14 weeks to process applications for students applying for payments, so we doubt that putting extra staff on the phones for a few days is going to help.

Do you even lift, mate? Earlier this week Ms Tips was shocked to see that Todd Sampson (CEO of Leo Burnett, Fairfax board member and Gruen Transfer panellist) was on the front cover of the Fitness First magazine, and as news.com.au put it “under his T-shirts with zingy catchphrases on them, he’s been hiding a tight rig”. In the interview, Sampson talks about how important exercise is to him and how he still manages to work out with his busy schedule. This couldn’t be allowed to pass unmentioned by Rear Window’s Joe Aston — Sampson has made regular appearances in his column over recent months:

“Anyone serious about exercise knows that rippling abs have little to do with health or functional strength and everything to do with isolated exertion for vanity’s sake. But at least doing 4000 crunches gives you plenty of time before a fat-stripping smoothie to read the board papers.”

Is that the green-eyed monster rearing its head? We suggest Aston and Sampson both get their kit off for an athletic contest, so Ms Tips can objectively compare their functional strength.

BoM threat neutralised. Yesterday, we were tipped off that ABC management had told producers and content makers not to call Bureau of Meteorology forecasters during industrial action to prevent protest messages about the union and agency negotiations about a new pay deal being read out on air. Now we hear from a source in commercial radio that high-level management at the bureau called his station yesterday asking that the station not call the bureau’s forecasters during the next round of industrial action — looks like the efforts are being thwarted all over the place.

Youth finds phone book, freaks out. Recently, a small child asked Ms Tips what a VHS cassette tape was, and it was a sad day. Today is also a sad day, as this picture has appeared on Reddit, titled “local teenager discovers a relic of the past … the phonebook”: 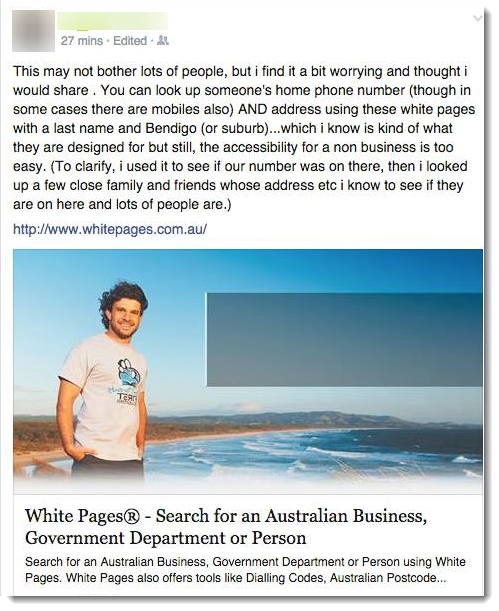 The Facebooker seems very concerned about the amount of information about them on the internet, but as one commenter noted — the yoof is posting on Facebook so he or she can’t be too concerned.

Chardy swillers at 10 paces. The Greens have long been referred to with derision as “chardonnay-swilling lefties”, but it looks like two of their senators have decided to turn the label on its head, holding a “wine-off” in Adelaide next month. Senators Penny Wright and Peter Whish-Wilson are set to host an event that pits Tasmanian and South Australian wine against each other as well as gourmet food and, of course, some politics. Whish-Wilson and his family run the Three Wishes vineyard and cellar door in Tasmania’s Tamar Valley, and he even has a wine degree. Three Wishes specialises in riesling, chardonnay and pinot so we’re sure they will be on the menu.

Tell us how you really feel. Followers of The Age on Facebook were shocked by a status that appeared this morning from the newspaper, which seemed to make a pretty strong statement on Cardinal George Pell. It was taken down after about an hour and editor Andrew Holden told 3AW that the account was hacked. We’re pretty sure hacking doesn’t really work like that, but at least we know what someone there thinks. 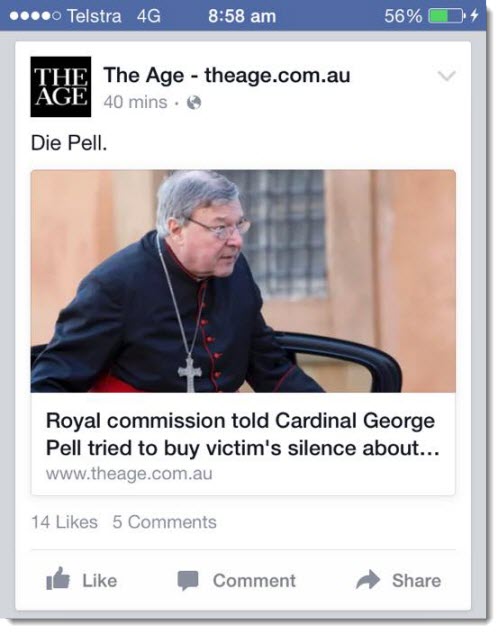 The Age’s comment is German for “The Pell”. Nobody who speaks German could be a bad journalist.