Rundle: who’s afraid of the latte-sippers? 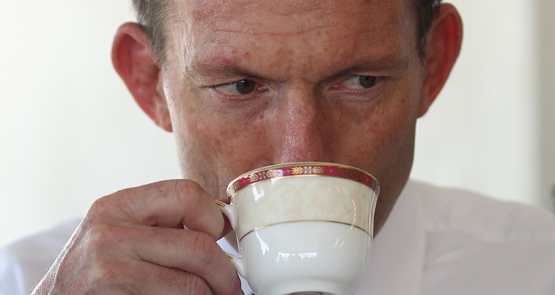 The latte-sippers are back! They barely went away, but the metaphor seemed to fall out of favour. Nationals MP Michael McCormack told Tony Abbott to get away from the “tapas bars” and come see the “real Australia” at Grong Grong — the dying wheat town with a lifestyle subsidised by, well, tapas and lattes. Paul Keating, arguing the cause of Barangaroo, the most cutting-edge global urban development of 1982, revived the old “basket-weaver” insult from that era to assail Clover Moore (confusingly, because she wanted to keep the cruise ships coming and going). In these pages, Toby Ralph, of the Bernard Salt school of forecasting — “it’s coming your way and it’s called a cappukino!” — had some advice for the “kombi-van” Greens. Now, again over Sydney planning, evidence-free roads fanatic/minister Duncan Gay has slammed “latte-sipping zealots” for objecting to his proposed traffic drains NorthConnex and WestConnex.

This headbanging gets more intense as the people doing it get more panicked. The “latte-sippers”, etc, are now a social class in their own right, and they sit at the centre of the new information-culture capitalism, which complements mining as a major earner, and will grow as the other declines. That’s the economy people like Keating wanted, but he never imagined that the class that arose from it would be the next iteration of the “Balmain basket weavers” of yore. The “basket weavers” were too small to have class heft, and were dependent on the public institutions for their existence. The culture-knowledge-policy (CKP) class aren’t. They’re in the centre of the market, but they haven’t simply melted into a generic suburban style, as I suspect many imagined they would (when they thought about it at all). Instead they’ve reshaped the cities where they’re based, formed their own political parties, pushed their own agenda — and in doing so, taking with them much of the intellect and innovation that Labor-led progressive movement relied upon.

Thus something like Barangaroo, Houston-by-the-sea, becomes a site of struggle, as does urban transport, and a hundred other issues. People were so accustomed to the CKP class fighting for others — the oppressed, here and elsewhere — that they are still adjusting to the spectacle of the class fighting for itself, and how it wants society to be. That’s one of the reasons that there’s an explosion of charges of “hypocrisy” every time the class or its party acts efficiently in pursuit of its own ends.

Hence the bizarre expostulation when the Greens had a smooth leadership transition. There are arguments for and against party leadership being decided by MPs alone, but they’re hardly of huge principle. There’s pros and cons to membership-based elections, but to hear the commentariat you’d think that Christine Milne and Richard Di Natale had cut up and barbecued a pup seal at their hand-over press conference. The fury directed at them was from Labor types, trumpeting membership-based leadership contests as democracy (it ain’t; it’s a response to a failure of legitimacy within the party) and from the press gallery members who have been “organisation people” their entire life, and find the very existence of the Greens, and a set of far-reaching aims, to be a standing rebuke to their own personal weakness.

The leadership transition in the Greens marked a clear declaration, in my opinion, that the party was observing that social-cultural shift, and reshaping itself for that new world. Di Natale’s announcement that they are aiming, as an ongoing thing, for a 20% vote may have appeared vainglorious to some, given the 8% dumper in 2013, but it’s entirely within reach, as socio-cultural change clicks on a bit. The trick for the Greens is how they get there. Di Natale’s strong pitch was the argument that they should be more open to negotiating with the Coalition, to see what agreements they could get. That would seem the obvious corollary to the idea that the class they represent has become mainstream. But it may also be a road to disaster, and a misunderstanding of what its class wants, and where the party can expand to vote-wise.

“The Greens are a protest party,” Toby Ralph wrote on his golfball typewriter, unbuttoning his safari suit, sipping on his pina colada (“the hot new drink of the season! And by hot I mean cool!”). Of course they aren’t. They’ve taken power — full coalition in Tasmania, binding-agreement federally — where it’s been possible to do so. Both times to short-term loss, but possible long-term gain, in showing that they are serious about power. There are still arguments to be had around that — the time is not always ripe to abandon oppositionality — but there are times when you have to take such power as is available, or you’re not really in politics at all.

But deal-by-deal politics is another proposition entirely, and a far riskier one. You may well get this or that legislative achievement — but as political achievements they’re often buried in a welter of claim-and-counter-claim. If you’re not in power, then you can be easily double-crossed, and look like a mug. And above all, you blur the line between your party and the general process of the politics. That’s fine if you’re a party that alternates in power, less so if you are a party that is both part of the system, but one that also poses a challenge to its operating assumptions.

That’s not a question of the Greens being more moral than other parties — if you want to know about, I could tell … well, maybe leave that one there — so much as it is of the new worldview and process they bring to it. Greens politics is system-politics: the idea of the world as a series of intersecting systems that must be run, in complex and reflexive fashion. The older parties were founded in a world where thinking was “pre-systemic” — there was a realm, an arena, a set of specific values, and you fought for them. In recent decades, they have had to adapt such politics to the new world, with varying results. Since the late 1980s, when there was a rise to prominence of the greenhouse effect and a series of environmental disasters, the whole of politics has been tending towards system management. That’s why it feels like it’s all draining away to a technocratic middle — and why rebellions against such, e.g. climate change denialism, wind turbine syndrome, have to be so flagrantly irrational to gain any purchase. The Greens are, in the long run, the party in waiting for leadership, because their class is in waiting for leadership. What was once external to the main business of politics now surrounds and contextualises everything that was mainstream politics.

Given such a trajectory, deal-making might appear the obvious next stage for the Greens. But that amounts to an assumption as to what its core class want from the Greens, and perforce its other groups of supporters. The Greens may well be purveying a form of systems-management — going in a certain direction towards social justice and equality — as the way forward, but it’s not the management of this system, as it stands. A party saying, as it must, that our current trajectory threatens the possibility of global disaster within one long lifetime has to be careful about what sort of consent it does extend, if it is to retain its identity and support. The party has survived the bruising encounters of power here, but they may want to look further afield for examples of political disaster from such measures: the UK, for example, where the Lib-Dems reward for five years of co-operation has been to be sliced, diced and cannibalised by their former partners, reduced to eight seats from 58, and 8% of the vote from 23%, and facing a decade or more of rebuilding – and perhaps, permanent damage and diminution. They wouldn’t fit in Toby Ralph’s Kombi for a trip to the espresso bar. Get it on the telex! The latte-sippers are on the march again!

As the rate of climate disasters increases, a new voting block will grow, of angry youngsters demanding replacement of carbon-based fuels. Preparing for them requires the Parties to surrender their love affairs with natural gas, and their indulgence of the so-1900’s fears of nuclear electricity.

Guess I’m one of those “…still adjusting to the spectacle of the class fighting for itself, and how it wants society to be.”

Lets not forget that’s pretty well the way the history of capitalism has unfolded ever since Marx noticed the spectacle. The “class” that Guy Rundle is celebrating is presently around 10% of the population, at least as translated to the ballot box. The last NSW State election resulted in that number generating 3 lower seats – to the great rejoicing of Guy, Crikey and the Greens. That vote was highly concentrated in the wealthy inner cities, and (as many are now starting to notice), wealthy Liberal urban areas in the northern and eastern suburbs too. Unfortunately it declined or was stagnant elsewhere. In working class electorates, it is typically around 4-5%, often lower – and declining.

In the Oz today, that association of the Greens with wealthy electorates was noticed too. “Greens day has dawned – ALP” said the teaser head. I’m sure Guy read it.

Money, it seems, is triumphant once again and “fighting of itself.” Well, this is the way capitalism works – as Guy well knows. Bizarre to see an ex Marxist so pleased about it…

Is Guy an ex? He must be! Happy to sip a chardonnay with Guy anytime… Cheers!

@ Coco – I agree with your comments, but thought I was the only one who suspected that the Greens were closer to the LNP than Labor will ever be.
If Di Natale makes one deal with the rAbbott, people will suddenly wake up to where the Greens are coming from.
And it won’t be pretty. Meg Lees anyone???

‘Selling out’/becoming more mercenary to reward their supporting class isn’t the Greens biggest challenge, thats an inevitable process that will consolidate their vote. Their biggest challenge is that their supporters and current policies assume growing or at least stable economy, which is so last century. Once real decline arrives in Oz we’ll see how durable the claimed values of their post-materialist supporters are.