We should not rush to put too much stock in a single poll that shows the Prime Minister is on the way up. 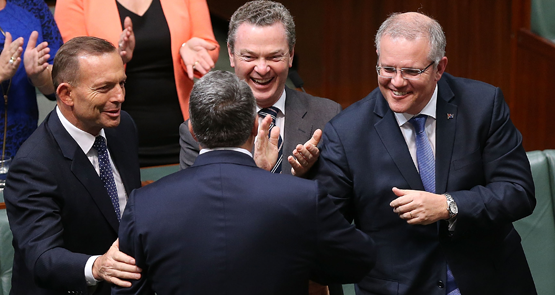 The government has enjoyed a good deal of positive press this week concerning reaction to its budget, which has unquestionably scrubbed up a lot better in the court of public opinion than last year’s effort.

However, journalists’ natural fondness for a comeback narrative means there is at least some suspicion that the theme has been pursued with excessive gusto.

Certainly it might be thought that the result of the Fairfax-Ipsos poll that showed the Coalition drawing level with Labor on a two-party preferred basis garnered more coverage than it was worth, given that no fewer than five other polls over the past week have found Labor maintaining its lead.

Those wishing to take a contrary view can always cherry-pick findings from Galaxy, which found more respondents saying the budget made them less likely to vote Coalition than more likely, or Essential Research and ReachTEL, which had nearly twice as many respondents saying it would leave them worse off than better off.

What is actually needed to gauge the budget’s immediate political impact is historical perspective. Happily, this is provided in spades by Newspoll, which has been asking the same suite of questions for The Australian –– relating to impact on personal finances, impact on the economy, and the opposition’s capacity to have done a better job — after each budget since the late 1980s.

These results are illustrated in the charts below, along with a scatterplot demonstrating the strength of the relationship between personal impact and impact on the economy, with this year’s finding represented by the pink dot.

The first point to be noted is that the Coalition usually does better than Labor, which reflects the tendency of the Coalition to be rated more highly on economic management, while Labor performs better on service delivery. Taking that into account, Newspoll’s results for all three questions were in the middle of the range for a Coalition budget.

The apparently strong result on the budget’s economic impact, with 46% expecting it to be positive compared with 28% for negative, must be understood in terms of a general tendency of this measure to produce favourable results — a trend bucked only in the late Hawke-Keating years, and again last year. Likewise, the superficially positive finding that only 36% felt Labor would have done a better job, against 51% who thought otherwise, was fairly mediocre by historical standards.

Where the budget really hit the mark was in persuading voters there was something in it for them. Poll respondents invariably take the view that budgets are better for the economy as a whole than for them personally, so Newspoll’s finding that 20% anticipated a positive impact, as opposed to 30% for a negative impact, is better than it looks.

Out of 29 comparable results from Newspoll going back to 1988, the net rating of minus 10% ranks eighth highest, with five of the seven that surpass it dating from the sustained revenue-and-handouts explosion of 2004 to 2008.

Given the tight budgetary context, and the appalling damage the government inflicted on itself a year ago, that could well be considered no small feat.

Drilling down a little further, the target most squarely hit by the budget appears to be small business, thanks to the temporary increase in the threshold for immediate tax deductibility of assets from $1000 to $20,000.

A particularly interesting result on this score emerged from ReachTEL’s poll for the Seven Network, which broke down voting intention by employment status and found the Coalition leading Labor among small business owners by 60.6% to 27.5%.

Comparison with results from the Australian National University’s Australian Election Study survey suggests this gap has widened since the 2013 election by around 3.5%, despite ReachTEL’s aggregate voting intention result going 8% the other way.

Similarly, this week’s Essential Research poll found that fully 66% of respondents felt the budget would be good for small business, compared with only 6% rating it as bad. That the corresponding result for big business was greatly more modest (34% good compared with 10% bad) is particularly helpful for the government, given the forceful impression it gave last year that it was only interested in those at the top of the pile.

Of course, it will take more than just the small business vote for Tony Abbott to consolidate his recent poll resurgence all the way to a second election victory. But it’s a highly promising sign that his present poll upswing has been at least partly underwritten by the bread-and-butter domestic issues highlighted in the budget.

The last time the polls trended in the Coalition’s favour, they did so in response to the MH17 tragedy and the first of many terrorism crackdowns. As the news cycle moved on from these events towards the end of last year, the poll recovery swiftly evaporated.

Polls do indeed go up and down, as politicians so often like to point out. But some movements prove more durable than others, and the government has cause to hope that this one will stand it in good stead at the only poll that matters.

The only people to have a positive view of this budget haven’t read it, don’t understand it or have fallen for the News Ltd propaganda.

Even the winners don’t actually win to any significant degree. it will do nothing positive for the economy, misses opportunity and probably will exacerbate structural problems.

I don’t know why Abbott is portrayed as a fighter. Anytime he meets opposition he just caves in

From what I have read of his boxing style he just rushed in throwing punches as if to prove he wasn’t scared. Energy from terror so as to speak

Abbott is the weakest leader since McMahon. He’s there because his owners want a spineless courtier who will do exactly what they want. The rest of us have to be bribed to vote for the man. Unfortunately a significant plurality of Oz voters are quite happy to be bribed – as long as some imagined Other is losing a zero sum game.

How on earth anyone could trust this government enough to vote for them (again?) is completely beyond my ken.
Most useless and dangerous government ever!!

The media’s preoccupation with poll results says more about the media trying to find some relevance, as much as one can believe what the polls are indicating.
The Murdochracy must not be believing in polls as they have started to denigrate Bill Shorten (more than usual) with this mornings headline of saying he is becoming the same as Julia Gillard every day, particularly with this comments about a carbon price.
Labour is starting to give out some policies it can take to the election (carbon price, superannuation taxing, chase multinationals on tax rorting) and the big end of town are worried they might have to start paying their way.