Myanmar’s refugee crisis all but ignored by Australia

Australia's response to the discovery of slave camps and mass graves in south-east Asia, as well as the persecution and exodus of Muslim Burmese is black mark against our international duty. 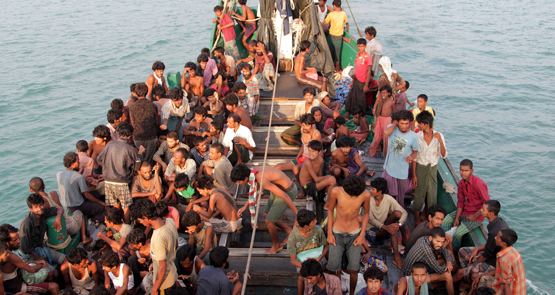 Three weeks after the grisly discovery of dozens of bodies in a slave camp on the Thai/Malay border, there was finally some good news for the thousands of refugees — mainly stateless Muslim Rohingya people from northern Myanmar (and some from Bangladesh) — whose exodus, caused by religious conflict, and subsequent kidnap culminated in the camp deaths.

At least 7000 “boat people” have been stuck at sea since then, and now Malaysia, Indonesia and belatedly Thailand have agreed to take them in for 12 months, provided they can then be resettled elsewhere.

While enormously welcome, it’s still only a stop-gap measure that does not address the root cause of the problem: the discrimination and violence against the Rohingya that have led some to describe conditions in Myanmar’s western state of Rakhine as similar to apartheid.

The discovery of the camp on May 1 quickly lead to the uncovering of more camps — and more graves up and down the Thai coast. It was, at last, an admission by the country’s government of the human trafficking rackets that had resulted in both Thailand and Malaysia being downgraded last June by the US government in its annual Trafficking in Persons Report to a Tier 3 nation — on par with Iran and North Korea.

Most unfortunately, when the camps came to light, the two nations stepped up sea patrols blocking anymore boats landing. At this point, it was estimated between 7000-10,000 people were stuck on boats in the hands of either people smugglers or human traffickers. While their lives were in some danger in the camps on land, that danger exponentially increased at sea, and for the past two and half weeks that is where they have been stuck, a fortunate 1500 or so have managed to make it ashore, unwanted in Malaysia and Indonesia — most rescued by sympathetic fisherman rather than authorities. The UN has estimated that about 120,000 people have fled Rakhine state, other parts of Myanmar — particularly Kayin state — and Bangladesh in recent years.

Nobody knows how many more boats have been pushed back into international waters in the past three weeks. Nobody knows how many have died, but reports say that several boats have lost contact, and the number could run into the several hundreds, or more, to join the 1500 or so people that aid groups say have perished at sea since the exodus began in earnest three years ago. That’s when sectarian violence was stepped up by apparently peace-loving Buddhists against the Muslim Rohingya, who are not recognised as citizens by Myanmar’s government despite there being between 1 million and 1.3 million of them who have been in the country for generations.

So lucrative is the human trade that former drug traffickers are understood to have switched their “cargo” in recent years. It is a black mark of shame on the Association of South East Asian Nations — whose plan for the formation of an Economic Community on December 31 this year is looking increasingly like the smoke and mirrors that it is — that this has been allowed to happen as the world, horrified, watches on, unable (or unwilling) to help. The group’s policy of not interfering in each others’ internal affairs is looking like the three monkeys that see, hear and say nothing.

Two days ago, finally, the Philippines spoke up, saying it would accept any refuges who made it around to its coast lines, however unlikely that was.

“There are no easy answers here, but one of them is most certainly not to sit idly by while other human beings … starve, dehydrate and die …”

For Thailand, the crisis is proving particularly thorny for the ruling military junta because, following the revelation of the camps, it has been forced to admit what is an open dirty secret in much of the country. Dozens of arrest warrants have been issued for police and local government leaders involved in the deaths, and there have been reports in the local media about the involvement of officials in the Thai navy and army. Yet the Thai government did at least call yesterday’s meeting, a precursor to a larger regional summit to be held in Bangkok on May 29.

And so, at last, to Australia, which has been noticeable by its silence, as is its habit these days when it comes to dealing with the region’s various despots, dictators and oppressive governments. Despite having one of the  region’s best navies there has been no offer by Australia to help search and rescue the people stuck at sea; indeed, as of this morning, there was still no plan to do this at all, and it’s worth noting that Singapore has been another wealthy, silent nation.

Meanwhile, the government in Myanmar remains in denial saying it is not responsible for the problem. With an election coming up, Aung San Suu Kyi’s opposition National League for Democracy has only reluctantly made any comments about the need for help, and will not go as far as to promise the Rohingya full rights. And with all this, not a peep from Australia, although Julie Bishop did raise the issue of the situation in Rahkine, although not on the water, in talks there last June

It’s no small irony that the only government in the region that Australia regularly and publicly takes to task is Indonesia’s — the only functioning democracy in south-east Asia. Crikey has made this point before but frankly it cannot be made often enough so hypocritical is the Abbott government’s stance: to stay mute about the actions of dictators and scream blue murder when two Australian are killed. The message is clear, Australian lives are worth far more than those of others in the region.

Yet what could Australia really say when its own policy is to “push back the boats” and damn the consequences?

Just what to offer at the May 29 meeting, which Australia will attend, will be a something of conundrum. Bishop yesterday added back $6 million in new aid for Myanmar — though this was after she stripped it of $28 million — in a budget grant for “emergency food, shelter and protection” in Rakhine state, so next year’s allocation is still $22 million down on the current year.

And, to be fair, Australia has been one of the biggest aid donors to Myanmar in recent years. But Bishop’s announcement still managed to avoid the topic of a refugee crisis or use the now poisonous “boat” word or talk about why the crisis has occurred

There are no easy answers here, but one of them is most certainly not to sit idly by while other human beings, including children as well as pregnant women, starve, dehydrate and die in the ferocious, baking sun of the hottest time of the year in this part of the world. It is also a time when the rains have started, marking the end of the sailing season. The rickety boats that many of the refuges are committed to are barely seaworthy, let alone able to cope with any kind of severe weather.

The appalling situation with the Rohingya and Bangladeshi refugees is now the biggest regional seaborne exodus since the Vietnam War. In between, despite Australia becoming wealthier it has also hardened its collective heart. And for that, we are a lesser country.

How would giving more aid to a govt that refuses to recognise Rohiingya are Burmese-born help the Rohingya? Is this to be a secret under-the-table deal, ie., we will give you more money if you stop being so cruel to your Rohingya? And won’t that result in further blackmail from Burmese govt? Seems to me ASEAN plus Australia have to get tough with Myanmar govt – and Opposition. But of course to be credible on this, Australia has to lift its own boat people game.

When Burma was granted full and unconditional independence, no one cared about the fact that there were large numbers of people who were fearful of being placed under Burmese Rule. Australia has enough of its own problems without do-gooders demanding we do even more than we already are about a planetary problem for which there seem to be no effective answers anyway.

The 800,000 Rohingyas in Mynamar (there are 1 million elsewhere) are savagely treated as stateless, non-citizens by the racist Myanmar military dictatorship as are 4.3 million Occupied Palestinians and 6 million exiled Palestinians by US-, UK- and Lib-Lab Australia-backed, genocidally racist democracy-by-genocide Apartheid Israel.

British Zionists persuaded pro-Zionist Churchill to veto the Joel Brand plan for saving 700,000 Hungarians Jews – in the end, about 400,000 perished , including all but a dozen of my family. For details of this horrendous Zionist betrayal of Jewish people see “Jews Against Racist Zionism”: https://sites.google.com/site/jewsagainstracistzionism/home and see items under “Brand, Joel” and “Brenner, Lenni”; also read A. Weissberg’s book “Advocate for the Dead”.

Before and during WW2 the racist Zionists had an appalling and deadly policy of opposing Jewish haven anywhere except Palestinian Arab-populated Palestine (see W. Laqueur, “The Terrible Secret: Suppression of the Truth About Hitler’s “Final Solution”” and B. Wasserstein, “Britain and the Jews of Europe”1939-1945”). Due to such opposition from racist Zionists and from “traditional” anti-Jewish anti-Semites, only 9,000 Jewish refugees were taken in by Australia in the period 1933-1945 and Jewish refugees were completely excluded from New Zealand, Alaska, British Rhodesia, British India and from South Africa, 1936-1945 (see Martin Gilbert, “Jewish History Atlas”, page 90).

As for Bangladesh refugees, one notes that Australia was complicit in the WW2 Bengali Holocaust (6-7 million Indians starved to death by the British for strategic reasons and the first WW2 atrocity to have been described as a “holocaust”; see Bengali Holocaust (WW2 Bengal Famine) writings of Dr Gideon Polya”, Gideon Polya: https://sites.google.com/site/drgideonpolya/bengali-holocaust ) and Australia is a hugely disproportionate contributor to a worsening climate genocide that acutely threatens both Bangladesh and Myanmar (see “Climate Genocide”: https://sites.google.com/site/climategenocide/ ) . Decent Australians will respond to Abbott’s heartless “nope, nope, nope” by saying “nope, nope, nope” to the Coalition and will vote 1 Green and put the Coalition last.