The Wall Street Journal is slashing newsroom jobs. And other media tidbits of the day.

Hard times ahead. In today’s Fin, with columnist Joe Aston bears this warning for his colleagues:

“[T]here’s a palpably sombre mood in the ranks of Fairfax Media’s editorial management as they prepare to implement yet another round of major cost-cutting in the news division that contains (what’s left of) The Australian Financial Review, The Sydney Morning Herald and The Age.

“Senior management isn’t denying the axe is being sharpened again, although the precise size of the program is not yet final … “

Aston’s piece could well be intended to soften the blow when cuts are announced later this year. But as he recounts, the prospect of job cuts even at the major mastheads won’t be surprising to anyone who’s been listening to Greg Hywood’s public announcements over the past few months. To investors, Hywood always makes the point that if there are further cost-savings to be made, he’ll find them and make them. Still, the metro papers already thinned their editorial staff considerably. That includes the Fin, The Age in Melbourne, the Herald in Sydney and the Canberra Times in Canberra. Fairfax has already taken a big axe to staff (including journalists and photographers) levels in regional papers in Victoria, and currently in southern NSW, especially on the Illawarra Mercury.

We contacted Fairfax this morning for more detail on the Fin/SMH/Age cuts, but received no response. That said, we’ve been hearing our own whispers, particularly about the Canberra Times. Staff there were told to expect a redundancy round earlier this year, and are bracing for an announcement in coming weeks. We gave Fairfax the opportunity to refute or elaborate, but again, the company didn’t bite. — Myriam Robin and Glenn Dyer

Update: After our deadline, Crikey received this response from Fairfax: “There is no proposal, but we will always continue to look for efficiencies across the entire business.”

Meanwhile … While local News Corp journos seem protected, their American cousins haven’t been so lucky. US media websites say News Corp has started another round of job cuts in The Wall Street Journal newsroom. The reports say an unknown number of contracts are being bought out. The cuts are being made as the Murdoch empire beds down budgets for the 2015-16 financial year. The first round of meetings on the budgets started a week ago.

The Dow Jones Co and Wall Street Journal are bleeding millions of dollars in lost revenue, according to the recently released News Corp third-quarter financial report.

The news website reports point out that similar offers to buyout contracts were made a year ago to between 20 and 40 journalists, many of whom are said to be older, more costly employees. There are just under 2000 people in the Journal newsroom and the Dow Jones Newswires. The recent News Corp third-quarter report revealed a weakening in the financial performance of Dow Jones in both the three- and nine-month periods ending March 31. That helps explain the new round of job cuts. — Glenn Dyer and Myriam Robin

Women for Media branches out. Since 2012, philanthropist and board director Carol Schwartz has been bankrolling Women for Media, an initiative that aims to raise the low number of women quoted in business and financial journalism in Australia.

“The UK is really ripe for this initiative,” Women for Media executive director Amy Mullins told Crikey. “Their media speaks about a lack of women speaking in the media very often, especially the BBC, but also others. They are quite self-reflexive. And the 30% club were really keen to push this and see it as one of many drivers to increase the number of women on boards and in executive roles.”

The collaboration has other benefits — the 30% Club is itself expanding to many countries (including Australia), and there are possibilities for Women for Media to roll out in other places as part of that expansion.

The launch of Women for Media UK last night was opened by Helena Morrissey, the CEO of Newton Investment Management and the 30% Club’s founder. Others featured at the launch included journalists from the Financial Times and Bloomberg. Bloomberg’s presence is unsurprising — in November last year, the organisation’s news chief editor Matthew Winkler told journalists they had to include one woman’s voice in every enterprise story they wrote. “Women are engaged in every topic we cover. Our journalism should reflect that variety,” he wrote in a widely distributed memo. — Myriam Robin

Murdoch gets some competition. There’s a new, aggressive foreign player in the US media market who will make Rupert Murdoch sit up and take notice. French telecommunications group Altice SA overnight said it agreed to buy the seventh largest of America’s major cable companies, Suddenlink Communications, in a deal valuing the company at US$9.1 billion, including debt. Altice is buying 70% of Suddenlink from existing shareholders BC Partners, CPP Investment Board and Suddenlink management. BC Partners and CPP Investment Board will retain a 30% stake.

Altice is controlled by French billionaire Patrick Drahi, who has emerged as the most dynamic business in the French telecoms and media sectors. It has gone from being a nobody in the French telecoms sector several years ago to a major player through a couple of audacious deals. Altice and its Numericable-SFR broadband operations were created in a 17-billion-euro deal  early last year, which turned it into one of the biggest telecommunications companies in France, with 6.5 million fixed-line customers and 22.5 million mobile customers.

The deal, which was first rumoured on Tuesday, and became fact early Wednesday morning, US time, is the big cable transaction the US industry has been waiting for — but not the one everybody thought would happen. That was the proposed Comcast purchase of Time Warner Cable, which collapsed earlier this month after US regulators moved to frustrate it. Dependent on that deal was a separate merger in which Charter (which had bid for Time Warner) would have bought Bright House, the sixth-largest cable group in the US. That deal still remains afoot, with both parties yesterday extending a deadline to allow talks to continue.

Altice’s move into the US cable business partially reverses the move into Europe by Murdoch (through the purchase of Sky Italia and Sky Deutschland by Sky of London, 39% owned by 21st Century Fox). — Glenn Dyer

Italy’s financial police probe Murdoch clan. Italian regulators said Tuesday they are probing possible collusion between Sky Italia (owned by 21st Century Fox, the key Murdoch clan company) and Mediaset (controlled by Berlusconi) in connection with the 2014 sale of broadcasting rights for the Serie A soccer competition. The two broadcasters are the country’s two major commercial broadcasters. They share the rights to broadcast games in Italy’s premier soccer competition (where Berlusconi’s team, AC Milan, is performing badly) on satellite and terrestrial TV.

Italy’s feared financial police department, the Guardia di Finanza, said on Tuesday it had conducted “inspections” in six locations across Italy in regard to the sale of TV rights to the media groups, but refused to provide specifics about what was being investigated. But Italy’s competition authority, which was also involved in the inspections, said it had opened an inquiry into the broadcasters and professional football leagues in connection with bids for Serie A matches for the new contract period from 2015-18. It said it was investigating possible “sharing agreements” (and possible collusion) between Sky and Mediaset, and that it appeared that the final agreement between the parties did not necessarily reflect the bids that had been made. It said it was investigating the possible restriction of competition, against EU rules, and the possible exclusion of new entrants into the market. The authority said the probe would be finished by the end of April next year, according to The Guardian and Financial Times. — Glenn Dyer

Front page of the day. Newcastle Jets owner and downtrodden former billionaire Nathan Tinkler has put the A-League club into administration. The Newcastle Herald gives him a red card … 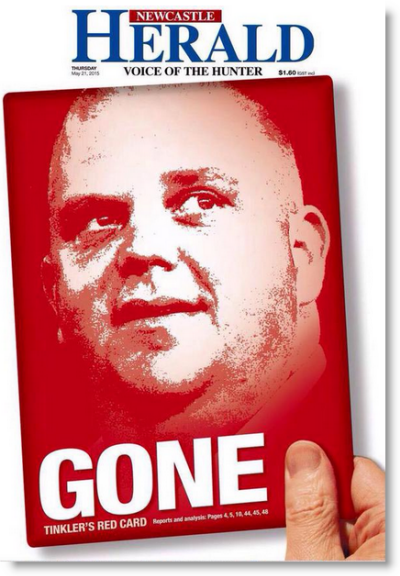