In the fourth of a five-part series, Private Media's publisher answers the question, just how does Rupert Murdoch exercise such fearsome power over world leaders? 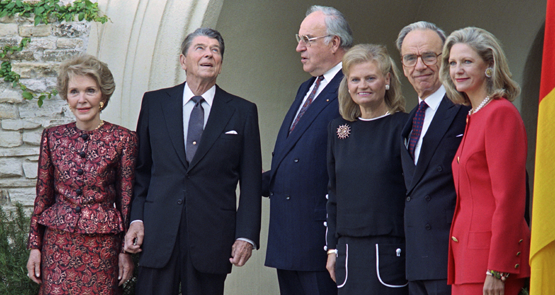 “Prime minister, I have on my desk in front of me a very large bucket of shit which I am just about to pour all over you.”
— Kelvin MacKenzie, editor of London’s The Sun, September 1992

In the 62 years since he inherited the Adelaide News and parlayed it into a global media machine, Rupert Murdoch has finessed the art of exercising political power.

No longer is it the blunt tool it was in the 1960s, when he used it to try to buy a slice of mining magnate Lang Hancock’s mineral prospects in the Pilbara. Hancock was prepared to cut a deal with Murdoch — then, as now, owner of The Sunday Times (Perth) — but was being blocked by the Western Australian government. “If I can get a certain politician to negotiate, will you sell me a piece of the cake?” Murdoch asked Hancock, according to Robert Duffield’s 1979 biography of the miner, to which Hancock replied, “‘Yes, by all means’.” Duffield continues:

“Rupert went off to see him, and I went home to bed. Ten o’clock that night there’s a knock on the door and it’s Rupert. ‘You’re in!’ he said. ‘How on earth did you manage that?’ I said. ‘Simple,’ said Rupert. ‘I told him: Look you can have a headline a day or a bucket of shit every day. What’s it to be?’”

The dynamic between powerful political leaders and media owners has always been complex in its intensity, hostility and interdependence. In the US, a large and politically mature country, no mogul since William Randolph Hearst in the first half of the last century has exerted the level of influence and fear still wielded by media owners in smaller countries like Australia and Britain.

Before the arrival of digital media and 24-hour news cycles, the relationships between political leaders and media barons were largely conducted in secrecy. Occasionally tensions flared, as they did in British Parliament in 1919 when prime minister Lloyd George attacked the mogul of the day, Lord Northcliffe, as a victim of “diseased vanity” and added: “Out in the street they used to joke: ‘Have you heard? The Prime Minister has resigned and Lord Northcliffe has sent for the King.’”

No Australian prime minister has dared to say such things in public about any Murdoch (Keith, Rupert or Lachlan), Packer or other local media barons. Paul Keating privately told Tony Blair, prior to Blair flying to Hayman Island in Queensland to secure Murdoch’s endorsement to become British PM: “He’s a big bad bastard, and the only way you can deal with him is to make sure he thinks you can be a big bad bastard too,” but even the feisty Keating would never say such things in public about a media mogul.

Murdoch’s role in politics is legendary across three continents. A recently declassified diplomatic report from the US National Archives reveals that the US consul-general in Melbourne in 1975 cabled the State Department that “Rupert Murdoch has issued [a] confidential instruction to editors of newspapers he controls to ‘Kill Whitlam’,” adding that “If Murdoch attack directed against Whitlam personally this could presage hard times for Prime Minister; but if against Labor government would be dire news for party.”

When Murdoch supported Ronald Reagan in the 1980 presidential campaign, according to congressman Jack Kemp at a 1981 dinner honouring the media owner, “Rupert used the editorial page and every other page necessary to elect Ronald Reagan president.”

The former British prime minister John Major told the Leveson Inquiry, set up in the wake of the UK phone-hacking scandal, that Murdoch demanded his government change its policy on Europe or his papers would oppose him at the 1997 general election. “I think the sheer scale of the influence he is believed to [have], whether he exercises it or not, is an unattractive facet in British national life,” Major told the inquiry, “and it does seem to me an oddity that in a nation which prides itself on one man, one vote, we should have one man, who can’t vote, with a large collection of newspapers and a large share of the electronic media outlets.”

Of course, Major never said anything like that when he was prime minister. Nor do any of the Australian prime ministers and senior politicians who turn up to meet Murdoch every time they visit New York, because they know that’s where the power resides. They do it because they live in a nation that still operates like an outsized version of a country town — the kind of place where the mayor, a few business owners and the local newspaper publisher make all the big decisions.

It may look like an unseemly way to run the world’s 12th-biggest economy, but think about it like this: in Rupert Murdoch’s seven decades as a fixture across the global political landscape, 13 Australian prime ministers, 12 US presidents and 12 British prime ministers have acquired and lost power while one man remains entrenched and unelected.

Yesterday: The myth of Murdoch’s power

Tomorrow: The thrill of power

4 thoughts on “Beecher: how to manage politicians”