Blame it on the weatherman? Not at the ABC ... have we found the PMs oldest fan? ... and when libertarians and radical feminists collide ...

No BoM protest on the ABC. As part of ongoing negotiations between public service agencies and the government over new pay deals, the staff at the Bureau of Meteorology announced earlier this year that forecasters would use their crosses to ABC radio programs to read protest messages and draw attention to their cause. The messages were scheduled as part of industrial action days earlier this month, but they never made it to air. Ms Tips hears that content makers and producers at ABC radio stations were told not to call BoM on those days, so the messages couldn’t go to air. According to one source, the direction came “from high up in local radio” and was communicated verbally by line managers. Staff were told not to put the instructions in writing. We asked the ABC why staff were told not to call the weather boffins on those days, and were told by a spokesman:

“It is inappropriate that ABC airtime is used to deliver an industrial message. ABC Editorial Policies clearly state that editorial should  not be improperly influenced by political, sectional, commercial or personal interests. Editorial teams are of course free to report on the story if they consider there’s editorial merit in it. Audiences still receive up to date weather across the broadcast schedule, and editorial staff draw on the BoM websites which provide our broadcasters with a range of detailed reports.”

Crikey understands that protest messages are still part of planned action by staff at the bureau, but it remains to be seen if they make it on air.

Affection for Abbott waning. Have we found the Prime Minister’s oldest fan? Albury-Wodonga’s Border Mail is reporting that local resident Doris Macken celebrated her 106th birthday this week, but her professed affection for Tony Abbott has been tested this year. Last year Macken told the Mail that Abbott was her favourite PM, but she’s not quite as keen this year:

“In the past year Miss Macken has moved into the new Albury and District Nursing Home on Logan Road, but not much else has changed — except for her love of Prime Minister Tony Abbott.

“At her 105th birthday, Miss Macken said he was her favourite out of the 25 prime ministers she has lived to see but she began to question that affection after he awarded a knighthood to Prince Philip.”

Away from prying eyes. A caller to 6PR in Perth has said that the windows at the dining room in Parliament House in Perth have recently been changed, and are no longer tinted , meaning that now people outside can see in. The caller said that a lot of members are now apparently asking to be seated away from the windows. Seems like there’s some shady meetings going on there.

Greens bite back. The Sydney Morning Herald is reporting that a “Melbourne Cup field of contenders, including members of her own hard left faction” are taking on Greens Senator Lee Rhiannon in the party’s preselection battle for the federal election due next year. But when we asked around about the report, a Greens source told us the suggestions in the article were laughable:

“It’s nonsense to suggest that an anonymous Greens source who refers to the ‘eastern bloc’ and disparagingly refers to Jim Casey as ‘Left of Chairman Mao’ is somehow privy to his motivations and strategies for Senate preselection. What today’s Herald failed to mention is that the Senate preselection isn’t just for the lead spot, it is for the entire ticket — including the potentially crucial number 2 position. There is a strong feeling across the party that a double dissolution election is on the cards which gives the second candidate a decent shot of being elected, hence the wide-ranging field. The candidates associated with the Left of the party, including Jim, aren’t running to knock off Lee but to support her on the ticket and grab the second position. This has obviously pissed off people associated with Cate [Faehrmann, former Greens MLC who ran for the Senate in 2013], who thought she’d have a dream run — hence the backgrounding of journalists. The most bizarre aspect of the report was that of the candidates who are apparently in the ‘eastern bloc’ (a term used to refer to left-wingers in the Greens from the eastern suburbs of Sydney), three live in regional NSW and one lives in Western Sydney.”

Usual and unusual suspects. Yesterday we wrote a little bit about the tendency of Ballarat-based book publisher Connor Court to release conservative, niche publications (it will publish Gary Johns’ imaginatively titled No Contraception No Dole later this year). A tipster got in touch to tell us that Connor Court also recently published Freedom Fallacy: The Limits of Liberal Feminism, a collection of essays featuring many radical feminists. Our tipster attended the first launch party of the book in Carlton recently and said it was quite the experience:

“There was a strange mixture of right-wing males (a lot of self-identified libertarians) and radical feminists at the first launch. The Connor Court males were an interesting anthropological type, I have to say. I’ve heard the legends but never met a herd of them in the wild before. And they apparently weren’t used to mixing with my species, either. ‘Not the usual Connor Court crowd here tonight!’ one of them exclaimed. ‘How is it different?’ ‘Well – more left. And more…female.'”

There’s another launch for the book at Readings in Carlton tonight — sounds like a prime people-watching appointment.

Heels or go home at Cannes. Are you a woman with legs and a professional interest in art-house films? If you ever get invited, nominated or merely want to attend the Cannes Film Festival, be sure to pack some heels. The festival got in a spot of bother after turning away a number of female attendees in their 50s who wanted to attend the premier of Todd Hayne’s lesbian romance Carol. The reason given? They wore rineststone flats. Screen Daily asked the festival what was up, and was told it was “obligatory for women to wear heels at red-carpet screenings”. One Australian filmmaker who has attended the Cannes festival in the past said that she had worn heels, not knowing about the rule, but described it as “barbaric” when contacted by Crikey.

Giving people a step up. The Prime Minister has been in Queensland over the past few days, dropping in on quite a few local members. We loved this picture from ABC reporter Marlina Whop — it shows that while Ken O’Dowd is an upstanding local MP, he needs a bit of assistance when standing next to Tony Abbott (who comes in at a fairly average height of 5ft 11 inches). 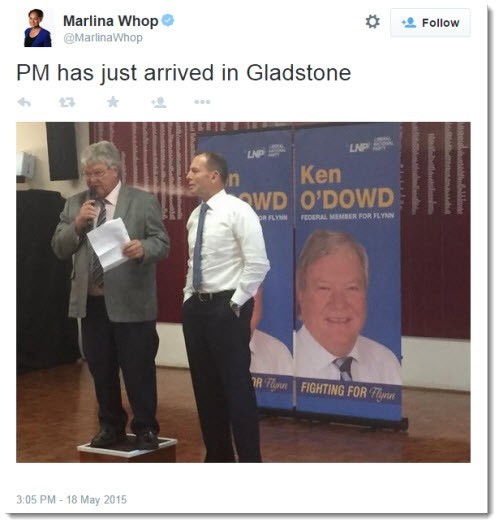 I still haven’t forgiven Connor Court for publishing Ian Plimer’s ‘Heaven and Earth’ (I was unfortunate enough not only to have bought it, but even worse, read it).