The legacy of Letterman: an unromantic misfit says farewell

Despite his many successes, Late Show host David Letterman was always an outsider, a misfit who never quite became the new Johnny Carson. He became something more. 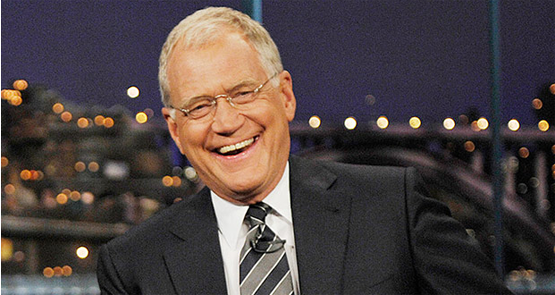 Here’s one test I was always going to pass: David Letterman trivia.

On arrival at the Ed Sullivan Theatre, the Broadway home to Letterman’s venerable Late Show for more than two decades, a staffer quizzed me on my “favourite characters” on the show. With demand for tickets to a taping high, audience wranglers wanted to ensure only true fans got in the door.

“Where do you start?” I told the staffer. Paul Shaffer obviously, the band leader and “musical genius”, to use Dave’s moniker, television’s most flamboyant straightman. Or Alan Kalter, the hilariously game announcer, happily playing up his imposed creepy persona, who introduces his boss each night — “Daaa-vid Lett-errrr-maaaaaan” — with familiar exuberance. When, after the September 11 attacks, Kalter introduced the phrase “from New York, the greatest city in the world” into his preamble, this kid from Queensland, Australia, believed him (and, after visiting the Big Apple twice, still does). And Biff Henderson, the intrepid floor manager — he’ll have the headset on when they’re viewing the body, Dave joked on his third-last show, Monday night — who out-avunculared the host in his frequent on-air appearances.

There’s props guy Pat Farmer, not out of place in any police line-up, who, with jolly stagehand Kenny Sheehan, used to disturbingly recite transcripts from Oprah Winfrey’s show (“you go, girl”, Farmer would deadpan while puffing on a cigarette). Rupert Gee, the immigrant deli owner around the corner, mild-mannered sandwich-maker by day turned Dave’s unlikely quiz host at night. And Stephanie Birkitt — “Smitty”, Dave would call her — his personal assistant, whom he would telephone at random moments in the show to talk about whatever was on his mind. (We would later find out the pair had an affair; an associated extortion bid was addressed by Letterman in a searing confession that somehow only endeared him to us more. From 9/11 to his own health and well-being, for an awkward man, he nailed the tone in every moment.)

Not to forget Dave’s own mother, Dorothy — now 94 with an undiminished midwestern sunniness as counterpoint to her surly son — who would act as Letterman’s Olympics corespondent, Thanksgiving pie-baker and perhaps one of only two devices that would truly slice through Letterman’s cantankerous nature. (The other was his own son, Harry. Letterman insisted he was too old for fatherhood when Harry was born in 2003, but the way he would break his hard-bitten character to gush over baby photos offered a rare glimpse of the human underneath. It might have made him No. 1 rather than Jay Leno’s almost perennial whipping boy, if audiences had seen it earlier.)

Letterman shared the spotlight with the friends and freaks who lurked in the theatre, turning the camera around each night and opening the bonnet to reveal the absurdity of the machine. The stakes were always charmingly low. As critic Stephen Metcalf noted on the most recent Slate Culture Gabfest, Letterman gave the impression of knowing he was wasting his life. This “little dog and pony show”, as Dave liked to call it, wasn’t going to change the world. In acknowledging that each night, he managed to change the world of late-night TV, at least, in important ways.

The enthusiastic staffer in the theatre foyer probed me further: “What are some of your favourite segments on the Late Show?”

Easy. It wasn’t the opening monologue, the standard current affairs shtick of the writing room collective that even Letterman didn’t manage to evolve since his hero Johnny Carson honed it. And it was rarely the celebrity interviews, the late-night staple Letterman tolerated — but always refused to crawl inside the guest’s bowels like Jimmy Fallon and others with a false claim on his turf (we watch Stephen Colbert’s takeover of the Ed Sullivan Theatre in September with wary interest) …