Australians were more interested in the fates of two celebrity dogs than the budget release.

A clear sign of how well this year’s budget has gone for the government compared to last year’s is the amount of coverage Agriculture Minister Barnaby Joyce has received over the “war on terriers” incident after film star Johnny Depp brought his two dogs into the country illegally. It might have barely got a mention at this time last year. The tax cut and $20,000 instant write-down for small businesses seems to have really captured both media and punters’ attention, with reports that up to one in five voters will use the write-down, and the government bouncing back immediately to 50-50 in the polls, a position it hasn’t been in for over a year.

Criticism of ministers’ use of the terms “double-dipping” and “rort” to describe people who had accessed both employer and government parental leave schemes seemed to blow over after a couple of days, while PM Tony Abbott quickly got back to some tough talk supporting ASEAN countries who had turned back asylum seeker boats.

Other movers included Industry Minister Ian Macfarlane as a deal was finally done on the Renewable Energy Target and the government backed away from Fortescue Metal Chairman Twiggy Forrest’s call for an inquiry into the iron ore market,  and Communications Minister Malcolm Turnbull, who offered his interviewing advice to ABC current affairs presenters that they might catch more flies with honey. Malcolm pushing for Andrew Denton to host 7:30 perhaps?

And finally, PUP leader Clive Palmer yo-yoed back into the top ten after he had a good old crack at former PUP colleague Senator Glenn Lazarus’s new party, the Glenn Lazarus Team, which was announced just in time for State of Origin in lovely maroon livery. All very confusing for Blues fans who remember ‘the Brick’s’ mighty feats for the cockroaches. 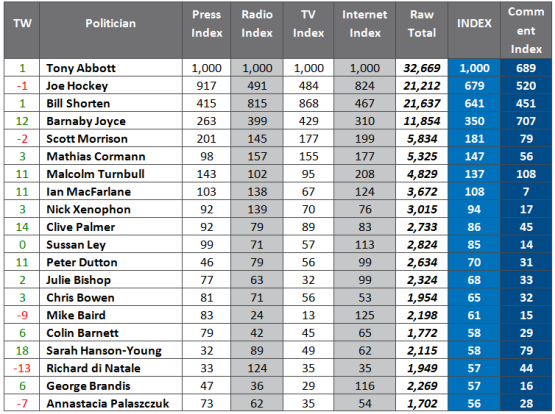 Over 20,000 tweets for Barnaby Joyce, almost getting him ahead of Bill Shorten and Joe Hockey in Budget week.

And Cap’n Jack’s corgis (they weren’t corgis? Sorry, I have wolfhounds, all small dogs look the same to me) even got them going on talkback, although with a larger smattering of support for the Agriculture Minister.

I, for one, quite like not having rabies and anyway, I reckon Johnny Depp has never reached the heights of 21 Jump Street in his subsequent career, so I’m not sure what all the fuss is about?