60 Minutes fires back on claims MH17 program got it wrong

A veteran journalist has taken on Channel Nine's 60 Minutes for its coverage of the MH17 crash. But Channel Nine says its facts are easy to verify.

Channel Nine’s 60 Minutes has vehemently dismissed accusations it had “misled viewers” in its MH17 expose, which aired last Sunday and laid out the evidence for the program’s contention that Russian separatists had shot down the plane.

The program used video and photographic stills to follow the path of a truck carrying an anti-aircraft launcher through scenery in eastern Ukraine — territory controlled by Russian separatists. Posts on social media on the day of the attack charted the truck’s progress, 60 Minutes claimed in its report, relying heavily on work by citizen journalist Eliot Higgins (the founder of citizen journalism website Bellingcat), who has garnered worldwide praise for his painstaking digital investigations into war and conflict done from his house in Leicester.

But American investigative journalist Robert Parry, who is famous for breaking many of the Iran Contra stories in the 1980s, accused the program of “possible TV fakery” in an article posted to independent news outlet ConsortiumNews.com on Monday.

In it, he said territorial control at the time of the attack was fluid. He also accused 60 Minutes of not having matched the images of the truck’s journey with the location it claimed for them. “This was the documentary’s slam-dunk moment, the final proof that the Russians and particular Vladimir Putin were guilty in the deaths of 298 innocent people … [But] the scenes look nothing at all alike if you put them side by side,” he wrote. “While [60 Minutes reporter Michael] Usher is standing in an open field, the earlier video shows an overgrown area. Indeed, almost nothing looks the same.”

Parry also cited sources with the United States intelligence community who said they had hesitated to blame Russia for the attack, as they could find no evidence Russia had delivered the anti-aircraft Buk system to separatists in Ukraine:

“I was told by a source briefed by U.S. intelligence analysts was that at least some of them — after reviewing electronic intercepts, overhead satellite images and other intelligence — had reached the conclusion that the shoot-down was a provocation, or a false-flag operation, carried out by a rogue element of the Ukrainian military operating under one of the hard-line oligarchs.”

But in responses to Crikey this morning, Stephen Rice, the producer on 60 Minutes’ program, said Parry’s claims were “nonsense and demonstrably wrong”.

“All of Bellingcat’s work is based on open source information and geo-location. You can do you it yourself — Robert Parry clearly hasn’t.”

“We stood on the side of the road in Luhansk where Buk 3×2 passed on its way back to Russia the morning after it shot down MH17.

“We opted to do our piece to camera as a wide shot showing the whole road system so the audience could get the layout and see which way the Buk was heading. The background in our piece to camera looks different to the original Buk video simply because it was shot from a different angle. The original video was obviously shot from one of the apartments behind, through the trees — which in in summer were in full leaf.

“Michael Usher is not standing in ‘an open field’, as Parry claims. He is on a patch of grass by the road. The earlier video is not in an ‘overgrown area’; it was simply shot through trees in the foreground.”

Above: Stills from the video and from 60 Minutes intended to demonstrate a location match

Below: The full video of the truck moving past the location 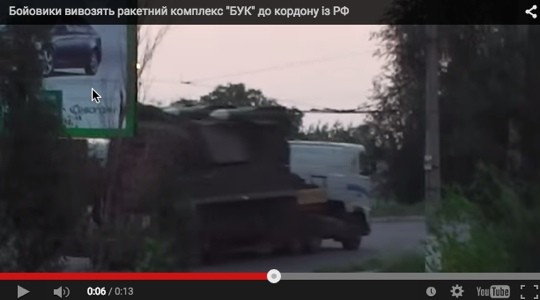 Rice provided Crikey with a broader image of the area in which the program claimed the truck had passed. He also encouraged Crikey to verify the location ourselves using Google Maps. His full response can be read here.

The 60 minutes program is only the latest in a long line of disgraceful misreporting on the shoot down of MH17. There was no BUK missile involved. The radar, satellite and forensic evidence makes it abundantly clear that the culprit was one or two jet fighters of the Ukrainian air force. The Russians demonstrated this on 21 July 2014 although you won’t read that evidence in the Oz media. The Americans know it, as Parry disclosed in several earlier articles, not least from their own satellite data and the two active AEGIS radars operational at that time. The Dutch know it from the forensic examination of the wreckage, including 30mm cannon fire bullet holes in the fuselage. You probably won’t read about the results of their examination because of the agreement signed on 8 August 2014 not to release the results unless all four parties (Netherlands, Belgium, Australia and Ukraine) agreed. You won’t even read about that agreement in the Oz media because of the news blackout on the topic. And that includes Crikey who at least allow comment on the point although running at high speed away from serious investigative reporting.

Bravo James!
The propaganda over this event is unbelievable!
Where is the American satellite data of the event? When they release that and prove their point, I may have a rethink.
I’m NOT holding my breath!!