Media briefs: <em>Tele</em> interviews a juror … Fox gets a new constituency … PVO all day every day …

How the Daily Telegraph was able to interview one of Ivan Milat's jurors. And other media tidbits of the dya.

Tele interviews a former juror. Eyebrows were raised in the Crikey bunker this morning at a report in The Daily Telegraph in which a former juror spoke to the paper about the Ivan Milat trial:

“One of the jurors who convicted backpacker murderer Ivan Milat has revealed they believe Australia’s worst serial killer did not act alone.

“The juror, who approached The Daily Telegraph voluntarily, had no doubts about Milat’s guilt but said it was frustrating to be left with the question — who was Milat’s evil accomplice?

“The juror said they would have liked to add a rider to the 1996 verdicts of guilty to the murders of seven young backpackers in the Belanglo State Forest and kidnapping an eighth tourist.

“’I would have said there was a very strong possibility that someone else was involved,’ the juror said.”

The juror’s identity is not disclosed by the paper. In America, it’s common for jury members to be contacted by the media and given a chance to explain the reasoning behind why they reached a certain verdict. But not so in Australia, where juries are largely left alone.

In most Australian jurisdictions, there are formal prohibitions on both the media and on jury members on speaking publicly about jury deliberations, Griffith University media law expert Mark Pearson told Crikey this morning. But in New South Wales, where the Milat trial took place, the prohibition is only on media contacting the juries.

“Section 68A of the NSW Jury Act says a person shall not solicit information from, or harass a juror or former juror for the purpose of obtaining info on deliberations of a jury,” Pearson said. “The maximum penalty is seven years’ jail. But former jurors can disclose details of their own volition.” This explains why, in the second sentence of its story, the Daily Tele explicitly states it was the juror who approached the Tele, not the other way around. During a trial, section 68B of the act, which governs what juries can say, has a blanket prohibition on jurors speaking to the media without express permission. But after a case is concluded, former jurors in NSW are only prevented from selling their stories for a “fee, gain or reward”.

In 2000, broadcaster John Laws was found guilty of breaching the act when he interviewed a friend who had served on a jury about what she was thinking as she made the decision on a murder trial. It was the first time a journalist had been found guilty of breaching the Jury Act in Australia. Laws narrowly avoid a jail term over the breach, instead being given a 15-month suspended jail sentence. — Myriam Robin

Fox gets a new constituency. US investor ValueAct has boosted its stake in the Murdoch clan’s 21st Century Fox to more than $1.4 billion of B class voting shares after a concerted share buying operation over the past two months.

In a filing with the US Securities and Exchange Commission this morning, ValueAct revealed it had lifted its stake to 43.549 million shares, equal to 5.5% of the B-class voting shares. The purchases this year cost more than US$394 million and built on a stake assembled midway through 2014 worth a US$1 billion. The holding is one of the largest non-Murdoch-clan stakes in the key voting shares of Fox.

Normally, big investors have bought the A-class non-voting shares, but ValueAct has been the biggest buyer in the voting shares the past year. Fox spokespeople said last year ValueAct was a long-term investor, but Bloomberg pointed out in a report last year that ValueAct is an “activist fund” and has used its holdings in companies to change direction and management.

For example, Warren Buffet’s Berkshire Hathaway lifted its stake in Fox’s non-voting shares by 1.5 million to 6.2 million at the end of March, according to a Berkshire Hathaway SEC filing late last week. That’s a minor holding for Berkshire compared with its huge holdings in Coca-Cola, Wells Fargo, IBM and Walmart.

But ValueAct’s CEO, Jeffrey Ubben, was quoted by Reuters in August of last year — after the initial stake was revealed — that he supported Fox’s decision to abandon the multibillion-dollar bid for Time Warner, and to be a “$US50 stock in three years”.

ValueAct, a hedge fund known for taking stakes in companies and quietly affecting change over the long term, does see a possible Time Warner tie-up down the road. — Glenn Dyer

Brandis defends Australia Council funding cuts. Arts Minister George Brandis has defended his plans to take $104.8 million from the Australia Council to establish his own National Programme for Excellence in the Arts, saying that the new program will work to broaden access to arts funding. Speaking to Michael Cathcart on Radio National’s Books and Arts Daily, he said: “The purpose of the policy is to ensure that there’s contestability so that not all arts funding is delivered through the Australia Council. I can’t see for the life of me, in circumstances where there has been no reduction in the amount of money available, what is wrong with there being contestability so there are two funding streams.” — Read Ben Neutze’s full article at the Daily Review.

PVO all day, every day. Sky News has vastly expanded the on-air presence of Oz columnist and political scientist Peter van Onselen, giving him a four-hour daily slot (noon to 4pm) on weekdays. PVO News Day, as the new show will be called, will also feature former NSW premier Kristina Keneally, who’ll have a daily slot at lunchtime. Keneally is a regular guest on Sky News, but has had less of a presence lately, after her show opposite former Liberal politician Ross Cameron was axed by the network last month.

Front page of the day. Right place, right time for the Tele … 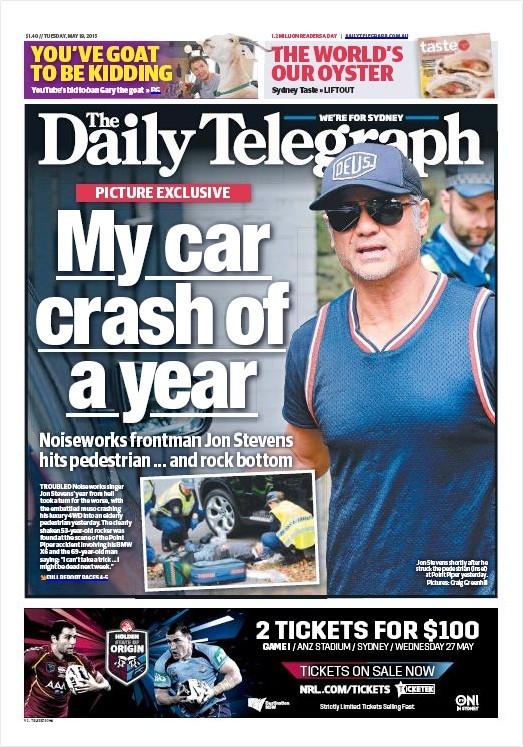 “Milat Sauce” … “Is that the truth – or did you catch it from Limited News?”?