Essential: thumbs up for the budget, but no bounce for the Coalition

Voters like the 2015 budget much more than last year, but don't think they'll benefit and don't think it will help with Australia's "budget emergency", today's Essential Report shows.

Voters like this year’s budget significantly more than the 2014 budget, today’s Essential Report poll reveals, but it hasn’t translated into a voting shift for the government. And they don’t believe it will help address long-term fiscal problems.

But whatever positive sentiment exists about the budget, it hasn’t translated into a voting intention boost for the government. The Coalition is steady on 41%, Labor’s primary vote has increased a point to 40%; the Greens are down a point to 10% for an unchanged two-party preferred outcome of 52%-48%.

And voters are more mixed on the government’s economic credentials. Thirty-four per cent approve of the way the government is handling the federal budget compared to 33% who don’t approve, but that’s still a much better result than after the 2014 budget, when voters split 30%-52%. However, 40% of voters say the economy is headed in the wrong direction, compared to 35% who say it’s headed in the right direction. And that view hasn’t shifted since August, when voters split 35%-41%. And voters were evenly split on whether the budget made them more confident about the capacity of the government to handle the economy, 31% more confident and 31% less confident (31% said it made no difference to their view, as well).

That may be because voters don’t think the budget did enough fiscally. Thirty-seven per cent of voters say the budget “does not do enough  to reduce the deficit”, compared to 18% who disagreed with that statement. On whether the budget favoured business over workers, 47% agreed that it did, compared to 12% who disagreed. Only 20% agreed that this budget fixes the problems of last year’s budget, compared ton 37% who said it didn’t, while 50% agreed “the budget is is more about improving the Government’s popularity than improving the economy” — indeed that statement drew the strongest level of agreement of all. 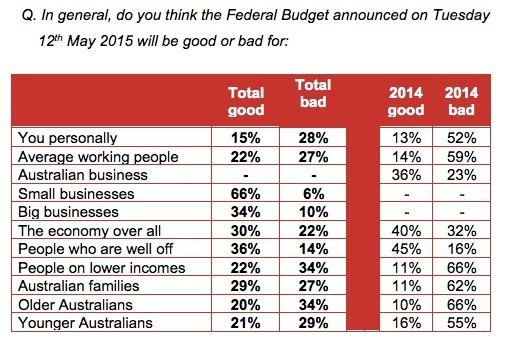 Small business are easily the biggest winners from the budget, according to voters, with 66% saying it was good for small business, including 22% who said it was “very good”. They also thought big business did pretty well. However, few believed they personally would benefit.

Fairfax says BOUNCE. Essential says NO BOUNCE. Therefore inadequate sample numbers , tones of questions asked , and an inability to add up make poll dancing a sport, or an art , rather than a science.

the budget is clearly a short term con job to sucker the voters into thinking abbott has changed course, but if he wins an early election and gets control of the senate then all the nasties that cormann and hockey were celebrating with dancing and big cigars last time will be dragged back out of the conservative closet, after all,its what the lunatic right wing have been dreaming about since howard got the chop.