War on mums, war on China — all part of budget week games

The government's attacks on working mothers this week managed to grab attention when it was hoping all eyes would be focused on small business handouts. 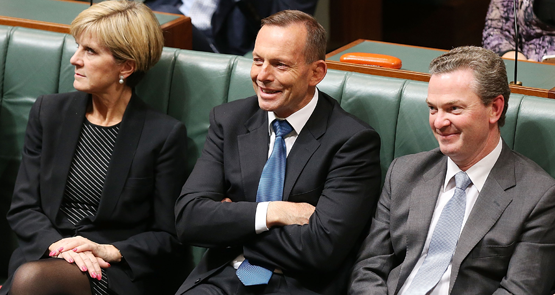 On Monday, after details of the government’s childcare policy were revealed, Crikey gave a big tick to the package but suggested relying on ending what the government called “double dipping” on paid parental leave to fund it was a half-smart solution. In retrospect, Crikey‘s assessment was overly generous. By yesterday, there was nothing at all smart about the humiliation of two ministers whose wives had been revealed to have “double dipped” or, to use Social Services Minister Scott Morrison’s term, “rorted”, or better yet Joe Hockey’s term, committed “fraud” in accessing both their employers’ parental leave schemes and the Commonwealth’s.

As a result, the government artfully managed to make much of the budget week conversation about an attack on working mothers. According to Isentia, “double dipping” has been mentioned over 9000 times in the media since Monday, making it one of the most widely discussed political issues. Both Seven and Nine last night featured lengthy items on ministers Josh Frydenberg and Mathias Cormann being outed as “double dippers”.

Abbott himself helpfully added to the mess this morning by appearing to say the government had backflipped, and the prohibition on double dipping would now only apply to public servants, until his office clarified he’d misheard a journalist’s question. Then again, Abbott hadn’t helped things earlier in the week when, in question time, he denied his ministers had ever talked about rorting or fraud. Education Minister Christopher Pyne, oddly, declined to let Labor table the transcripts where they’d done just that.

Budget week is one of the few moments in the political cycle when voters will actually pay attention to Canberra, meaning the double dipping debacle will probably get more traction than it otherwise would have. On the other hand, at least voters will have heard of the other main feature of the budget, the accelerated depreciation handout to small business, which, as was established within hours of the budget, the entire country expects will be rorted to within an inch of its fiscal life — with ensuing benefits for multinational companies, local retailers and anyone who can make money from an office refit.

Whether it will be enough to put consumers into a better mood and open their wallets will be revealed by economic data in the months to come, but the budget has provided a general sense that we don’t need to be worried about all that debt and deficit stuff the Liberals used to carry on about. We’ve been given permission by the politicians who insist surpluses are in their DNA that we don’t need to be concerned about deficits in the tens of billions of dollars anymore. It might be that permission, more than the Coalition’s silly “have a go” rhetoric (1981 called and wants its Mojo ad jingle back), that gets the fabled animal spirits moving in the economy.

On matters not unrelated to the budget, Abbott was reminded today of how external events can throw a wobble into any political narrative. A Pentagon official overnight told a Congress hearing that the US was dispatching B-1 bombers to Australia along with a significant shift of other military assets into the region to (in part) “back our diplomacy vis-a-vis China on the South China Sea”. B-1s are supersonic long-range heavy bombers, replacements for the B-52 that form the US’ key strategic-bombing arm. They’re a big deal in terms of military threat. Suddenly, the on-again-off-again “pivot to Asia” is back on again. China instantly expressed “extreme concern” about the deployment (of course, if they really were that concerned, they could stop trying to take control of the South China Sea, but that’s another story).

You can bet the “extreme concern” extended to the government. It might have been content for New Zealand’s Prime Minister John Key to announce the return of our troops to Iraq, but for a relatively junior US official to not merely say the US would be deploying strategic bombers here but that they were explicitly aimed at China, was immensely problematic. After what was presumably some furious phone-calling between the PMO, the US Embassy over the road in Yarralumla, and Foggy Bottom and the Pentagon, it was revealed that the official had “misspoke”, that word now used where that marvellous phrase “that statement is no longer operational” was once deployed to such amusing effect. No B-1s were coming Down Under after all. You can bet DFAT let the Chinese embassy know that quick smart.

The budget figures rely heavily on China continuing to grow strongly and completing that long-awaited transition to a more consumption-based, rather than export-based, economy. As Michael Sainsbury explained in Crikey yesterday, there’s more than a little optimism in that outlook. The government also heavily hyped its free trade agreements in the budget, including with China (despite the fact that, for all the pomp and ceremony last year, the one with China hasn’t actually been finalised yet). It’s even wasting $24 million in the budget to educate — or more appropriately perhaps, re-educate — Australian business about how wonderful the FTAs are.

The Chinese finding out that Australia will play Airstrip One to our imperial overlord’s long-range bombers targeting them is probably not the ideal way to maximise Chinese-Australian economic co-operation. No wonder the official was suddenly deemed to have “misspoke”.

One suspects the US official didn’t ‘misspoke’ but announced the additional invasion of Australia by US military merely ahead of time. At the time Gillard approved the US troop presence in the NT it was obvious we’d never get them to leave.

Australia could have been neutral & comparatively safe but our prime ministers (of all colours) appear hellbent on making us a target for the many enemies of the USA.

And since when did “misheard” = misspoke” ….. more than under Abbott?