Consensus at ACU? The new location for the Australian Consensus Centre is yet to be announced, leading academics across the country to wonder if their university’s administration is considering taking $4 million from the government for the project. One tipster has told us that Australian Catholic University is tipped to be the next home for Bjorn Lomborg’s “Australian Consensus”, as it was written in the budget papers. According to our tipster, the centre would suit ACU because, “They are currently in the midst of staffing restructure. Most of the current staff are being made Teaching-only in either a effort to save on staffing costs or to manage them out (or both). The aim of this is to attract higher profile researchers who can bring in the bucks — grants and setting up Research Centres are where the money is in Higher Ed. Lomborg would fit perfectly into this profile.”

Our tipster also noted that vice-chancellor Greg Craven is on good terms with Education Minister Christopher Pyne, who appointed him to chair the government’s review into teacher training standards. ACU has already been linked to the Consensus Centre, with reports saying that its Canberra campus was the originally preferred location, but when we asked ACU if it was considering hosting the centre we were told the uni was “not commenting on it at all”. Well, that’s no fun.

Bernardi a party man? Liberal Senator Cory Bernardi had a win this week, getting the Senate to agree to a six-month inquiry into halal certification of food, as well as kosher foods, organic products and genetically modified foods. But a tipster is wondering whether Bernardi really is still a Liberal Senator. Subscribers to his weekly email newsletter — “your weekly dose of common sense” — got his opinion on the budget on Wednesday, but the way he writes, it seems like Bernardi doesn’t think of himself as being a member of the government at all:

“The motive for this is clear. The government wants entrepreneurs to invest in business assets to spur growth in the economy. This should see jobs rise and economic confidence increase.

“… It also underlines the challenge facing the government. They need to keep spending in check to redress the deficit whilst keeping the economy afloat.

“As I mentioned last week, I expect that some very strong economic headwinds will hit the global economy in the years to come. In the circumstances I envisage it won’t be government that will be keeping the economy strong, the heavy lifting will be done by the private sector.

“That means we need a legislative agenda that supports small business. Last night’s budget goes some way to doing exactly that.”

Bernardi’s Twitter bio also lists him as “Conservative Senator for South Australia” with no mention of the Liberal Party. We know he’s been on the outer for quite a while, since he was forced to resign as parliamentary secretary in 2012 after linking same-sex marriage with beastiality. We called his office to ask if Bernardi does still think of himself as part of the government, but didn’t hear back by deadline.

Turnbull staffer charged. A staffer for Communications Minister Malcolm Turnbull faced the ACT Magistrates Court this morning on charges of public indecency. Adviser Stephen Ellis was charged yesterday with committing an act of indecency and indecent exposure at Canberra airport. The court also heard that he was allegedly in possession of amphetamines and LSD. He was granted bail, and the matter was adjourned until June 5.

Google can’t navigate like a local. A caller to 3AW this morning says that while mapping in Gippsland, Google’s car got bogged recently. The caller wasn’t more specific, but we hope that if the Google car was in East Gippsland the tech giant called Motoring Enthusiast Senator Ricky Muir to help out. We’re sure he knows exactly what to do in that situation.

Keep holding on. This week it has been reported that right up until the announcement of his new party yesterday, Senator Glenn Lazarus had been uploading Palmer United Party press releases to his own website. He’s not the only one to struggle to update his website — a tipster pointed out that Adam Bandt’s website still has the Greens MP listed as the deputy leader of the party.

Headline of the day. The battle between Barnaby Joyce and Johnny Depp’s dogs has garnered a ridiculous amount of media attention in the last 24 hours. They’ve got less than 24 hours to get out of the country or face being put down, so we’re sure there will be a live blog soon. But we must give credit to The Australian, which had by far the best headline for their coverage:

Milking it. In an interview with BuzzFeed yesterday, new Greens leader Richard Di Natale continued to position himself as a mainstream, normal guy by saying he has no time for raw milk advocates and anti-vaxxers. Di Natale told BuzzFeed, “Raw milk is complicated in that the risk increases the further away from the supply chain you are, but I absolutely wouldn’t drink raw milk and I wouldn’t give my kids raw milk.” He also said he wasn’t afraid of losing votes over it.

“I want us to be a party that supports science and evidence, and the policies I put forward will do that. There will be some members who have very strong positions against vaccination and will be re-assessing if the Greens are the party for them, and I know some have already done that.”

People reconsidering their positions may be a little closer to home, with the South Australian Greens pledging to support people who want to drink raw milk at the start of this week. Mark Parnell, South Australian Greens MLC, said in a release earlier this week that the Greens in that state would be working to overturn the criminalisation of raw milk cow-share schemes in that state. “The Greens were highly critical of the State Government’s crusade against food choice.  Rather than prosecuting the dairy owners,  the Government should have worked with the dairy and with consumers to bring this industry within the regulatory framework.”

It’s all in the timing. Last night as Bill Shorten got to the end of his budget speech, a tipster was surprised to see this tweet pop up from the Australian Treasury account. Pure coincidence, we’re sure. 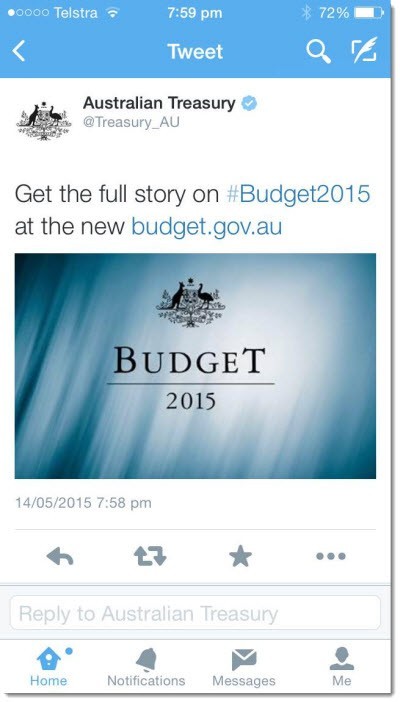 *Heard anything that might interest Crikey? Send your tips to[email protected] or use ourguaranteed anonymous form.

Reckon The Oz isn’t just “making a stand” beside their Limited News Party’s Cousin Jethro?
How vocal were they when Equine Influenza found it’s way into the country under who’s watch…..?

And of course, Lomborg’s Consensus Centre would suit the Catholics as they do have a somewhat long tradition of maintaining belief and dogma, despite a huge array of contrary evidence.

As W.A. University’s brain-dead ‘academic’ mafia threw out an excellent endowment, surely the only real surprise would be if there’s only one University vying for Bjorn Lomborg’s “Australian Consensus” Foundation?

No Norm, most unis recognise that this so-called Consensus Centre is toxic to genuine academic discourse.

Sadly Chris, most so-called universities nowadays lack the intellectual levels once prerequisites for students and staff; the higher level background in higher level language, logic and scientific method once an essential part of even many B.As; and any meaningful awareness of inherent dangers arising from our species evolved emotive drives.
What more astute members of our ‘university’ powerbrokers and their followers DO recognise however is the threat posed by any talented academics such as Bjorn Lomborg.