The children of Gaza need more than aid

Yes, the situation in Gaza is grim and its people need food and shelter. But they also need a reason to believe in hope for the future, write Majed Abusalama, national leader of Students for Justice in Palestine in Norway, and James Rose, founder of The Kick Project. 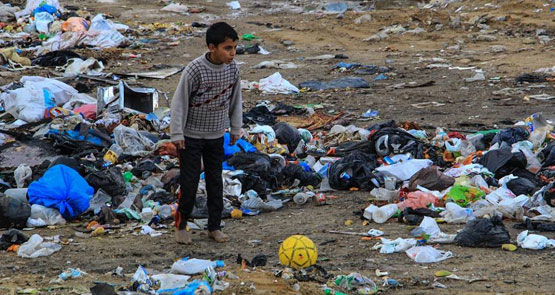 It’s another long day dawning in Jabalia Camp in Gaza. Today many among the 100,000 or so living here will wake and attempt to get to school, hunt for work, deal with health issues and perhaps consider whether running the gauntlet of the Israeli blockade — whether it be for food, medicine or work — is worth it today. This sounds hard, and it is. But here in Gaza, people will also hug their children, pat a stray cat or share a joke with a neighbour.

Yet, Palestinians are portrayed endlessly as victims. Worse, Palestinians are seen as morose and angry, railing at the world, pleading for help, constantly in crisis and desperation, and in need of a constant supply of foreign aid.

Aid delivery is, of course, something of a moot point in Palestine. Since the Israeli bombardment in July-August last year, the world pledged $5.4 billion in aid and reconstruction in Gaza. Only about a quarter of that has actually been transferred, and even less has actually arrived and been put to work inside Gaza.

Up to 85% of steel and other metals vital for reconstruction are being held and denied entry by Israeli authorities. No concrete has been able to get into Gaza for months. No housing materials during the bleak winter months meant that many were in scanty shelters or none at all. People have frozen, including children. Hospitals and schools remain piles of rubble.

Tony Laurence, CEO of the UK-based Medical Aid for Palestinians, concludes that “with the blockade in place we are just reconstructing a life of misery, poverty and despair”.

Aid has to squeeze through the needle eye of the joint Israeli-Egyptian blockade. These countries bombed most of the tunnels through which Palestinians were bringing medicine, food and most vital materials into Gaza during the last eight years of the blockade.

Donors have raised concerns about corruption and about how the funds will be dispersed inside the blockaded strip, as the EU has recently suggested. But these complaints are often just cover designed to divert from the actual truth, which is that Israeli and Egyptian intransigence is ensuring aid is not fully delivered and that few are prepared to do anything about it.

Palestinians are grateful for aid. Shelter, food, healthcare is valuable. But while crisis aid provides for life, something is lacking. It is a right to live as well as to be kept alive.

And it is the children Palestinians are often thinking of. All want their children to experience something like a proper childhood, with all the fun and joy this means. Gaza is full of children. Approximately two-thirds of Gaza’s population are under 24. According to UNICEF, approximately 500 children were killed in the period of the latest Israeli bombing, around 3000 were wounded, and an estimated 370,000-plus children are in need of “immediate psychosocial first-aid” as a result of this event alone.

Some 500,000 Palestinians, including children, many of whom were already living in “permanent” refugee camps, have been displaced during the conflict. Most remain homeless.

Children look tired and anxious. But, they are quick to laugh and always ready to spring into life when a game is on. This is an energy we cannot ignore, especially as food and shelter are scarce, as violence simmers and everything seems lost.

It is the energy of these children that will drive tomorrow’s Gaza, or Syria, or Afghanistan or Iraq. Feeding and housing them is vital. But failing to allow them a childhood is a crime against our collective future. Shaping aid in crisis goods and in units of care and not in the delivery of love and joy our children need is a false economy.

What aid that comes should come with this in mind.

Gaza is not alone. Late last year, UNICEF’s chief of child protection Susan Bissell said “We are saying at present, though I suspect this is an underestimation, that about 1 billion children live in countries and territories affected by conflict.”

“It sort of feels like the world is falling apart for children.” she added.

For Gazans, the present is bleak but the future is always full of possibility. We can thank those who are able to give aid and assistance. But don’t forget Palestinians are human and all have human needs beyond mere existence. And most importantly, Palestinian children have a right to a safe and loving childhood.

What about the kids? Are lockdowns and the virus debilitating the nation’s young?

Scott Morrison wants kids to just be kids? Not in this climate.

They also need quality leadership, which is sorely lacking. But you get who you vote for.
The Palestinian people have constantly elected rubbish leaders who are more interested in holding onto power than generally helping their people. Electing HAMAS in Gaza in 2007? Seriously? How will that help your cause? It is no surprise there hasn’t been a general election in Gaza since then…
Ultimately, the only way things will improve is an agreement with Israel, endorsed by the US. Until that happens, things will stay the same. Electing HAMAS set back that goal by a generation.
One can only hope that the next generation realise this underlying fact and elect leaders who can help get them there. Otherwise, I will be commenting on a similar post, saying the same thing, in 2050.