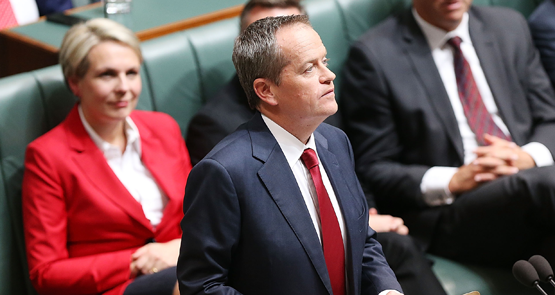 It was somewhat disconcerting to see an opposition leader actually revealing policy in his budget reply speech. It wasn’t just Tony Abbott who made the Thursday after the budget a policy vacuum — he was merely honouring a long tradition of treating the budget reply more as a 30-minute abuse session than any sort of alternative budget. And if a certain vagueness pervaded Shorten’s offerings in some areas — coding (“the literacy of the 21st century”) to be a national educational priority, an aspirational goal of 25% tax for small business — other areas were clearer, especially around providing an incentive for study in science, technology, engineering and maths degrees and education degrees, and trying to encourage small business and start-up innovation through leveraging venture capitalist investment and part loan guarantees.

As a vision, it actually hangs together better than what passed for the vision of Tuesday night. Vision is much easier in opposition than in government, of course, but Shorten’s vision went beyond trying to jumpstart the economy through small business handouts and telling everyone to “have a go” to identifying areas where Australia need to have a lot more of a go. What he has to do now is repeat it about 12,000 times between now and the next election, so it starts to cut through with voters.

And it’s all unfunded, of course, as the Prime Minister was quick to point out. The problem for Abbott is that 10% of all of his spending this year is unfunded as well, forcing him to borrow $41 billion to pay for $415 billion in spending. Moreover, Shorten has announced two tax policies aimed at multinationals and what will soon be the $50 billion a year super tax concession rort, to government derision. Result: on the one hand Abbott attacks Shorten for identifying ways to fund government spending, on the other hand he attacks Shorten for not identifying was to fund government spending.

Not, of course, that Abbott is any different to any of his predecessors in that hypocritical regard.

If education is a traditional Labor area where Shorten will feel comfortable — particularly given Christopher Pyne’s ineptitude in that portfolio — and small business is a traditional Liberal heartland that Shorten is anxious to neutralise after Tuesday’s “free money for everyone” giveaway, infrastructure is a more contested space that Tony Abbott has sought and failed to make his own, with the “infrastructure Prime Minister’s” second budget containing no worthwhile new infrastructure investment outside a northern Australia boondoggle fund. But Shorten’s proposal to make Infrastructure Australia yet more independent, even comparing it to the Reserve Bank, deserves some scepticism.

Exactly what role IA would have as a kind of central bank of capital investment isn’t clear, beyond that it would be completely independent of government. Labor says it will not merely assess projects but “facilitate new major infrastructure projects. It will work with the states and private sector financiers, super funds and constructors to broker deals, get more projects underway, get them financed and have them delivered.” Does that mean the Commonwealth is taking over all infrastructure projects it funds? And will IA control infrastructure funding completely, so that no politician can get their mitts on the money and redirect it to regional rorts or duds favoured for partisan reasons, like the East West Link?

All oppositions like to say that they’ll introduce greater rigour to infrastructure investment because the government of the day is selecting projects for political purposes. It’s easy to commit to independence when you’re not in government; once you’re there, suddenly the idea of politicians and tame bureaucrats picking projects becomes a lot more appealing. A Reserve Bank-style body that would be open about its assessment of infrastructure needs and the role of infrastructure in economic growth, and the costs and benefits of individual projects, would be a welcome strengthening of public debate, especially given IA has just basically wasted 18 months while the government fiddles around with its governance.

Independent bodies can embarrass and contradict governments without fear, which is why governments don’t like them, although they recognise that there are some areas that are too important (monetary policy), or too controversial (media regulation) for politicians to be involved. But increasingly politicians also see independent bodies as a way to do what they themselves are increasingly unable to do — sell reform. The Rudd and Gillard governments took to asking the Productivity Commission to examine sensitive policy areas, like disability services and aged care, as a prelude to undertaking the reform recommendations that resulted, knowing that the PC’s rigour and crediblity would make it harder for their opponents to attack. The Abbott government has started doing the same: the PC is currently looking at industrial relations laws as cover for a reform process and has already examined child care.

What this does is hand to independent experts (who are themselves heavily shaped by particular economic ideologies) the role of establishing in the public mind the case for reform — a task that used to be considered part and parcel of political craft. But our every more professionalised political class finds itself ever less capable of explaining complex reform in a contested and hyper-partisan environment.

I have as much faith in Bill Shorten to do something useful rather than be a politician at our expense, as I do in Tony Abbott.

Bernard, if you genuinely believe “Bill Shorten’s budget reply offered some coherent vision”, I’d suggest you don’t give up your day job to become an optometrist.

Definitely a game of the evil of two lessers. Meanwhile the far better Green option is quietly doing hard yakka in the Senate to make the evil slightly less dire.

Or in this case the lesser of two weavils (with apologies to Patrick O’Brian).