The Abbott government will not merely return Australia to the high-taxing years of the Howard government, it will exceed the Whitlam government in its spending. 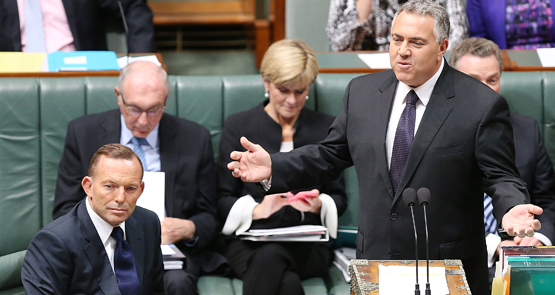 It was a small example of how no one bothers to take question time even faintly seriously any more: the Prime Minister told an absolute whopper of a lie yesterday in response to a budget question, and no one batted an eyelid.

Shadow Treasurer Chris Bowen referred to Abbott’s 2013 commitment that “there will be no overall increase in the tax burden whatsoever” and asked “why is the government increasing tax as a percentage of the economy every year under this budget?”

Abbott’s response to Bowen? “We are reducing tax by some $5.4 billion,” he began. “But it is interesting, is it not, that members opposite are obsessed by the tax burden  — because they live on ‘planet tax’. That is where they live; they all live on ‘planet tax’. There is their carbon tax; there is their mining tax; there are all the superannuation taxes that they inflicted in government and that they want to inflict again on the retirees of Australia; and then there is the Leader of the Opposition’s own special tax — the piggy bank tax.” On he went, attacking Labor.

If the government was indeed intending to reduce tax by $5.4 billion in 2015-16, it would be looking at a deficit of nearly $50 billion, not $35 billion. Instead, taxes will go up by just under $19 billion next year — well ahead of inflation, which is why the proportion of tax:GDP rises. Maybe Abbott was referring to the government’s small business tax package — except the budget overview (you don’t even have to go into the budget papers themselves) says the tax cut component of that will be $5 billion. What’s the $5.4 billion? It’s unclear — and Abbott didn’t use the figure again for the rest of question time. Let’s put it down to confusion on the Prime Minister’s part. What’s $400 million between friends, anyway?

But it’s no wonder that Abbott was eager to miss Bowen’s point. It’s not merely that the Coalition will steadily increase the tax burden on the economy over the next four years, it’s that the Coalition has done this for a long time. Consider the level of tax to GDP over the last 25 years starting in 1990-01. 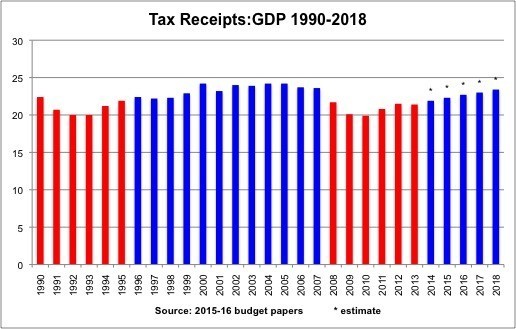 Welcome to Planet Tax, busily being terraformed by Joe Hockey. But the higher burden of taxation in coming years won’t even return us to the level of taxation imposed by John Howard and Peter Costello, who presumably resided in their own tax solar system.

But Abbott and Hockey propose to go one better than Howard and Costello. Despite his enthusiasm for spending nearly all the additional revenue that rolled in beyond Treasury’s forecasts, Peter Costello still kept Commonwealth spending relatively in check as a proportion of GDP. 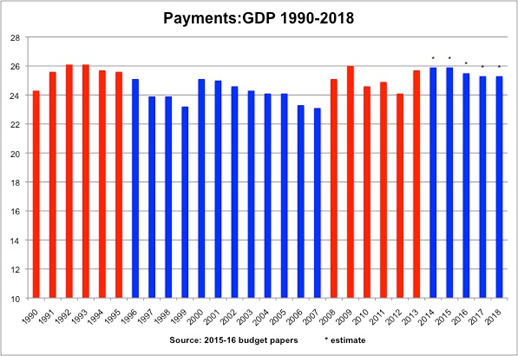 So the single most sustained period of high spending since the Keating government’s efforts to handle the recession of the early 1990s starts this financial year and is scheduled to last until 2019. Moreover, unlike Costello, who delivered surpluses, the Abbott-era Liberals will preside over years of deficits.

By way of comparison, the Whitlam government — supposedly the paragon of big-spending irresponsible government — only ever spent a maximum 24.3% of GDP, in its final budget. Abbott government will spend a significantly greater proportion than Gough’s government every single year.

The effect will be that the Liberals will become not merely the party of high taxes, the party in whose DNA lies the urge to significantly lift the proportion of the economy being taken by the taxwoman, but the party of big spending as well, whose enthusiasm for expenditure exceeds even the supposed exemplar of big government.

The second-highest year of spending under Whitlam was 1974-75, when spending was 21.7% of GDP. The question is, will Australians ever see spending at that level of GDP again? For all the Liberals’ rhetoric about small government, if they remain in office it seems we never will.

No budget emergency. What? Can I stop paying the ‘Temporary Budget Repair Levy’ then?

Lies? Toad’s Haul? Get a bigger bag.
[“Crisis? What crisis?”]
When it comes to saving Toad’s bacon and having a good time (his own “Age of entitlement” :-
“Battlelines promo expenses”
“Weddings, parties, anything”
“poli-pedal out of pocket expenses”?)
other people’s money is no object?

After all the Abbott/LNP rhetoric it’s almost difficult to stare at the Tax Receipts graph and realise you are looking at reality .. Abbott should be forced to stand in front of the graph as he carries on about Labor being a high-taxing party … that might persuade Abbott to put aside the propaganda megaphone …

The other graph that startled me recently was a graph of world leading economies debt as a proportion of GDP … Australia looked incredibly low on that graph compared to USA and Japan and some European countries … seems to me Labor brought Australia through the GFC exceptionally well … of course, there was some pump-priming expenditure … but it was very necessary … mind you, another reality defying stance of the LNP when in opposition was the complete silence about the GFC … what GFC? what budget crisis? etc etc …

He’s safe,, he knows he’s safe.
It’s not as though his hypocrisy is going to picked up, exposed and torn apart by Limited News, with their share of the “exposure market”?