Delimiter founder Renay LeMay is hopeful of raising $25k to fund a book on Australia's tech policy failures. And other media tidbits of the day.

Delimiter out of cold storage? Tech journo-turned-policy adviser Renai LeMay could soon be back to annoying Malcolm Turnbull, having launched a Kickstarter two days ago to fund a new book and revive Delimiter. The tech website, which stopped posting new content last year, had a devoted following, and LeMay, its founder and principal writer, gained a reputation as one of Australia’s most critical and knowledgable tech journos.

The book‘s working title is The Frustrated State, and it’ll focus “on how Australia’s political sector is systematically mismanaging technological change and crushing hopes that the nation will ever take its rightful place globally as a digital powerhouse and home of innovation,” while also suggesting some solutions.

LeMay is nearly halfway to his $25,000 goal ($12,000 funded when we last checked), so looks likely to easily make it. But he told Crikey that while he’s cautiously optimistic, he’s not counting his chooks yet. If the project doesn’t reach its goal, he notes, he won’t get anything (that’s the way Kickstarter works). “I will need to continue the project’s momentum over the next month to hit my goal. I don’t want to get close and fail,” he said.

The $25,000 is what he reckons he needs to write and publish the book on a break-even basis through a self-publishing house. He’d fund Delimiter separately.

“If the Kickstarter is successful, I would also seek to formally work with a larger publishing house for the publication and distribution of the book, which may change the economics,” he said. “But I can’t count on that — I’m putting all my eggs in the Kickstarter basket. If the Kickstarter doesn’t proceed, the book most likely will not go ahead.”

LeMay’s book won’t cover his time working on contract for Senator Scott Ludlam, he said, but as a sweetener, LeMay will seek to become accredited by the press gallery to work on Delimiter as he writes the book. The tech policy website was put in cold storage around a year ago, with LeMay describing its closure as a “natural end” — writing the website while working for Ludlam on policy, he said, would comprise a conflict of interest. — Myriam Robin

MJA crisis rolls on. Several Medical Journal of Australia reviewers, readers and AMA members have this morning launched the Friends of the MJA, a group committed to fighting plans to outsource the medical journal’s production to Elsevier.

A fortnight ago, Crikey covered the spectacular fallout over the decision, during which the journal’s editor-in-chief was sacked and two other editors resigned. Prominent members of the medical community were quick to voice their opposition to the decision, as well as to the manner it was carried out. The AMA, which owns the company that publishes the journal, was quick to try to allay member’s fears, writing that the MJA needed to make the change to be meet its costs. Publishing the journal takes up 16% of the AMA’s budget.

“Our primary aim is to ensure that as many doctors as possible are fully aware of the facts surrounding the current “crisis” at the MJA. On this website you will find every publicly available document (both pro and con) that seeks to explain the crisis and how and why it has arisen. If and when more information becomes available, it will be added to our website.

“Our secondary aim is to allow supporters/ readers/ contributors and reviewers for the MJA to indicate their views as to how the crisis should best be resolved.”

Words you can eat. While one publication turns to Kickstarter, another turns to hospitality. Restaurant and bar guide Broadsheet will next month operate a restaurant in Melbourne.

“For eight weeks this winter, The Broadsheet Restaurant will serve breakfast through to dinner and drinks into the night, 7am to 1am,” the website told readers yesterday. The restaurant will open on June 5 and appears to be a collaboration between the publisher and many of those in hospitality it’s written about.

“Working with our favourite cafes, restaurants, bars and coffee roasters, we’re bringing you a restaurant experience that combines everything we love about dining in this city.

“We’ve assembled a team of collaborators who are working to ensure that every element of the restaurant, from the interior to the furniture, the early-morning pastries to the late-night cocktails, represents the very best of Melbourne in one place.”

Godwinning Goebbels. You want Godwin, you got it. The cliche of bringing Hitler into the argument is never likely to be bettered than by Nigel Jones, in this review of a new life of Goebbels, published in The Spectator in early May:

“It is ironic that this weighty biography of Hitler’s evil genius of a propaganda minister is published on the day of a general election filled with Joseph Goebbels’s hallmarks: mendacity, media manipulation and the big lie.”

Yes, that’s right. having read 900 pages devoted to the man at the centre of Nazism, World War II and the Holocaust, Jones has concluded that it was not greatly different in type … to the 2015 UK general election. Man, that is great Godwinning, he really got the spirit of that book. — Guy Rundle

Front page of the day. The Herald Sun has launched a campaign to halt Victoria’s  domestic violence crisis. The paper doesn’t appear to advocate any particular policy response, but has called on readers to #TakeAStand. The hashtag was trending in Melbourne this morning .. 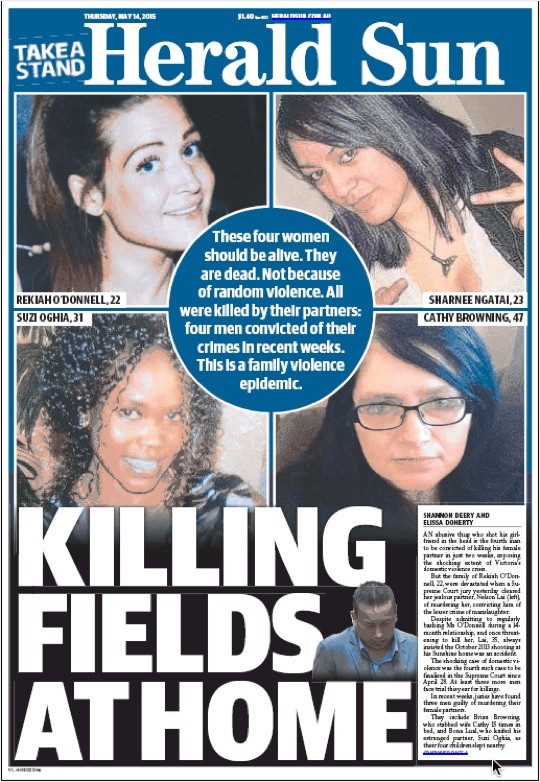 Park that thought … is Don, is dead … credit where it’s due, please

THanks for the Kickstarter pointer.