Govt to unemployed: get a job, ya bum, even if there are none

Why is the government so opposed to public-sector employment? Policy analysts and Governomics authors Ian McAuley and Miriam Lyons examine the government's myopia. 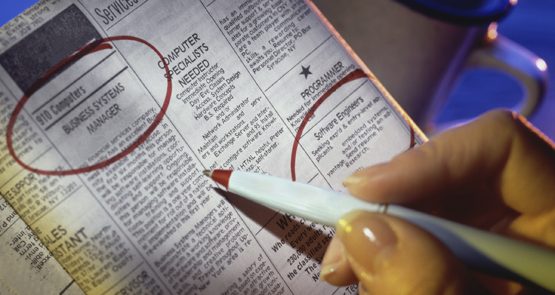 The budget throws some extra cash in the direction of early childhood education and care. But the changes are funded on a shoestring, mainly through re-allocations within the social security and welfare appropriation, and they seem to be focused more on labour force participation than on the needs of children and their parents. They are designed to “change the economics of going to work”, according to Tony Abbott.

In fact, Australia’s workforce participation, at 76%, is already well above the OECD average of 71% — higher than America’s 73%, but below the levels found in northern European countries, most notably the Scandinavian countries.

As Andrew Scott points out in his work Northern Lights, in the Scandinavian countries the policy emphasis is about lifting children out of poverty and making a strong public investment in early childhood education and care. State-provided care certainly helps parents participate in the workforce, but that is more a fortuitous byproduct than an end in itself. We seem to be putting the priorities other way around.

The government has sensibly dropped its punitive six-month waiting period for young people seeking Newstart, and has committed $330 million to help young job-seekers, but these measures still fall short of labour market programs based on continuity of income and intense re-training, such as in Denmark, where labour force participation stands at 78%.

If the economy were overheating, with high inflation and widespread labour shortages, a policy to encourage workforce participation would make sense, but that is not Australia’s situation; the budget papers forecast inflation to be less than 3% and unemployment to remain above 6% for thenext two years. Is the real purpose behind the push for higher participation about using supply-side pressure on the labour market, so as to reduce wages?

While the budget itself provides a mild stimulus (2.1% of GDP), it will do little to generate employment opportunities. Its “smaller government reform agenda” (to use the Finance Minister Mathias Cormann’s term) seems to be based on faith that the private sector will step in where the government is retreating, but even if there is some private-sector stimulus, it’s hard to see it leading to a surge in private-sector employment. Small businesses do not take on new staff just because their tax bill has fallen a little.

Practically, the small government agenda results in immense pressure on state governments, which happen to be major employers, and which face growing demand for their services. About half of their expenditure is on health and education — human services that are intrinsically labour-intensive (and major employers of women). But in spite of increasing pressure on hospitals, and the need to implement the Gonski school-funding reforms, the Commonwealth is not backing down from its $80 billion cuts to state health and education funding.

Is the Coalition unable to see its own policy contradiction — encouraging people to seek work while closing employment opportunities — presumably because the public sector is not seen as a worthwhile employer? Do they see public-sector jobs as make-work, believing that real wealth-creating jobs are to be found only in the private sector? That may sound absurd to any teacher, nurse or police officer on the public payroll, but the statement “businesses and individuals — not government — are the true creators of wealth and employment” is written into the Liberal Party’s platform.

As we point out in our work Governomics, “the division between the private and public sectors need not be based on blind ideology favouring one sector over the other, but rather on a realistic and logical division of functions”. Perhaps the government has forgotten, or has never understood, that our prosperity rests on a joint venture between markets and government.

Government action is needed to make rental accommodation cheaper. If the jobseeker has to pay extortionate bond and rent in a distant location, s/he will be that much less willing to leave their comfort zone. For youngsters it is scary, for families it must seem impossible.

Is the real purpose behind the push for higher participation about using supply-side pressure on the labour market, so as to reduce wages? That’s the only way that this Government’s push to increase the participation rate makes sense.

Certainly, it is a good thing to remove barriers to full participation that operate against some groups, including women with young children, older workers (not just 65+ but 45+), those with disabilities and so forth. But by and large, we have plenty of workers and an economy that can only supply jobs for 95% of them in a very good year – more like 85% if you consider underemployment – and this won’t be changing any time soon.

Jobs are the priority, not participation.

Is the real purpose behind the push for higher participation about using supply-side pressure on the labour market, so as to reduce wages?

Nope, that was the purpose of a decade’s worth of record immigration.

That’s the only way that this Government’s push to increase the participation rate makes sense.

The only interest this Government has in increasing participation is that it makes it easier for them to demonise the unemployed and cut back on welfare.

drsmithy is right, i’d go further and say all talk of increasing participation is solely rationalisations for cutting welfare. Cutting public sector jobs is integral to their wish to shrink the State down to just those sectors that corporates can’t profit from, and so what if some poor people get poorer or are ‘underserviced’ (e.g. die on the hallway trolley in the zone3 hospital) in the meanwhile.

What’s new?
This time it’s “Leaners (who can’t get a job, because there are so few of them) – let’s cut them out for special attention”?
Last week it was “certain mothers”?
[Look at their history (no need to go far, the latest a day or two ago), as with “double-dipping-rorter-mums” – this is just another ruse to paint a gold-brick target on a the backs of a minority in the community, for the purposes of selling another of their ultimate solution policies?]
“Leaner and Meaner Limited News Party Government Vilification/Scapegoating Policy?