Abbott's claim to be a true supporter of large-scale public infrastructure is questionable, as projects like the northern Australia "infrastructure pipeline" could turn out to be little more than pipe dreams. 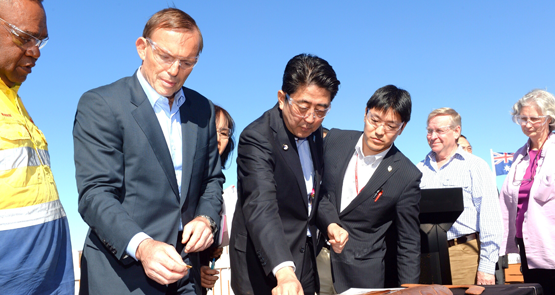 Tony Abbott may be the Infrastructure Prime Minister, but his devotion doesn’t exactly leap out of the meaty parts of this year’s budget papers. Although there’s a lot of hyperventilation about the “$50 billion infrastructure commitment” from last year, that’s spread over a long period of time (up to 2019-20) and a lot of that wasn’t new funding anyway.

The government helpfully provided a list of infrastructure projects funded in each state; less helpfully, it neglected to indicate which of those represented new spending, and which were already underway.

That said, there is some new spending planned.

All roads lead to Darwin — or they might, at least, once the government’s proposed Northern Australia Infrastructure Facility is up and running. The value of this is advertised in the budget papers at $5 billion, or, further into the budget papers, at “up to $5 billion” to be spent on “ports, railways, pipelines and electricity generation”. But it’s not quite that simple. The facility won’t spend money directly on infrastructure; it will offer cheap loans to private enterprises to invest in projects.

In a related measure, the government also announced that it will develop an “infrastructure pipeline” for projects in the north of the country, that will be “informed” by Infrastructure Australia, although the precise mechanism by which Infrastructure Australia’s priorities will be turned into this “pipeline” is left to the imagination. A little over $100 million will be spent on improving roads to help cattle farmers in northern Australia.

All this is part of the government’s new emphasis on development on northern Australia, the exact dimensions of which are supposed to become clearer with the release of the White Paper on Northern Australian development, due relatively soon. Northern Australia has seen some of the most wasteful infrastructure spending in Australian history — it probably would have been more cost-effective to buy a herd of actual white elephants to transport people along the route that was eventually covered by the Howard government’s Alice Springs to Darwin railway — so it will be interesting to see how rigorously the infrastructure pipeline process assesses the projects that will receive concessional loans from the government.

In 2015-16, the government will give states and territories $6.8 billion to spend on infrastructure. This will jump up to $9.2 billion the year after and dwindle to $4.8 billion in 2018-19. Road spending is the largest part of this, with the government’s known antipathy to rail manifest in a miniscule $17 million spend on railways in 2018-19 via the Infrastructure Investment Program.

The Western Australian government, has, as advertised, successfully whined its way into a one-off $500 million payment for unspecified infrastructure projects. (Western Australia’s share of the GST pool has fallen quite dramatically, but budget forecasts that take into account forecasts for iron ore royalties show that WA’s share of the GST will increase from the next budget on.)

Funding for the East West Link in Victoria has been put on ice, but since “the government considers this an important project of national significance”, the $3 billion that the federal government had committed to the project will be listed as a contingent liability, should some future Victorian government take leave of its senses and decide to build the thing. Meanwhile, funding destined for the Victorian Regional Rail Link has been dumped and redistributed to road projects, including the Princes Highway and the Western Highway.

A “Stronger Communities” program (which may win the dubious prize of blandest program name in the 2015 budget) will spend $45 million over two years on small-scale infrastructure.

In addition to being — indeed, perhaps because it is — the least charismatic word in the English language, “infrastructure” is the modern politician’s favourite noun. By my count, it appears 72 times in this year’s Budget Paper No 1 alone. But it pays to look closely: big numbers on the top of media releases are rarely a good indication of what’s actually being spent.

As much as he is the PM for indigenous affairs and women – but he does seem to have trouble with walking backwards and flapping gums?

We’re told that Governments have spent poorly in the past on infrastructure, and when we look at past fiascos such as the Building Revolution in Education and Pink Batts it’s hard to disagree.
It’s amusing, however, to see the writer then complaining, “The facility won’t spend money directly on infrastructure; it will offer cheap loans to private enterprises to invest in projects.” They could hardly handle it any worse than did the previous Governments.

ROTFL Line of the day.

Nothing like the ignorant Norman again. I worked in a BER school. Not one of us will say what we got was bad. I bloody loved it. The federal govt had until then not spent one cent on my school in living memory, and the coalition had spent nothing for 50 odd years. Get the facts not the News Ltd. As to the pink batts, 1. the deaths were within the normal range for the year and in every year of LNP government building industry deaths rise. 2. Many many people have much lower energy bills AH! Maxima mea culpa! The right done want the plebs to have lower energy bills It interferes with coal profit.
Abbott would not know decent infrastructure if it bit his arse. I can tell you from 60 years in regional Australia the ALP is much more help in this area than the LNP, unless the road to the local MPs property needs sealing, or he lives in a moblie phone blackspot.

Sorry I did not mean to say the ignorant Norman. There is a missing comma. The ignorant, Norman was intended. Really the LNP is crap on infrastructure for my whole life. Howard had a glorious opportunity to modernise Australia and he pissed the money against the wall.