A deeply unfair budget for our Asian neighbours

When Hockey and Abbott talked up this budget of "fairness", they neglected to mention the fiscal kindness wouldn't extend beyond Australian borders -- well, except to Cambodia. 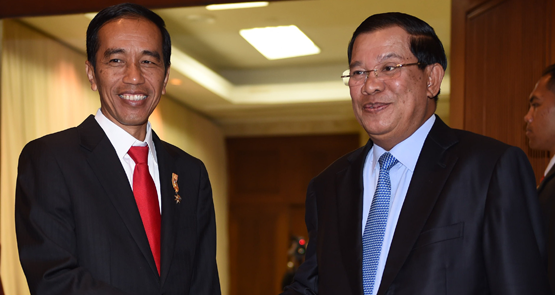 Despite a record $1 billion cut in international aid, the Abbott government has spared its partner in crime, Cambodia, alone in south-east Asia, from an swingeing, across-the-board 40% cut to the what is officially termed “overseas development assistance”. This will effectively hand an extra $20 million to ruthless dictator Hun Sen, increasing his bribe to take refugees from the Nauru detention camp under a sweetheart deal to a minimum of $60 million.

Had Cambodia joined Indonesia, the Philippines, Laos, Vietnam and Myanmar as a victim of the largest aid cuts in Australian history, it would have had a reduction of about $20 million from its $54 million aid package.

In the meantime, Cambodia’s neighbours and other ASEAN nations will have programs — designed to help tens of thousands of people live longer, live better, and have better opportunities via education — cancelled mid-way through their implementation.

As Australian National University Professor Stephen Howes notes, if incremental cuts have to be made, they can be done by simply not renewing programs, minimising their effect. This is not so with an unprecedented cut of this size.

Cambodia, which has yet to take any refugees under the contentious and controversial cash-for-refuges deal, was promised $40 million for its co-operation in taking refugees by the Australian government, despite the fact it does not have enough jobs for its own citizens — who largely live in poverty with almost zero access to health care and social services. Yet even now, despite months of promises by the Immigration Department that this will be happening soon, not one refugee has made the journey from Nauru, the bribes on both sides are mounting.

Foreign Minister Julie Bishop — who had the $1 billion aid cut forced upon her as part of the Mid Year Financial and Economic Outlook — has had to make the tough calls no domestic minister was asked to make. The Abbott government has now carved $11.3 billion from mainly forward estimates of the aid budget, another broken election promise. At the same time, the total costs of detention and compliance-related programs for asylum seekers who arrived in Australia by boat will be $2.30 billion in 2015-16.

Australian Churches Refugees Taskforce executive director Misha Coleman said, “using the latest figures from the Department of Immigration, which say there are 1707 people locked up in Nauru and Manus Island, this equates to a cost of $475,000 per asylum seeker per year”. The estimated costs also appear to have blown out. This time last year, offshore processing was supposed to cost $827 million, but the price tag has come in at $913 million, according to the budget papers.

Rather than doing the hard yards on trimming Australia’s bloated public service, the Abbott government has opted for its spineless policy of “fairness” — to Australians only, we now know — in the desperate hope of winning an election. (For what? More of this?) At the same time, it has been utterly unfair to those who are most vulnerable, the citizens of neighbouring countries who subsist at levels most Australians could not imagine.

South-east Asia bore the regional brunt of aid cuts and will receive $688.6 million, down from $1.08 billion in the current year. Impoverished people in Africa, whose aid was lifted under former prime minister Kevin Rudd’s political agenda of securing a seat for Australia on the United Nations Security Council, will also suffer. Aid to Africa and the Middle East was shredded by almost 75% — from $143 million to $52.9 million.

Bishop opted to make no cuts to aid for dependent Pacific nations, as well as nascent south-east Asian nation East Timor, and to snip just 5% off the aid package to Papua New Guinea — now the clear recipient of the largest annual cheque from Australia, worth $477.3 million next financial year. No aid was cut from Nauru.

Unsurprisingly, it was Australia’s other closest neighbour, Indonesia, that took the greatest hit with its aid package — hacked from $545 million to $323 million. It will become clear in coming months just which people in Indonesia will be affected, but it will not be pretty. (For deeper country-by-country analysis see here.)

In the weeks since Tony Abbott linked Australian aid to the failed clemency bid for the Andrew Chan and Myuran Sukumaran, Indonesia has been increasingly vocal about not having asked for aid from Australia and declared it did not need Australian money.

Treasurer Joe Hockey denied there was any retribution involved but, even here, the government’s tin ear on Asian matters is on display. How easy would it have been to hand Indonesia back, say, 10-20% as a “special friend” in a peacemaking offer. Instead, it is now an open sore in what Abbott himself has described as our most important diplomatic relationship. Nice work.

Rudd splashed out on Papua New Guinea and Nauru as incentive for those countries to house Australia-bound refugees in direct contravention of international law — and now Abbott and Bishop have directly linked Australian aid programs, using taxpayer dollars, to its domestic political agenda. In this case, it’s “operation sovereign borders”.

The fact that these capricious cuts have not been matched domestically, sends an increasingly confused and compromised message to the region, and the world — one driven by short-term political considerations on both sides of politics and absent any apparent strategic strategy. They also come as the scale of the humanitarian crisis from northern Myanmar and Bangladesh unfolds. More than 100,000 people have already fled, a number that could double in the next 12 months. Australia will attend a meeting on this in Bangkok on May 29, the Thai government announced last night.

Protecting Cambodia from aid cuts is a major ethical bypass. Australia has rewarded an effective dictatorship while penalising countries like Indonesia, now south-east Asia’s most functional democracy, and Myanmar, which is making early efforts towards eventually becoming one.

This stands in stark contradiction to the narrative that comes from the government about why Australia needs to send troops to the Middle East: to keep Australia safe and promote democracy. Propping up dictators and pulling the rug out from programs that help underpin fledgling democracies like education and health is a curious way of doing that. Education in a country like Indonesia — where vulnerable youth are at risk of radicalisation — is a far more powerful long-term policy than the proven sinkhole of sending money and soldiers to the Middle East

But ethical reasons aside, aid, spent in the right way, is also good economics. Healthy and educated people have a better chance of becoming the business people and long-term consumers that underpin economic growth. These self-evident truths seems to have been missed by a government that is proving to have a very shaky grasp on the complexities of developing economies, and almost no feel for how to engage with the region. This point was expertly made by former China Ambassador Stephen FitzGerald in a recent blog post.

With these aid cuts, Australia has sent itself to the bottom of the OECD’s “generosity index”, according to analysis by ANU’s Howes and Jonathan Pryke.

The poor economics and worse diplomacy of the aid cuts aside, what happened to the Good Samaritans of what is by far the wealthiest country in the region?

a) this is just another industry with its hand out for tax payers monies, just my honest opinion;
b) from memory Indonesia does not want our foreign aid money.
c) most of these countries are protectionist and block our exports AND Australia runs a balance of payments deficit, isn’t that enough to help poor countries;
d) it is really poor governance that creates poverty, and we have plenty of that in Australia AND overseas aid does not seem to help governance of cultures overseas.
e) Australia takes refugees, educates foreign students AND has a massive immigration program, isn’t that enough in helping countries overseas;

Interesting that a “Professor” can’t understand Australia can’t somehow “save” the entire population of our planet?

Cutting aid mid way through programs is darn right inhumane and uncharitable. Maintaining the staus quo with Cambodia demonstrates that the Abbott Government has no sense of decency or morality, but what’s new!

When I got to ‘Rather than doing the hard yards on trimming Australia’s bloated public service,…’ I gave up reading. So as a freelance correspondent in Beijing you’re an expert on Australian public administration? Perhaps you should stick to your day job.

Crikey seems to be increasingly characterised by this type of glib ill-formed analysis. It makes me wonder why I pay a subscription.