Fairfax journos fight for a limited number of redundancy packages. And other media tidbits of the day.

FM radio gorilla cut down to size. Southern Cross Austereo boss Rhys Holleran announced he was stepping down from the radio and TV group yesterday, leaving his chairman Peter Bush to act as executive chairman while a new CEO is found.

Whoever it is will have their work cut out for them at the radio stations. Of Australia’s three major FM radio groups — Southern Cross Austereo, Nova and Australian Radio Network (owners of KISS), Southern Cross is still the biggest in terms of revenues. But its profitability continues to decline, as operating costs remain high while revenues decline, according to an analysis released yesterday by radio consultancy Global Media Analysis.

The analysis, conducted by Bob Peters, charts the rising revenues and profitability of both Nova and ARN, while noting that calendar-year 2014 was “yet another year of worrying financial decline for the faltering metro operations of Southern Cross Austereo”. Aggregate audience numbers for Nova and ARN rose throughout the year until they matched Southern Cross Austereo’s by December. They did this by spending big — operating costs rose significantly at both radio upstarts, with ARN up 21.1% on the year before and Nova’s costs up 14.5%. Southern Cross’ costs were “static”, but, Peters noted, it remained a more expensive station to run.

The decline in listenership, high operating costs and falling revenues meant that while Southern Cross Austereo — for decades Australia’s dominant FM radio company — remained a large player, 2014 had ushered in a “structural shift” with revenues more equally shared between it and Nova/ARN. — Myriam Robin

I’m a journalist, get me out of here! Yesterday’s Media, Entertainment and Arts Alliance media-members bulletin carried the latest news on Fairfax regional redundancies in Victoria. Apparently applications for redundancy have closed, and “MEAA understands that applications are well in excess of total redundancies proposed”. Which is always ominous. Journalists at the regional mastheads should be finding out if their applications have been successful over the next few days. — Myriam Robin

News Corp buyback. News Corp’s decision to resume buying back its shares had the required effect on Wall Street overnight — the shares jumped by more than 3% on a day when the wider market sold off. News Corp shares rose 50 cents, or 3.3% to close at US$15.59 — a bit further away from the year low of US$14.09 they had been threatening to test late last week in the wake of an unimpressive third-quarter profit report, which revealed continuing revenue strains, not the improvement widely forecast earlier in the year by CEO Robert Thomson and senior management.

Investors liked the fact that News would not be forced into spending the remaining US$2 billion or so of its post-split dowry (it was US$3.1 billion back on June 30 last year) on silly deals. Investors feel happier when companies such as News hand money back to them via buybacks or higher dividends. In News’ case, it’s a buyback. The company has already approved a buyback of up to US$500 million, which will lead to just over 15 million shares being repurchased.

But while investors are happy, the buyback does signal that News Corp has run out of ideas and now thinks buying back its shares (and helping tighten the level of control the Murdoch clan has on the company) is a better use of its funds than investing. News announced the buyback yesterday in time for trading on the ASX (it was Sunday in the US so they must work weekend on 6th Avenue in New York). There was no mention of the buyback resumption in the company’s third-quarter results last week. No mention either of the 14.9% stake in Australian regional dead-tree group and radio-owner APN News and Media.

In other words, having spent more than US$1.4 billion on acquisitions and deals since late 2013, News has decided to stop expanding and give money back to shareholders. News joins local media rivals Seven West Media, Fairfax Media and Nine Entertainment Co in announcing either new buybacks or the resumption of buying under existing ones. These companies all have solid cash flows and believe that it is better to do buybacks rather than pay down existing debt (because, at current record low rates, the interest cost is low). News’ decision is especially interesting seeing it’s based in the US where rates look like rising sometime in the next six months for the first time since 2006. News Corp has a US$600 million line of credit in place it has yet to touch. — Glenn Dyer

Change the channel. CBS has given Ten, plus Seven and Nine some good news for the next year by renewing a slew of programs this morning in the US. So old faves such as Survivor (Nine), The Amazing Race (Seven) and Undercover Boss (Ten) were given another season. 60 Minutes and 48 hours were also renewed. Stalker, The McCarthys and Battle Creek were all killed off (they were not big here). Renewed were CSI Cypber (which has yet to hit the screens on Ten here), The Odd Couple (Ten and very boring), NCIS, NCIS Los Angeles, Hawaii Five O, Elementary, The Good Wife and Blue Bloods (all Ten, and a good slab of its prime-time programming). Criminal Minds was renewed (not killed off), which is good for Seven. CSI’s future is up in the air — it has not been renewed, but hasn’t been killed off. Deadline.com reckons a movie finale is in the works. CBS earlier renewed Scorpion, Madam Secretary and NCIS: New Orleans (Ten) and comedies The Big Bang Theory, Mike & Molly, Mom and 2 Broke Girls (all Nine).

Earlier, Fox announced the inevitable and canned American Idol, which will end its run after one final season its 15th season in 2016. Returning are host Ryan Seacrest, who has been on the show since Day 1, as well as the judges for the past two seasons Jennifer Lopez, Keith Urban and Harry Connick Jr. It has been holding up Ten’s Eleven digital channel. Idol’s US ratings have been fading for the past six years. Fox will have to spend heavily to fill the 70+ hours of programming Idol has been taking up each season (that is why those programs are so cheap, despite the apparent cost and glitz). As so many contestants were told, “Idol, it’s time to go”. The final ep in a year’s time will rate its socks off. Idol started as a summer show on Fox in 2002. — Glenn Dyer

Front page of the day. Beating out budget coverage for the top spot on today’s Daily Telegraph is this rather vicious-looking attack by radio mogul John Singleton on Fairfax Media director Jack Cowin. Cowin brushed off the scuffle, explaining, “It was a long lunch — you know how these things go.” We suppose millionaires will be millionaires … 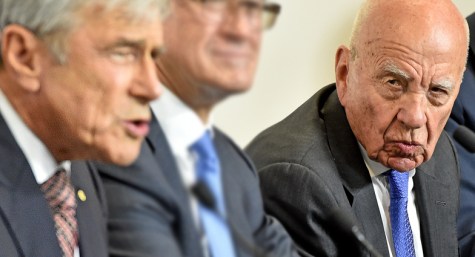 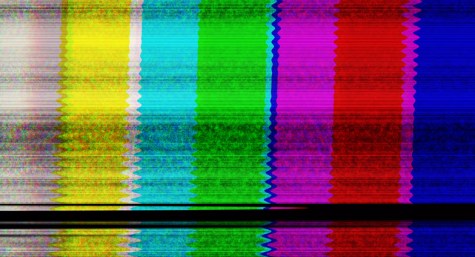